Anupama emotionally asks Samar, Toshu, and Pakhi to take care of themselves and each other. She points at their bad hobbies and asks them to change it. They all 3 say that they will handle everything here, so she should handle her newly married life and new relationship with Anuj without any baggage and fear. They say Shah house will continue to demand something or other from her, but she should ignore and concentrate on her new life.

After some time, Anupama gets ready as a bride and Anuj as a groom. Taron Ka Chamta Gehna Ho.. song plays in the background. Meenu praises Anupama that she is looking pretty. GK says he never thought he would see this day. Devika says she had lost hope. Anupama recalls all the hurdles and recent events happened in her life. She says she is ready to become Anuj’s. Anuj says he was always Anupama’s and today officially be hers forever.

Shahs reach the wedding venue. Vanraj watches the family enjoying. Kavya suggests him to attend the wedding reminding him of Anupama’s help during their wedding. Samar informs everyone that baraat is on the way. Hasmukh hopes Leela also attends the wedding and Kavya hopes Vanraj attends the wedding. Samar says it’s okay as they are all here to compensate for the happiness. Anuj reaches with Baraat and dances on Meri Shadi Karwawo..song. Shahs rejoice to see that. Kavya welcomes baraatis with garland. Devika says she is also from the bride’s side. Kavya says that’s after she enters the venue.

Everyone rejoices to see that. Anuj seeks Leela’s blessings and reminds his words that one day Leela will welcome him wholeheartedly. Leela smiles and hugs him. Taunting neigbhors join in next and say they came to bless Anupama today. Hasmukh says people become good in good people’s company. GK says however strong evil prevails, always goodness wins.

Anupama feels nervous waiting for the rituals. Vanraj watches her from a distance. Anuj gets eager to meet Anupama. Shahs pull his legs. Anuj insists to call Anupama as muhurat is nearing. Kinjal says he will be stunned to see mummy as a bride. He jokes to sprinkle water on his face if he faints. Anupama enters in style with girls dancing around her. Samar and Toshu lift her up and take her to the stage. Anupama shyingly shows Anuj’s mother’s ghungroo in her legs. Anuj gets emotional seeing that. Anupama then dances on stage with Anuj on Phool Mangoon Na Karaar Mangoon… song. 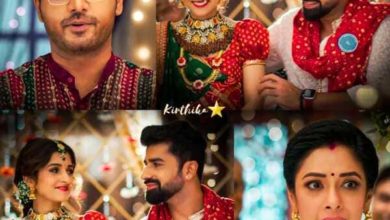 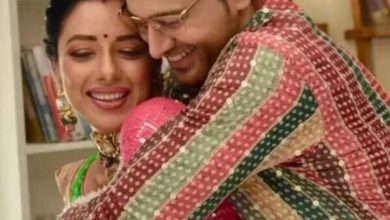 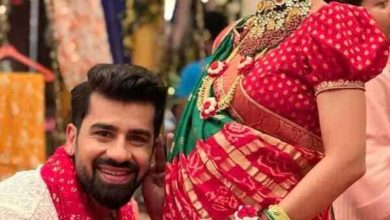 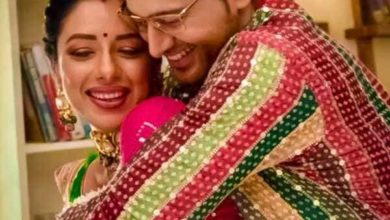