Leela and Hasmukh meet Vanraj. Vanraj holds their hand. Kavya comments that doctors gave pain killer to V, but there is no pain killer for parents’ pain seeing their son in this condition. Hasmukh encourage Vanraj to get well soon to play with his grandchildren. Vanraj signals how is Anuj. Leela says he is in operation theater and says he need not worry as she will not believe even god if he says that Vanraj is behind the accident.

Adhik calls Barkha, but her phone is not reachable. Anupama comforts GK and looks at the OT. Toshu comforts her and asks her to go home and rest for sometime. Anupama says she will not leaving Anuj in this condition and asks him to get some milk and biscuits for Leela, Hasmukh, and GK and some sugar water for her as she is feeling dizzy. Toshu brings juice for her. Apne To Apne Hote Hain… song plays in background.

Kavya suggests Dolly that she should take Little Anu to hospital as she needs mummy. Dolly feels sorry for Little Anu. Pakhi says even she will accompany Dolly. Anupama recalls Anuj sending her a voice note and plays it. She hears a romantic shayari and imagines Vanraj sitting beside her and reciting it, expressing his love for her. She gets into her senses when Samar shakes her and takes her out to meet Little Anu and Pakhi.

Anu hugs them and says she had juice but didn’t get energy and got energetic when she saw them. Pakhi asks about Vanraj. Anupama says he is fine. Little Anu asks what about her papa. Pakhi says even he will be fine. Little Anu shows her, Anuj, and Anupama’s photos and gives her bracelet for Anuj. Pakhi feels guilty for hurting Anuj’s sentiments and says she will apologise him once he gets well.

Kavya meeets Vanraj. Vanraj recalls the accident. Kavya says she thought they have changed, but she still loves him immensely. She asks if he did something. He murmurs something in her ears. She leaves his hospital room. Dolly asks Anupama not to worry about Little Anu and takes her and Pakhi away. Kavya rushes to Anupama and sends her to Vanraj’s room. Vanraj says Anuj.

Anupama says Anuj is undergoing operation. Vanraj says he pushed Anuj from the cliff. Anupama is shocked to hear that. Vanraj’s condition worse. Samar opens door and hears their conversation. Doctor visits him and asks him not to speak. Anupama asks what happened to him suddenly. Doctor says he is restless and gives him sleeping injection.

Samar tells Anupama that he heard Vanraj accepting to push Anuj from the cliff. Anupama refuses to believe that Vanraj pushed Anuj down as he is short tempered but cannot kill anyone, maybe he wanted to say something else. Barkha reaches hospital and asks Ankush and Adhik how the accident happened.

Ankush asks if she pushed Anuj from the cliff. Barkha refuses and says though she has issues with Anuj, she cannot think of harming him.
She asks about Anuj’s condition. Adhik says his condition is critical and he is undergoing operation. Barkha looks shocked.

Doctor comes out of OT and informs Anupama that Anuj’s condition is still critical. Leela asks about Vanraj. Doctor says his condition is better and once his vital sign parameters stabilize, they will shift him to a normal room. He asks them to decide a room. Leela asks toshu what did doctor mean. Toshu explains the different rooms in the hospital according to budget. Leela says even hospital has become like a hotel.

Anupama asks Toshu to book a deluxe room for Toshu. Leela says her son is a middle class man and hence they should shift him to a normal room. Toshu says even he is jobless or else would have thought of a deluxe room. He asks Hasmukh to go home and rest. Hasmukh asks Anupama to call him if need be and leaves for home.

Precap: Leela emotionally blackmails Anupama not to get her Vanraj arrested. 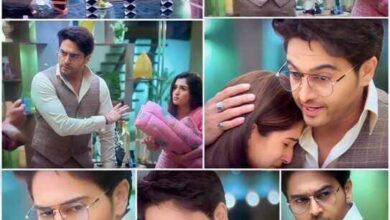