Anuj searches Anupama and Malvika and find them playing hopscotch game in office’s parking lot. They joke when he questions her and then reveal they are competing. Anuj thinks even he wants to play, but doesn’t want his photo in newspaper’s front page playing hopscotch tomorrow. Anu wins. Malvika says she can ask anything now. Anu says a simple thing. Malvika says if she had won, she had asked her to marry Anuj. Anuj thinks why didn’t she win then. Anu asks her to attend new year party.

On the other side, Samar walks to Nandini and Kavya and says he came to invite for new year party, but seeing a bonfire already here. He thanks Kavya for setting up fire. Kavya says he is mistaken. Nandini says maasi is concerned. Samar says she is talking about breaking their house. Nandini says even mummy is staying away from family. Samar says helplessly. Nandini says mummy is happy now, he should understand that maasi is feeling lonely after Malvika’s entry and Anu aunty is not doing anything regarding that.

Samar asks her not to drag mummy in it and not to forget that Malvika is Anuj’s sister who saved his life, protected him from jail, protected her from Rohan, saved their dance academy, and the house which they are talking about is because of Anuj’s favor or else they would have been on road because of Rakhi’s evilness; why can’t they keep Anuj’s sister for 2 days in their house, Malvika is important for Mr. Shah’s career, she will go away in 3-4 days; if Kavya is concerned about the fights at house, its the people who are fighting and not walls and doors and if they change themselves, everything will be fine.

Nandini says point here is Maasi’s husband’s colleague is staying at their house. Samar asks if she didn’t think about it when Kavya used to visit their house daily and stayed in their house after fighting with Anirudh, Kavya’s birthday cake was cut on mummy’s birthday and nobody thought then how insecure mummy was feeling; he is not favoring both situations, but she has to reap what she sow.

Nandini asks him not to speak to maasi like this as she is already in problem. He says he is not and Kavya’s problems will not lessen if she tries to increase other’s problems, so she should focus on her life and problem, she can throw new year party but stop trying to ruin other’s lives. He finally warns Nandini that if she thinks her maasi is troubled in that house, she has a choice to marry him and come to that or cancel their alliance.

Anu tells Malvika that some incidents are not easily forgettable, even she faced such an incident, she saw Kavya and Mr Shah on her bed on her 25th wedding anniversary, its an unforgettable event in her life where her she saw her husband with another woman; one has to move on and cannot be stuck in that one moment; she doesn’t know what happened in Malvika’s life, but she has to learn to bear the pain and move on; they can learn to smile and leave the pain behind, etc. Malvika gets convinced with her long moral gyaan.

Shahs get ready for new year party and plan a game. Baa says their new year used to start early morning, but new generation parties whole night on 31st and sleep till 10 a.m. on 1st. Vanraj brings gifts for all. Pakhi says its already 10 p.m. and Anuj, Anupama, and GK must be coming. Kinjal says GK has gone to Dwarka to watch new year’s sunrise. Kavya says even Malvika is not coming.

Malvika walks to Anu and Anuj wearing gown. Anuj thinking she will not attend party says he will stay back with Mukku. Malvika removes her gown revealing her party dress and says she fooled them and will attend party. Anuj feels happy. Malvika goes in to get ready properly. Anuj gets romantic and offers a flower to Anu. Their eyes lock. Aye Mere Humsafar.. song plays in the background. Malvika returns and alerts them. Anu keeps flower in her bag silently and then gives party gifts to them. Anuj senses Malvika’s panicked faced and comforts her holding her hand.

Shahs play game and wait for Anu to come and cut cake. Pakhi says mummy will gift her handmade gift like every year. Kinjal asks why is mummy late. Kavya says because of Malvika. Malvika panics seeing a neighbor fighting with his wife and running behind her to hit her. Neighbor’s family interferes and takes them in. Anu asks woman if she is fine and gives moral gyaan that its shameful that even rich family girls face domestic violence. Anuj gets tensed seeing Malvika getting a panic attack and shivering sitting in a corner.

Precap: Anuj notices Malvika’s depression medicines. Anu tries to comfort panicked Malvika and asks what happened that night. Anuj says he is responsible for Mukku’s condition as he got her married to a beast. 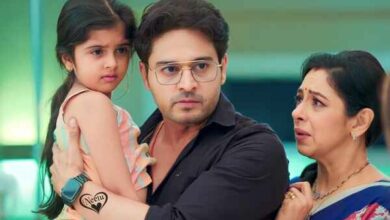