The Episode starts with Priya saying I promise, I will keep this relation and not bring love in it. She goes. Ram thinks Adi and Brinda fill nonsense in my mind, Priya said it right, she doesn’t love me. Nandini says Ram has handled all the business, if we lose him, then we will lose everything, Priya can snatch anything from us. Shubham asks her to relax. Priya says a woman has to apologize always, I will say sorry for Mami’s mistake. He asks what will we do now, we have to bring Priya out of this marriage, if Akki does anything to Shivi, Akki will get blamed, I was with Sid, he is irritated, you know Sid, he gets new ideas, there is an idea, both the relations will break, if we trap Akki, then Priya will leave Ram and run away. Nandini says that’s true. They see Priya at the door. Priya says I know you were talking about me. Nandini says no, its not like that. Priya says no, I know, you felt bad, whatever Sarika told you. Nandini says no, its nothing like that.

She starts a drama. She says Shivi just loved Akki, why is she upset. Priya says I understand your problem, Mami did wrong, no one will misbehave with Shivi there, she is like me, she can stand for herself, Akki will never hurt her, my sisters love Shivi, Meera loves her, I will always support her, you know why Mami told all that, there were many problems faced by my family, their behavior is also justified, its not right, its all past now, I don’t want Shivi to sign any papers that hurts her self respect, she doesn’t need to prove her love for Akki. Nandini says you are so good, Priya, but the fact is, we did bad with you, Shivi may bear the punishment, when Ram said that he burnt the papers, I was so happy. Shubham says yes. She says I want to rectify the mistake. Priya says it was just a misunderstanding, we can’t change it now, we can just move on, diwali is coming, its a new year coming, we will make a new start, both the relation are turning strong. He says she is right, we have to rectify our mistakes. Nandini says so true, I just want my kids’ happiness. Priya says don’t worry, Shivi and family will come on Laxmi pujan.

Meera says I made badam halwa for you. Ram asks did you make it at home. Ram says don’t tell Priya, no, tell her, she is jealous of our bond. He eats the halwa. She says she isn’t jealous, she also cooks good food. He says yes, she made tasty biryani. She says good, why did you burn the marriage contract. He says Priya explained me that trust is the basis of any relation, no paper is needed, Priya and I are different, sometimes I feel we are similar, I get confused, we understand each other at the time of problems, don’t know how. She says I will tell you how, you both have similar nature, you both want to respect each other, its imp that thinking is similar. Ram says yes, I feel I can’t understand her. She says she has learnt to keep distance, she feels why is someone doing good for her, no one did good for her, not even her dad, she feels if anyone is taking care of her, then she can get cheated, I explained her, but she doesn’t understand, its tough for her, maybe this will get simpler with time, you may explain her that she can trust. He gets a call. He says yes, I m coming. She says I know its not easy to love Priya, but you will win her heart. He says you always say right, Shubham’s business deal is getting signed on diwali day, dad used to go to temple with deal papers, I will do this now, I will pray for all the new relations, I will go. Sandy comes and asks about the video of love confession. Ram says it was for Supriya, not Priya. Sandy teases him. He goes. Meera prays for them.

Ram meets Brinda. He says she didn’t say no, like she always say. Brinda asks him to relax. She says Priya doesn’t express feeling easily. Adi comes and tells about a problem. She asks him to not distract them, they are talking about mall proposal, Priya didn’t say yes. Adi ask do you want Priya to say yes. Ram says no, Priya talks formally, she doesn’t take my name, Ram, we had a deal that she will not love me. Brinda says maybe she likes me. Ram says no, Priya is like coconut. She asks do you have feelings for her. Ram asks did you go mad. Adi says Shashi’s matter… Ram says I m going. Brinda says Ram and Priya… Adi says Shashi… Brinda says Ram didn’t say no, he used to say love happens just once, he also loves Priya. Adi hugs her. Shashi scolds Vedika. He says I have contacts in the bank. She says I will spy on you, if you are bankrupt, you are ruining my life also, will Ram deal with you if he knows this. Priya waits for Ram. She says I will call him, no, he will think I always stop him. She talks to Ram’s pic. She says you don’t take care of your health, you are just like a kid, you don’t even do exercise.

Precap:
Ram asks are you concerned for me. Priya looks at him. He gets dizzy. His nose bleeds. He shouts Priya. Priya runs to him. 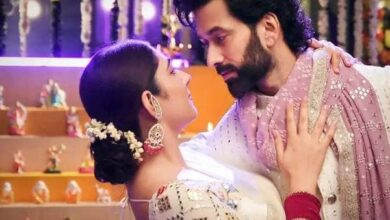 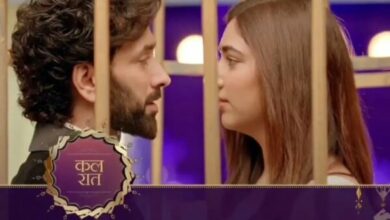