The Episode starts with Rishi asking Lakshmi to have sweets. Lakshmi refuses. He says he got it for her and asks her to open her mouth, says she has to eat for him. Lakshmi opens her mouth. Viraj says they love each other and says even I want to have sweets. Malishka gets angry and tells Karishma and Sonia that Viraj came here to see the diwali and says I will add extra attention to the Diwali, and asks will you dance with me. She forwards her hand. Rishi thinks she is asking him and forwards his hand. Malishka holds Viraj’s hands and asks him to dance. She asks Rishi to play the music for them. Everyone dances. Neha sees Ayush and Shalu having an eye lock and asks what is going on? Shalu says he has beaten me. Ayush says I saved her, else she would have fallen down. He asks Neha if he is good. Neha says you are sweet and says I understood you. Shalu asks Ayush to come with him. Neha asks Ayush to come with her. Shalu says he is my friend. They both try to drag him. Ayush falls with Shalu and Neha falls on Sudeep. Rano comes there and shouts. Ayush gets up and asks Sudeep to go. Rano asks Neha, what she said, and says Servant is wooed by her. Neha asks her to tell after thinking. Rano takes her from there.

Malishka and Viraj dance closely. She makes him hold her waist while dancing. Kuch toh hai tujhse raabta plays….Rishi gets jealous seeing them dancing. After dancing, Malishka hugs Viraj. Rishi holds her hand and takes her from there. Shalu brings Ayush downstairs. Bani asks where are you taking him? Shalu leaves his hand. Ayush asks why she was holding his hand with the right. Shalu says I was saving you. Bani asks from whom? Ayush asks if she is like this from before. Neha comes downstairs. Ayush says Neha, what’s up? Shalu holds his hand and takes him from there. Bani thinks what happened to Shalu. Neha thinks she will win the challenge.

Malishka asks Rishi to leave her hand and asks what is this misbehavior? Rishi takes her to room and says you will not go from here. Malishka says this is your wife’s room, who saved you risking her life. Rishi asks her to hear him and says I know that you are upset with my behavior. Malishka says she is upset, as she came to know about the truth, his lie etc. She says that Rishi was not mine who was in hospital. She says you are changed and you are not mine. She says that Rishi was mine who married on my saying and took off the chain and ring for me. She tells that their relation is over and asks him to leave her and moved on. She says I don’t care for you now. Rishi asks him to tell truly, if she really don’t care for him. Malishka says no, and will never do and asks him to move. He asks if she is going to Viraj. Malishka looks at him.

Neelam asks Lakshmi to call Rishi. Lakshmi is going from there and collides with Viraj. He holds her hand. Lakshmi says she is searching Rishi, as Mummy ji called him. Viraj says shall I come with you, and search Malishka. Lakshmi asks him to come. Malishka asks what did you say? Rishi says you are going to Viraj and was dancing closely with him. Malishka tries to hit him. Rishi says I love you 5 times. Malishka says just leave me. He says you know that we love each other and asks why is she behaving stupid. He asks why did you bring Viraj here, you knows well that we don’t get along since childhood. Malishka says no, she brought him to celebrate Diwali. Rishi says you brought him to make me jealous. Malishka asks what is your problem, if I want to explore and moved on in life. Rishi asks her if she wants to have relation with Viraj?

Lakshmi asks why is she smiling? Viraj says just like that. Lakshmi says they shall check in room for Lakshmi. Viraj asks her to come. Malishka asks Rishi to think whatever he wants and says I brought Viraj here as he wanted to see traditional Diwali and your wife meet him nicely. Rishi asks why are you dragging Lakshmi in our fight? Malishka says she is the reason for our fight. Rishi says don’t bring her between us. Malishka says she was already between us. She says you can’t be mine, as you have become of Lakshmi. He says no, I am just yours. Malishka says I want to trust you, but…Rishi says I am your old Rishi. Malishka says you are not my Rishi. Lakshmi says this is my room. Rishi hears Lakshmi. Lakshmi opens the door and comes inside.

Ayush and Shalu are in the garden area. He asks what is going on? He says you asked me to sit with you until you finish the food. He says I will become old, as your speed is slow. Shalu says you made me fall down. He asks her to take almonds while leaving. Shalu asks if you are like this from before. Ayush asks Shalu to hug him and end the differences. Shalu asks if he has gone mad and says she will not hug anyone. He says I still love you. Shalu is about to hit him. Neha calls him and asks him to come to kitchen. He asks if Siyappa happened there. Neha says she needs his help and asks him to come. Ayush says I am coming in 2 mins. Shalu asks if Neha called? Ayush asks if she was spying on him and says bad manners. Shalu asks him to stop. Neha keeps the flour on the upper rack and thinks when he comes here, she will ask him to take the box down and make it fall on them. She says then they have to take the bath. She says she will come out of bathroom and will splash her wet hair on him and will trap him etc.

Viraj says Rishi and Malishka are not here. Malishka asks Rishi, why did he bring her to bathroom and hiding her here. Rishi says it is Lakshmi and his room, what he would have told her. Lakshmi is about to go out and finds the photo frame fallen down. She says how did it fall down. Viraj asks her to take advantage of the situation and tell her dark secret. Rishi gets angry and asks how dare he? Malishka looks at him. Viraj asks Lakshmi what is the reason for her marriage with Rishi. He says everyone has reason here, property, relation, kundali matching and kundali dosh. He says there might be a reason for your marriage with Rishi, as I don’t believe that you will love arrogant Rishi. Lakshmi says she shall tell Mummy that Rishi is not here. Viraj says I understand that your marriage is a compromise as well. Lakshmi says marriage is a compromise most of the time for the girls and many times, they don’t love their husbands. She says you might not have heard that they love their husbands after marriage and tells that in our place, we have love after marriage. He says you don’t love Rishi right. Lakshmi says I don’t love him after marriage, as when I was getting married to him, I was already in love with him. Rishi hears her. 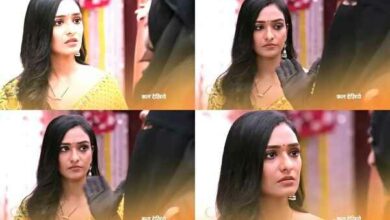