The Episode starts with Dadi inviting someone on call. Ahana comes there and asks her to wear the dress sent by Lakshmi Bhabhi. Dadi asks her to tell what happened suddenly. Ahana asks her to come ready at 7:30 pm. Devika comes to Rishi and gives him clothes, asking him to wear it, and come at 7:30. She says there is a delay of 30 mins. She comes to Karishma and Sonia, and give their dresses. Ahana comes to Neelam and Virender and asks them to come wearing these clothes at 7:30 pm. Neelam refuses to wear. Virender asks her to wear it for Lakshmi. Malishka comes home and thinks she will see Lakshmi’s tamasha infront of everyone. She looks at the decorations. Rishi and others also come. Rishi asks what is all this? Malishka thinks what the hell, how can everything will be so beautiful? Lakshmi congrats Virender and Neelam for the marriage anniversary. She asks how is the decoration. Virender says very nice and unique like you. Karishma says seriously, did you like it? Dadi says even I liked it. Ahana and Devika tell that it is so beautiful. Karishma says but what about these outfits, it is tacky. Virender says it is absolutely beautiful. He asks everyone to look at his wife, and asks if anyone looked so beautiful like her. Rishi says nobody can be beautiful than my mom. Neelam asks Rishi not to support him. Rishi says it is truth. Virender thanks Lakshmi for her beautiful personal touch and says if I was Raja or Maharaja, then would have given necklace to you. He asks Rishi to bring the gift and give to Lakshmi. Malishka is tensed. Karishma asks Malishka to come. Ahana and Devika asks her to come. Malishka says I thought that the party will be modern, but it is Desi. Ayush says it is so good. Ahana and Devika tell that they like it. Dadi says she is feeling real celebration in real life. Devika says positive vibe is coming. Ahana says it seems like function is happening at home and not in hotel. Virender says due to Lakshmi’s personal touch.

Karishma says it is not bad, but is old fashioned for Canada and Australian friends. Dadi says the persons who are connected by roots will like it. Virender says they will like it. Karishma asks Malishka about the lunch. Malishka says good and shows the big greeting card with their wishes. Neelam says it is so beautiful, thank from our behalf. Malishka says she thanked them. Rishi comes back. Virender says sorry for asking Rishi to bring the gifts. Dadi asks Rishi to give the gift. Devika keeps her hand on Lakshmi’s eyes. Rishi makes Lakshmi wear gold bangles. Everyone claps. Lakshmi looks at the bangles and looks at Rishi sadly. Ahana looks on. The guests come and call Neelam and Virender. Rishi asks Lakshmi if she didn’t like the gift. She says no, it is good. He looks at Malishka and goes. Shalu says you told that it was love band. Lakshmi says may be he wanted to give me later. Ayush comes to Lakshmi and says you have done wonder. He asks how did you get such an idea? Lakshmi says Gurucharan Chacha. She tells that she had called him. A fb is shown. Lakshmi takes his help to get the decoration stuff from the shop. She says he had brought such things which don’t need needles and can fix fast. Shalu teases him and goes. Ayush asks where is he? Lakshmi says he will go home and come with Chachi. She makes him taste lassi. Ayush says guests will tell how is it? The guests take the lassi and like it.

Virender asks Neelam to take it, as it is with Lakshmi’s touch. He says later. Karishma says until when Lakshmi will handle, everyone will get bored, when there is no music. Sonia says how the decoration happened so soon, we have ruined it. Karishma says no idea and asks her to come. Dadi hears them. Lakshmi looks at her gold bangle and thinks that love band is more valuable to her. Rishi looks for Lakshmi. The guest come there and compliments Rishi to be Punjab’s munda. They ask about the couple for tonight. Rishi asks them to come. The guests from Australia thanks Neelam and Virender for calling them. Virender thanks them for coming them. The guy says there is no match for Punjab. The lady says there is no match for Punjabi bahu. The guy says Lakshmi has done these decorations. The lady says search Lakshmi like bahu for us, our life will be set. Rishi hears them. Malishka looks angrily.

Dadi scolds Karishma and Sonia for ruining the decoration which forced Lakshmi to change it. She scolds Karishma and threatens to tell Neelam. She says she has good heart and don’t make scheme like you, and asks her if she don’t feel ashamed to ruin bhai and bhabhi’s big day. Karishma stops her. Dadi says you are not apologizing, couldn’t handle your home and tried to ruin it. Sonia says Dadi, why are you upset, everyone is happy seeing the Punjabi theme. Dadi asks her to stay away from evil, if she wants to set her life. She goes. Sonia says if Dadi tells this to anyone. Karishma says she wants happiness and will not tell. She says I don’t want Lakshmi to stay here.

Lakshmi reminisces her mother, telling about living and dying with her husband, and tells that Mata Rani blesses the couple to stay for life during anniversary. Fb ends. Lakshmi prays to Mata Rani to bless them. She thinks to go out and bring something from Devika. Rishi goes behind Malishka. Lakshmi comes infront of him. Rishi asks didn’t you like the bangles given by me? Lakshmi says I liked it, but. She says I thought you are about to give me something and looks at love band in his heand, says it is very good. Rishi coughs and says it was given to me by my friend.

Precap: Malishka asks Rishi to say I love you. He says I love you in her ear and hugs her. Lakshmi comes there. Rishi breaks the hug and looks at her. 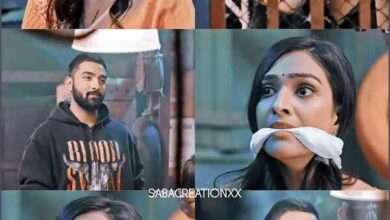 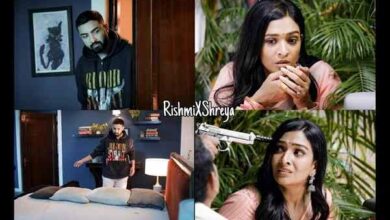 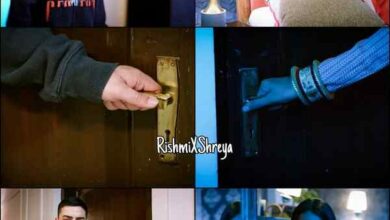