The Episode starts with Balwinder sitting in a car and is about to drive off. Ayush says if you go then Police will arrest you. Balwinder drives the car. Ayush sits on the bike and goes behind the car. Lakshmi asks Rishi to drink water. Rishi drinks water. Neelam asks if he is feeling pain. Karishma says the injury is deep. Neelam asks when will doctor come? Virender says he will be coming.

Rishi says I hope Ayush catches him. Karishma says someone is using him against our family. Neelam says that’s why we want to know that person’s name. Karishma says may be there is no person. Malishka says if there is nobody then we shall not worry. Rishi says if I had not stopped Balwinder that day, then he would have taken Lakshmi that day. He says I will go and catch him.

Neelam says you will not go and says don’t know what happened to you that you don’t agree. Rishi says I agree to your sayings. Virender says Doctor would be coming. Doctor comes there and asks what happened? Rishi says it is a small injury. Doctor asks how did it happen? Virender says with a bottle. Doctor asks who has done the dressing? Dadi says Lakshmi. Doctor says it is good and gives him medicines to take. He leaves.

Rishi asks shall I go now? Neelam says no. Virender asks Rishi to take medicine and rest, says Ayush will do the work. Ayush hits someone while riding the bike fast. He continues to go behind Balwinder. Rishi says Ayush went alone, I shall go. Neelam refuses to let him go and asks him to take medicine. She asks Malishka to go with him, and give him medicine and be with him.

Neelam says she risked your life many times. Rishi says you are thinking wrong. Karishma says Rishi. Rishi says when there is Lakshmi, there is nothing to worry about. Ahana says Lakshmi bhabhi can forget herself, but not others. She came as your shield, but she became everyone’s shield. She says she also trusts her fully.

Rishi takes medicine. Lakshmi thanks him for trusting her. She says she is thankful to Ahana for supporting her. Rishi says you will get love if you love, will get support if you give and will be hurt if you hurt others. He pinches her and asks her to sit. He says you are the part of the family member until our divorce happens.

Lakshmi gets sad. He asks her not to make sad and says you know what I mean. She moves and he makes sound as if he felt pain. She blows on his injury ad says sorry, and holds her ears. Rishi asks if she is apologizing. Lakshmi says really sorry. Rishi laughs and says he can’t control. Lakshmi asks if you are joking.

He says he will take the pic, this is a memorable moment, says it is a rare moment that wife is apologizing holding her ears. He takes the pic. Lakshmi asks if he is not feeling pain. He says I have forgotten all the pain as you have apologized to me and said sorry. Lakshmi thinks she is worried for Ayush. Ayush meets with an accident and falls down on side of road. Ayush and Lakshmi’s pic falls down.

Karishma complains to Neelam and Virender that Lakshmi brushed off her hand. Virender says Lakshmi wanted to bandaged Rishi’s hand. Karishma says Malishka would have done that. He asks her to go and sleep. Karishma goes. Neelam says I am going to Rishi and can’t leave him trusting Lakshmi. She says I will take care of him. Virender says will you do the same as Karishma and says Rishi is capable to take care of himself.

Rishi recalls Balwinder telling that Lakshmi is carrying his child and recalls taking her forcibly. He gets up angrily and hits his hand on the wall, but Lakshmi keeps her hand on the wall to save his hand. He says sorry and asks why did you keep the hand. Lakshmi says it is good that I kept my hand on the wall, atleast you didn’t get hurt. She says if you get hurt then I feel the pain.

Rishi looks at her and smiles. She asks what happened? He says nothing and asks did you see any movie recently? He says you didn’t watch after marriage as far as I remember. He says you had said the dialogue that if I get hurt then you feel the pain. He says I thought you have stolen this dialogue from romantic emotional movie, if you had watched horror movie, then would have walked on the wall, if watched comedy movie, then would have talked strange talks, and then I would have laughed and you would have felt pain if I had felt with constant laughing.

He laughs, saying if I get hurt then you feel the pain. Lakshmi asks if you are making fun of me. He says no and asks do you really mean what you said, that you will feel the pain if I am hurt. She says yes. She says I didn’t see the film, but had heard the song where this is the line. He asks which song? Lakshmi says it is a famous song. Rishi asks which song. She says I don’t remember.

He asks why did you keep your hand when I was about to hit the wall. She says I did this, as if you get hurt then I will have to hear the scoldings. He asks really? She says yes. He asks her to say what her eyes are saying. Song plays tu hi toh hai mera junoon plays….. 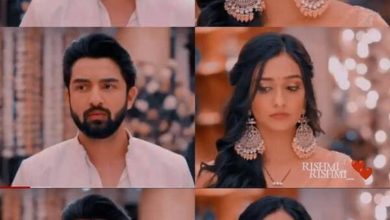 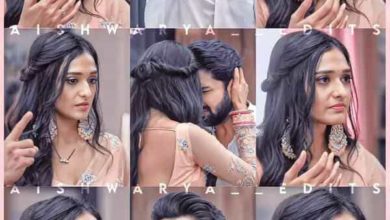 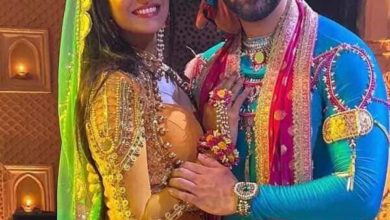