The Episode starts with Dadi appreciating the biniya made by lakshmi. Virender says love is mixed in it. Rishi says love wali biniya. Neelam and Karishma looks on. Ayush drops Rano and Shalu home. Rano invites him to come inside. Shalu says he must be getting late. Ayush gets down and says he will come. Rano asks him to come fast. Malishka comes to Oberoi’s house and greets Neelam. Lakshmi asks how are you? Malishka says I am fine. Lakshmi says if you had come sometime back, then would have eaten dinner with us. Dadi says you missed Biniya made by Lakshmi. Virender says even Rishi had it and praised it too. Malishka says she didn’t come for dinner, else would have informed Karishma. She says she came for Viraj’s work. Rishi says your friendship is growing with Viraj more. Malishka says you don’t have time for me, since you got married, and not available for me. Lakshmi says why do you think that your right on him got less, and says you have the same right on him as before. Rishi says even Lakshmi understood. Malishka says whatever I said is right. Lakshmi asks did they have a fight? Malishka says we are fighting due to you, as he left me for you. Everyone gets tensed. Rishi asks what are you saying? Malishka asks didn’t you leave me?

Rano calls Neha and asks her to come out. Neha asks what happened? Rano asks her to apply lipstick and talk with love. Neha applies lipstick. Rano asks where is your Papa? Neha says he went with Bani. Neha asks if any guy is coming to see me. Ayush comes there and says Rano saved me. Rano says I called you as my damad. Neha says wow. Rano scolds Shalu for troubling Ayush. Shalu tells that he was teasing her, and tells everything whatever happened. Neha says he is Ayush. Shalu says it is between Ayush and me. Rano says there is Neha between you both and says it is good that I saved Ayush, else Shalu would have got him jailed. Shalu says I would have saved him after sometime. Rano scolds her. Ayush says it is enough of scolding and says I will leave now. Rano asks Ayush to stay back and says Neha will make you eat sweets. Neha says I will order and then says I will make. Ayush asks Shalu not to have aloo and goes.

Malishka says he left me in the important meeting and said that he is going to Lakshmi. The oberois’ relax. Viraj comes there. Virender asks him to come. Viraj says Malishka must have apologized for coming in your lives suddenly, but I took permission. Lakshmi gives him icecream. Viraj says he came for a special purpose and tells that he came from London to attend his Dada ji’s birthday tomorrow at 8:30 pm. Neelam says we can’t come, as my closed friend’s daughter is getting married tomorrow. Viraj asks if everyone is going? He says I want to make the day memorable for Dada ji. Neelam says we can’t come. Viraj asks what about Rishi, Lakshmi and Ayush. Neelam says ok, they will come. Malishka says tomorrow’s party is a theme party and everyone shall dress up as famous movies characters. Viraj says next time, I will call and come. He says he can’t guarantee about Malishka and leaves. Malishka says bye, looks at Rishi and goes out. Neelam and Virender go to their room. Lakshmi tells Rishi that they shall dress up as Heer, Ranjha. Karishma and Sonia look at Lakshmi. Dadi thinks Karishma is upto something again and I shall keep eye on her. Karishma tells Sonia that Lakshmi will become Heer and will make Rishi as Ranjha. She says Lakshmi will not become Heer as we will ruin her dress when she is about to go, and then she will not go. Sonia says then Bhai’s Heer will become…Karishma says Malishka.

Malishka comes to her room and tells Kiran that she is getting crazy. She says since Lakshmi came, I am losing Rishi. She says he is just mine, I felt Lakshmi has more right on him. Kiran says he is just with her for a year, but he shall love you. She says you are behaving as an obsessed lover and shall win his heart and behave nicely with him. Malishka asks shall I give my life and says I want him fully and don’t want him to care for Lakshmi. Kiran asks her to change her perception and says the guy can become of a woman, only when he becomes her husband. Karishma calls Kiran and asks her to make Malishka as Heer. Kiran says Lakshmi is becoming Heer. Karishma says I am destroying Lakshmi’s dress and says if Malishka and Rishi become Heer and Ranjha then they will get confidence. Rishi asks Lakshmi if she is sure that he shall wear these clothes. Lakshmi says yes. He goes to change. Lakshmi finds the dress cut, and thinks how did it tear, it was okay yesterday. Sonia and Karishma look at her, and Sonia recalls cutting Lakshmi’s dress.

Karishma comes inside with Sonia and asks Lakshmi why she is not ready and tells that Viraj called twice. Rishi comes there ready. Karishma says they are also coming with them. Lakshmi asks him to wait for her.

Malishka and Kiran come to the venue and compliment each other. Malishka says where is Viraj and his Dadu. Kiran says Viraj is there. Viraj calls Malishka as Simran. Malishka says she is Heer now. He asks where is your Ranjha? Kiran asks where is your Dada ji? Viraj says he is not less than a hero. Kiran asks when will he come? Dada ji is seen getting ready in blazer and sprays perfume. He walks out of his room. Malishka says Dadu came. Kiran says happy birthday and hugs him. Malishka hugs him too. Dada ji calls her Gudiya and asks Kiran about her husband. Viraj says Dadu has forgotten. Dada ji asks about Malishka’s dad. Kiran says we are divorced. Dada ji tells that he is looking as Amitabh Bachchan of Kabhi Khushi Kabhi Gham. Kiran sees her ex husband and takes his name. Malishka looks at Abhay.

Precap: Lakshmi comes wearing Heer’s costume. Rishi calls her Heer and says beautiful. Ayush and Shalu get closer. In the party, Lakshmi and Rishi begin dancing. Malishka comes to Rishi while dancing. Kiran asks Malishka to do something before Rishi’s heart stop beating for her. Malishka sees Rishi blowing on Lakshmi’s eyes, and gets upset. Rishi gets upset. Malishka thinks she knows well, how to get Rishi. Lakshmi tells Rishi that she knows the reason for Malishka’s anger, as she came in his life. 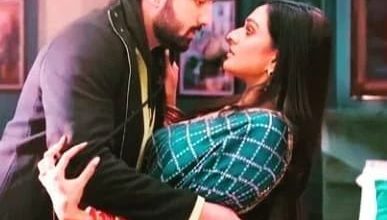 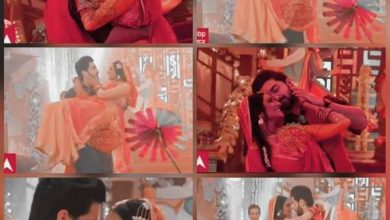 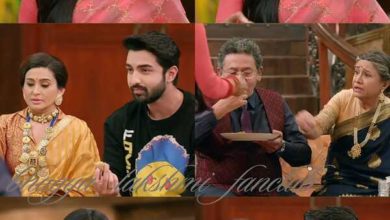 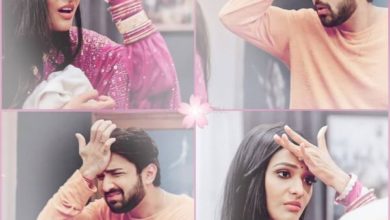