Lakshmi replies this is a lot of money and really valuable, people like her have to work a lot to earn even a small amount so they can just take it away, Karishma is about to close the bag when Rano stops her.

Sonia questions Malishka to repeat what she will do once again when Malishka replies she is going to kill that Lakshmi if she returns, she is going to tie her hands and break every bone, to make sure she is not worthy of Rishi, Sonia questions if she has gotten mad and it is wrong when Malishka replies she has gotten scared and cannot understand it because Neelum aunti has gone to bring Lakshmi for Rishi, Virender questions what is happening when Sonia replies that Mom went to Lakshmi’s house with the money, Devika also told her that mom sent Dadi and Devika to the locker, and when she called Karishma, she found out that they are going to the house of Lakshmi, she exclaims he has seen how is Lakshmi since she is coming because of only money, Virender orders her to shut up mentioning if Neelum had went to bring her as a mother but instead she has gone to buy her off so Lakshmi will never come, Virender informs that for Lakshmi her honour and self-respect is the most important thing, she has attained these from her father, he knows that she will never come, Virender wonders why did Neelum not consult him, Aayush explains it might be because she thought he would disagree, Virender exclaims Neelum is once again to inflict tremendous pain to Lakshmi today, he prays that his Lakshmi should be alright and he needs to be with her, Virender turns to leave but Aayush informs even Rishi needs him and so he cannot go, Virender apologizes for not being with Lakshmi, Malishka turns to leave when Aayush says she is always like this.

Lakshmi questions what is Chachi doing, Rano asks if she doesnot have a heart as they are in a lot of problem and need her to save his life, she asks her husband why is he not instructing Lakshmi, he replies that she is not understanding when Rano questions why did he not ask about the health of Rishi, questioning if he is alive or dead, Rano then goes to Neelum asking about the health of Rishi, she explains that she went to meet Rishi, she doesnot allow her husband to reveal the truth. Rano exclaims she might have said some wrong things but Neelum has never denied that Lakshmi is not their daughter in law, and what is wrong in this so she forces Lakshmi to go with Neelum while she will sent her belongings, Rano exclaims that after marriage a girl should live in the house of her in laws and not that of her parents, she should not start this ritual, Lakshmi goes to her uncle exclaiming she knows he has always thought of them as his own daughters and she never asked for anything so can she stay with him, her uncle replies that he took money from her father fifteen years ago to settle in Mumbai and even this house is from that money, she has entire right to stay in this house and if something causes pain in the life of the children then it is right to break it.

Neelum getting frustrated exclaims that the questions would not have been about her son’s life and she was not so desperate so did not have to come to her house, but she needs Lakshmi today but in the future Lakshmi would need her. Lakshmi replies she is even saying this and has come to buy her out, Neelum replies that everyone knows that there is a lot of power in money and not made any mistake, Money can buy everything, Lakshmi says she can then buy his health, Neelum replies she has come to take her back with the money. Lakshmi replies she can only be won with the righteous heart, Neelum questions when has she done anything wrong with her and was always really good with her, Lakshmi explains by hiding the truth about his affair and the problem in his kundali, Neelum questions she is also not that good since she is standing here, Neelum accepts she hid everything wrong with the kundali of Rishi, just to save his life and now that same son is her husband so what is she doing here, Lakshmi is just standing without doing anything. Neelum replies she thought she would come here and ask Lakshmi to come back not because of the money but because Lakshmi loves rishi a lot and can do anything for the sake of love. Lakshmi replies that when she found out about the affair of Lakshmi and Malishka, she was leaving the house and Neelum tried to stop her but she did not because she never felt anything was true and has now realized that Neelum was never speaking the truth, she is a two faced person. Lakshmi holding her hand apologizes to Neelum informing that he cannot do it anymore since she feels there is only pain in that house and everything hurts her a lot, she is holding her hand requests Neelum before running into the house, Karishma asks Neelum to leave since Rishi is in the hospital.

Lakshmi rushing into the room lies down on the bed, Shalu and her younger sister questions what has happened when Lakshmi assures, she is not going to cry anymore and when she starts crying, they both also have tears. Lakshmi explains that she thought only Rishi was wrong however she now has found out that every relation in that house was false, she has come to realize they never wanted her but only her Kundali and if it belonged to Neha, they would not have any problem. Lakshmi explains it was all a lie since she was never considered as the daughter in law of that family, they always tend to give her so much pain and she thinks that there cannot be anything else more painful, but that family always surprises her. Only thing more painful is death, Shalu stops her questioning what is she talking about since they have all seen a lot of deaths in their life, Lakshmi is still alive but if she had died then everything would have ended in a bit, she can still be strong, both Shalu and Bani exclaim that did she ever think what would happen to them if anything happened to her. she brings the portrait of their mother and father informing they have given her so much love that nothing else is needed in this world. Lakshmi recalling the memories wonders why their parents left them.

Neelum enters with Karishma in the hospital when Karishma tries to offer to talk with Lakshmi, but Neelum questions if she was not present there, did she not hear or listen what Lakshmi desires, Karishma replies it might be the trick to ask for more money when Neelum mentions they will wait for some time. Karishma takes her name when Neelum warns her to never take her name in front of her since she only needs to think about her son, she gets angry after hearing the name of Lakshmi.

Neelum is walking when Virender stands in front of her, Malishka asks where Lakshmi is. Neelum replies he was always wrong about Lakshmi, that she saved his life when she was his wife and even after he left her but is she shows him the truth, it is that Lakshmi doesnot love Rishi and refused to come for him, he tries to console her when she exclaims that she can wipe them off herself. Virender tries to explain when Neelum replies she married him since her father said he is mature but he was wrong since she went to his house and tried to convince her revealing the entire truth about the Markeshdosh but even then she did not come, Neelum replies that Mummi jee should listen and even Aayush since he fights for the right of Lakshmi, she was never a good daughter in law since she did not come to save Rishi.

Virender replies she did not come back Neelum went to buy her out, he asks which girl takes money to fulfil the role of a daughter in law and perform the duty of a wife, Neelum says he is even now taking the side of Lakshmi, he did not recognize her in so many years since she went to ease her problems since she needs to take care of her family so she will not have any problem and did not hide anything from her, Virender in anger informs and this time Neelum broke her entirely by making her believe that she doesnot have any need else then her Kundali and made her suspicion true that her in laws are not good people, hearing this Neelum is shocked.

Precap: Neelam tells Virender, our son loves Malishka. Malishka is his happiness. I will get Rishi married to Malishka. Rishi’s condition starts worsening. Neelam continues, once Rishi and Malishka get married, Rishi-Lakshmi’s relationship will be ended. Lakshmi won’t stay his wife and will separate from our son for forever. A nurse sees Rishi and runs outside saying his condition is worsening. Doctor checks Rishi and says, sorry, but I can’t give you false hopes now. A guy gets into Rano’s house in night while everyone is sleeping. He looks at Lakshmi. 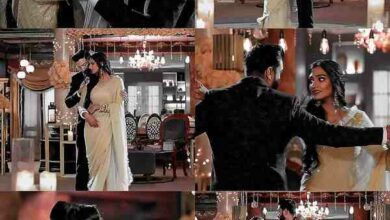 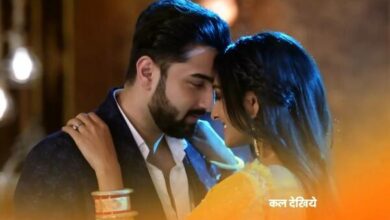 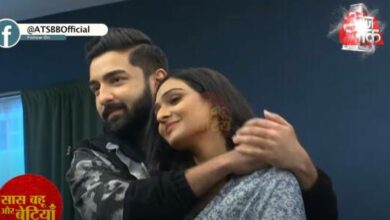 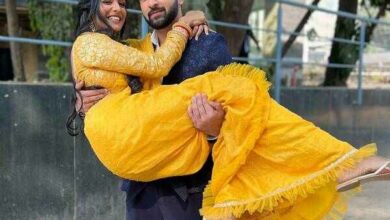