The Episode starts with some people standing on the road spotting Sonia coming to the road after shopping. They recognize her as Rishi’s sister and says they shall not leave her. They hold Sonia’s hand and humiliates her, and blames her for the food poisoning in Oberoi radiant. They snatch her bags. Lakshmi and Ayush are in the car. Lakshmi sees the people insulting Sonia and asks Ayush to stop the car. They run out of the car and go to rescue Sonia.

Sonia says she is Lakshmi, she has done everything, catch her. The people say catch both of them. Lakshmi says we haven’t done anything and will prove this. Ayush says we will call Police, you will have problem for your cheap behavior. Lakshmi promises the angry people that they will expose the real culprits soon. The people tell that they don’t want anything, throws Sonia’s bags and goes. Lakshmi asks Sonia if she is fine. Sonia asks her not to touch her. She sits in the car and leaves. Ayush and Lakshmi are standing on the road. Lakshmi is about to pick Sonia’s shopping bags, but Ayush says Sonia will not wear it, leave it.

Neha promotes the movie Goodbye and tells Rano. They are in the auto and going somewhere. Neha says it is releasing on 7th October. Rano says we will go and watch the movie, first day first show. She says we will not take Shalu and Bani along with us. Sonia reaches home. Neelam asks what happened Sonia. Sonia sits on the couch. Karishma asks her what happened? Sonia says I will do the same thing with Lakshmi.

Neelam asks if this is done by Lakshmi. Sonia says it all happened due to her. Sonia recalls the lady slapping her, takes water jug. Ayush tells Sonia that it is not Bhabhi’s mistake. Karishma says don’t interfere between them. She thinks come on, Sonia…make Lakshmi see stars in the day time. Sonia is about to throw water jug on Lakshmi, when Virender comes there and stops Sonia. He asks what happened to her.

Sonia tells that she was slapped by a lady and they humiliated her. Ayush shouts. Sonia says you have lost your respect and dignity due to her. Sonia goes. Ayush tells that people were blaming Sonia. Karishma says due to Lakshmi, business and family members were getting affected. Virender says everything will be fine. Neelam says when everything will be fine, when everything gets destroyed and this all happens due to Lakshmi.

She says you are inauspicious for us and this is proving again and again and you don’t want to believe this. She says the family is suffering because of Lakshmi, if I could then I would have thrown you out. Lakshmi apologizes to Virender and says if I was careful and smarter then this wouldn’t have happened. Virender says someone does bad with us, when we let others do wrong with us.

Ayush asks her not to be guilty, and says you went to jail and now Rishi is in jail. Virender says my second tiger is with you. He says Karishma and Neelam will take care of Sonia and asks Lakshmi to take care of herself. lakshmi says Sonia is very much hurt, how to apologize to her. Ayush says Sonia is volcano now, and will insult you. He asks her to give her some time and says once the culprit name comes, everything will be fine.

Malishka says why did you do this Rishi. She says you used to love me so much and now you have changed for that behenji Lakshmi. She says I shouldn’t have got them married, else this shouldn’t have happened which she has done.

Lakshmi is sleeping on floor and thinking about bringing Rishi back. Saathiya Re plays…..Malishka looks at Rishi and her frame and says you don’t love Lakshmi, but loves me. She says I will save you anyhow. She says we will celebrate Dussehra together, and I will not let anyone come between us, and I will make you freed from Lakshmi’s clutches.

Lakshmi is sleeping and imagines Rishi making her waking up holding the peacock feather. She says you have returned and hugs him. She says she is happy. He says he is also very happy and felt incomplete in jail. He asks if she felt the same. Lakshmi asks how did you come here? Rishi says Inspector dropped me here, as I told him that I am missing my wife and we both are innocent, so he dropped me here.

He says nice na. Lakshmi says Inspector is good. Rishi says I am talking about myself. Lakshmi says you are also very nice. Rishi says he wanted to celebrate Dussehra with her and tells that this year Dussehra will be the most memorable one. She asks what he is going to do? He says I can’t say, but I want to show a small sample. He is about to kiss her. It turns out to be Lakshmi’s dream. She smiles and checks the time. She thinks it is 8:30 am, and asks God to support her, today is her big test.

Precap: Rishi tells the prisoners that he is sitting here, but relieved that Lakshmi is with him. One of the prisoners says that this is love. Rishi says love? Dadi asks what is the proof? Lakshmi says CTV footage. Ayush informs Shalu about the CCTV footage. Shalu happily hugs him. Balwinder asks Malishka if they got the footage and asks her to come to his house, and says they both shall hang. Employee comes to give the CCTVfootage pendrive. Malishka thinks she won’t be saved and tries to steal the pendrive, when Lakshmi comes and holds her hand. She takes the pendrive. 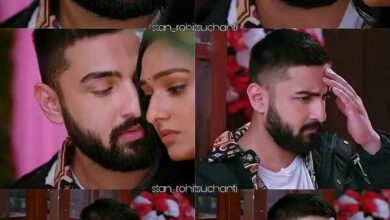 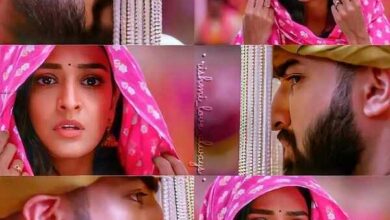 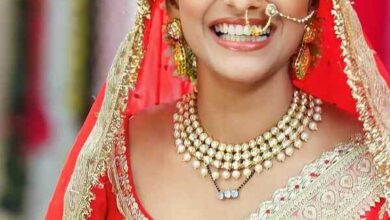 Bhagya Lakshmi : Rishi All Set to Marry Lakshmi BUT…. !