The Episode starts with Mukesh telling in court that whatever they have made in kitchen was according to Lakshmi. She was telling them what to do. Mr. Amod tells that the Chef revealed all. Mr. Basu asks Mukesh if he had followed all instructions of Lakshmi. Mukesh says yes. Mr. Basu asks whom Lakshmi told to add poison. Mukesh says kitchen is big, I don’t know who has told whom.

Mr. Basu asks where did you go urgently. Mukesh says he went for a reason after informing and taking permission from Malishka. He says when he watched the news and after talking to another Chef, he came back. Mr. Amod tells that now Mukesh’s statement is also taken and tells that the answer is that Lakshmi had made the food and the people got critical. Rishi is about to go out of court. Neelam stops him and asks if he can’t bear Lakshmi’s truth, or not feeling good that she is proven guilty and asks if he don’t want to see her getting punished. Rishi goes out.

Mr. Amod says Defense lawyer has no proof that she is innocent. Mr. Basu says he can’t prove that she is guilty either, he don’t have proof that she has mixed poison in the food. Mr. Amod says she has confessed. Mr. Basu says she has confessed to made food. Mukesh comes and sits behind Malishka and her father. Abhay recalls coming to meet Mukesh at some place. Malishka says Mukesh was Lakshmi bhakt last time. Abhay says money has the power and I have promised to give him money.

Mukesh comes there. Malishka asks how is your mother? Mukesh says nothing happened to her. Abhay says my daughter is telling you, what you have to tell in court. He gives him money. Malishka asks him to tell in court that he went to village as his mother was unwell after taking permission from her. Mukesh says a guy had come to the kitchen. Abhay threatens him that who will believe you, as you have runaway and you will be punished. Malishka says if you put blame on Lakshmi then nothing will happen to you. Mukesh nods his head. Fb ends. Abhay smiles.

Bani asks Shalu if Lakshmi will not be freed. Balwinder says if you have married me, then we would have become parents. She says now nobody can save her. Malishka thinks nobody can save her. Rishi tells Ayush that how to save Lakshmi. Ayush says there must be some way out. Rishi says we have tried everything. Malishka hears them and thinks there is no way now.

She says I am sorry to give you pain, but it will not there for much time. She says once she goes, I will give you so much love that you will forget her, thinks let her go to jail. Rishi says Lakshmi will not go to jail, I have promised her that I will get her freed by hook or by crook. He recalls promising Lakshmi. Ayush thinks your love is the way, you will not let anything happen to Lakshmi.

Malishka says what the hell, how Rishi will save Lakshmi and says all the ways are blocked. She says I will not let him save Lakshmi this time, I won’t let this happen. Mr. Amod tells that everything is clear with Mukesh’s statement that Lakshmi is guilty and shall be punished.

Mr. Basu says I told it clearly that no witness or proof came in court that she had mixed poison. Virender and Neelam see Dadi feeling unwell and asks her to go home. Dadi agrees and asks them to bring Lakshmi home. Neelam asks Ahana to make Dadi sit in the car and asks driver to take her home. Ahana takes Dadi out.

Mr. Amod says if someone else have added poison then Lakshmi would have caught her. He asks the Judge to give his verdict, saying Lakshmi has added poison herself. Judge asks Mr. Basu if he wants to say something. Mr. Basu says nothing. Kiran tells Malishka that Lakshmi’s lawyer has failed and now the Judge is going to punish Lakshmi. Malishka tells Kiran that Rishi wants to get her out at any cost.

Kiran says case is almost closed, he can’t do anything now. Lakshmi thinks Rishi has promised me, and will fulfill his promise. Uday tells the reporter that just as the Judge gives his verdict, Neelam Oberoi’s pride will come down. The Judge is about to give verdict when Rishi comes back and asks Judge to stop. Judge asks who are you? Rishi says I am Lakshmi Oberoi’s husband.

Judge asks him to come to witness box and say. Rishi comes to Lakshmi and holds her hand. Balwinder says hold her hand, but this will be the last time. Lakshmi gets teary eyes and the tears roll down from her eyes. He wipes her tears. Mr. Amod asks Rishi to come. Rishi tells Lakshmi that he has promised her and will take her home. Rishi comes to the witness box. Mr. Amod asks Rishi, what he wants to say.

Rishi says I want to say the truth. Mr. Amod says Lakshmi has done the crime. Rishi says she has not done anything and says Judge will decide if Lakshmi is criminal or not. He says time has come, that I will bring out the truth. He says when Dad and I start this hotel, we had much profit at the start, but our expensive clients were less and discount clients were more.

He says we have closed our 2 hotels and now we have 2 hotels. He tells that they have to do more cost cutting and even had to sell the utensils. Mr. Amod says what is he saying and says he is wasting time. Mr. Basu asks what is the way to talk, this is the question of someone’s life. Malishka says if Rishi has gone mad. Neelam hears her and says Rishi is trying to get Lakshmi punished, and trying to save our hotel.

Malishka thinks it is not like that. She thinks why did he come inbetween. Ahana is going back to court and thinks Dadi went home, but until Lakshmi bhabhi comes, she can’t be at peace. She sees a goon behind her and gets worried. Just then the Inspector is taking the terrorist from there. The terrorist looks at Ahana and smiles. Ahana gets scared. Inspector asks Ahana to go inside. Ahana goes inside and thinks the terrorist was dangerous and was smiling in court. She prays that he don’t do anything here.

Precap: The terrorist comes to the court where Lakshmi’s trial is taking place. He shoots in air. Everyone panic and try to run. Neelam gets pushed by someone and falls infront of the terrorist. Virender shouts Neelam. She is at the gun point of the terrorist. Rishi gets worried.

Lakshmi comes infront of Neelam to shield her. The other terrorist asks Lakshmi if she is her mother, and asks her to make this low woman understand. Lakshmi gets up and asks the terrorist to mind his tongue. Someone takes the video. The terrorist holds Lakshmi’s hand. 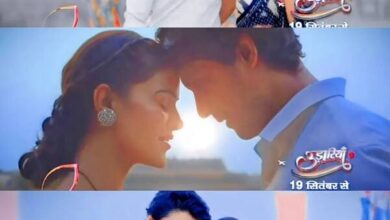 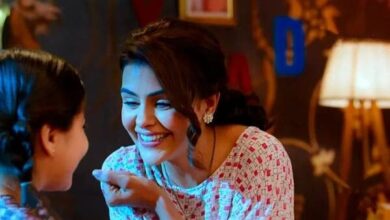 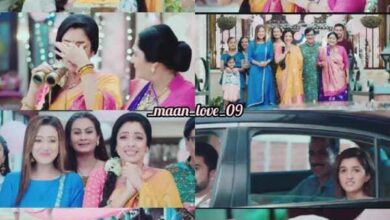