Sai worried for Virat calls him, but he is not reachable. She watches a nightmare of Virat being shot in his head and wakes up calling him. Ashwini rushes to her and comforts her. Virat searches Shruti’s location with Sada’s given map. Shruti’s aides inform he is the one who shot Sada and try to shoot him. She stops them, walks in front of Virat, and points gun at him for killing Sada.

Her team joins her pointing guns at Virat. She vents out her anger for killing Sada and asks about Sada’s body. Police takes Sada’s body to police station. DIG asks Surve about Virat. Surve says Virat dropped down no the way and his phone is not reachable. DIG says he wants to give credit of mission’s success to Virat, Virat must be in deep sorrow after losing his friend. He permits Surve to take Sada’s dead body for postmortem. Surve finds Sada’s dead body missing.

Sai describes her nightmare to Ashwini and prays god that she will fast for 3 days if Virat returns home safe. Back in jungle, Virat informs Shruti that Sada’s body is taken for postmortem. Shruti cries. Aides inform that Virat put his gun down at first but then shot Sada later. Virat says Sada told her something before he died and he wants to discuss it only with Shruti. Aides ask him to speak in front of them.

Virat keeps his gun down. Shruti sends her aides. Virat says Sada is his college’s best friend who wanted to change the society, but he didn’t know Sada would take this path; he informed about his pregnant wife and requested him to help her get their baby in the world. Shruti says if he cooked up this story just now. Virat says he wanted her and Sahas to shift in a safe place. She asks how does he know about their baby name. Virat says Sada told him and requests her to make a decision by evening when he will return unarmed, she can shoot him if she doubts him a bit. Shruti stands crying. He leaves.

Sai cries and prays god to protect Virat. Bhavani says she is a policeman’s daughter and IPS officer’s wife, so she cannot get weak and shed tears. Sai says shedding tears is not a sign of weakness, its a wife’s way to show concern for her husband and Bhavani cannot stop her. Ashwini thinks once Virat returns, Sai will accept him as husband.

Precap: Sai calls Virat’s team who informs that Virat is missing. She prays for his safe return. Virat takes Shruti to hospital and introduces themselves as Mr and Mrs Chavan. 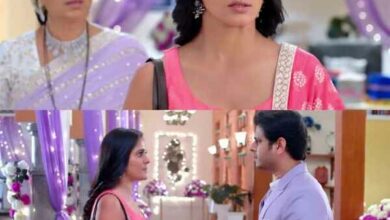