Virat asks Shruti not to blindly trust anyone in hotel. Shruti says she trusted and accompanied him here. He thanks her and says he will bring her bags from his car. She apologizes for troubling him. He says she is disturbing him with her questions though. Samrat tries to call Virat’s phone number. Pakhi asks if the situation is really serious. He asks if she realized it now, she was criticizing and trying to prove him wrong. She continues criticizing Sai and repeats that even after Virat’s warning, she called DIG directly last time and stopped his transfer irking him. He says she is still criticizing Sai. She says they way Sai and Virat got closer, Virat will call Sai directly and not like her husband who left her to make new relationships and returned after 1 year. He asks does she want him to repeat the reason behind it. She says last time Virat and Sai found him and brought him back home, what if he doesn’t return next time.

Sai continues worrying for Virat and sleeps on couch. Ashwini feels sad seeing her condition. Sai senses Virat entering and looks at door. Virat enters. Sai happily runs and hugs him. Ashwini happily prays god to protect her children’s happiness, thinks she knew Sai would welcome Virat with extended hands, and prays god to keep them together forever as husband and wife. Sai asks why he didn’t call her. Bhavani gets happy seeing him and blesses him. She then tells Sai that her husband returned and she should feel happy. Other family members join. Samrat hugs Virat and asks if his mission was successful. Virat says yes and thinks his mission was successful, but he failed in his friendship, remembering shooting Sada. Sai notices mauli/protective thread in his hand missing and questions him. He shows mauli and says her mauli saved his life, remembering the incident. Sai thanks god for sending Virat home safe.

Devi asks Virat to never go away from Sai and says she made a mistake of breaking Sai’s mangalsutra by mistake. Sai says let us forget whatever happened and be happy. Ashwini says Sai is jumping with happiness, but was very sad in his absence and kept 3 day fast for him. Mohit walks in next and says he will bring Virat’s bags from his car. Virats his bags are still with his team as they reached early and he had to stay back for some work. Sai says she knows why he is late. Virat gets tensed thinking if she found out about Shruti. Sai says she had called DIG sir who informed that whole team came and he is missing, so she was tensed. Samrat says even they all were worried. Virat says its not good to repeatedly call and disturb his seniors and team. She says sorry, she was worried for him. He says his phone battery is dead and he needs to charge it as he may be getting calls. She senses his dilemma and asks if he is fine, why he looks so silent. He says she is a police officer’s daughter and now his wife, she knows the risks involved in his house, so she shouldn’t call his seniors or team and trouble them. Sai asks how will she find out if he is fine. He says she should wait for his call.

Pakhi criticizes Sai again and says Sai troubled Virat’s team and even them by giving them half information. Ashwini tells Virat that he should have seen Sai’s condition, she was in really worried for him. Samrat asks Virat when DIG considers Sai as his daughter, why can’t Sai call him. Virat says she can, but not during mission; even he wouldn’t pick her call during mission. Ashwini says he can’t say that. Sai says let it go. Bhavani scolds Ashwini for supporting Sai instead of her son and then Samrat for supporting Sai instead of his brother and says they should be worried for Virat as he must have a gone through a lot during mission. Omkar says they are proud of him. Pulkit asks why he looks so dull even after mission’s success. Samrat asks what happened. Sai says modak is tired and will be normal after he rests a bit. Virat nods yes.

Virat walks into his room. Sai says its amazing that as soon as she returned to his room with her bags, he left for mission and she was shocked. He says he saw it on her face. She says she missed him as he ordered her and asks if he missed her. He says he missed her a lot. She excitedly asks if he had her prepared fried modak. Seh says they were tasty. She apologizes for calling his police station to inquire about him and says she is habituated to call Aaba during similar situation, but forgot that was Gadchiroli and this is Nagpur. He says there is no need to worry. She says she was and asks him not to bother much and rest. He thinks he is happy seeing her concern for him, but he cannot share is problems with her and hence its better if she stays away from his work and problems. She asks if they are still best friends as when bestfriends meet after a long time, they will have a lot to discuss, is he hiding something from her. He gets nervous. She sees sindhoor on his shirt and questions him. He gets more tensed.

Precap: Shruti calls Virat repeatedly.
Sai notices it and informs Virat. Virat hurriedly rushes out to call her. Sai asks who is Shruti and why is she calling him repeatedly at night. 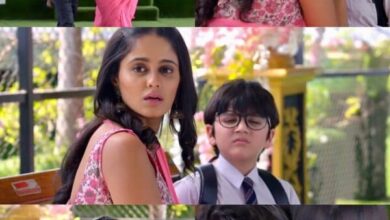 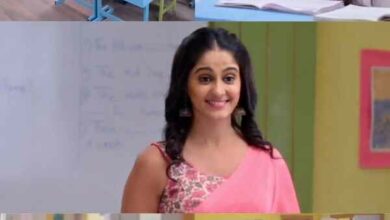 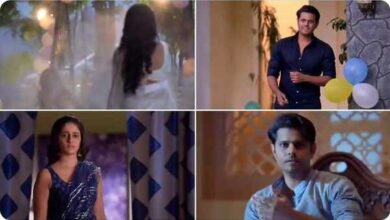