Shivani admires Atharva and Imlie’s jodi and says their jodi looks like Lord Shiv and Devi Parvati’s jodi, but they should remember whether god’s of human jodi, it stays bonded with only love and without love, any relationship is fake. Anu asks Chini why Atharva’s aunt is commenting like this. Chini says something is wrong as Atharv and Rudra were fighting a few minutes ago and look so calm.

She notices Atharva staring at her and thinks why he is giving a broken hearted lover’s look at her. Rudra notices them. After sometime, Atharva looks at his engagement ring and thinks why Imlie got engaged to him even after reading his message, he loves Chini. He imainges Chini who asks if he really loves her. He says he wants to marry her and even messaged Imlie about it. Chini asks him to propose her in style.

Back home, Imlie recites a shayari/poem looking at her engagement ring. She imagines Atharva who expresses the meaning of love according to him and dances with her. Bairi Piya.. song plays in the background. Imlie asks him if he is happy. Rupali enters, and Imlie realizes it was her imagination. Rupali taunts if she is imagining her fiancee. On the other side, Athrava dances with Chini on Tujme Khoya Rahoon Main.. song. Atharva describes how much he loves his hookline and going against his family would like to marry her. He tries to fix engagement in her finger when Chini disappears and he realizes it was his imagination. He thinks Chini is his reality and should get out of his dreams and confess his feelings to Chini.

Sundar, Arpital, and Chini check engagement gifts. Sundar tells Arpita that he is surprised seeing Narmada stopping Anu from badmouthing about Imlie. Narmada says there is no need to feel surprised as she is happy that Imlie is getting married and getting out of her house. Imlie with Rupali walks in. Chini tells Imlie that she got lots of lovely and precious gifts and since Imlie can’t take care of all the gifts, she will keep some for herself.

Rupali warns her never to touch Imlie’s shagun from her in-laws and shows Rudra and Shivani’s gifts to her. Imlie recalls Shivani’s words and asks Rupali if she noticed that Atharva’s aunt didn’t seem happy. Rupali mocks her that she is worried about her in-laws even before marriage. Arpita says everyone’s nature is different.

Akash and Keya discus that Rudra doesn’t know that they are behind Atharva and Imlie’s engamgnet and plan to use Imlie’s dumbness in their favor and grab family wealth. Devika tells Rudra that she is happy that Atharva and Imlie’s engagement finished peacefully. Rudra says he is confused how Rudra agreed for he engagment when he wasn’t ready a few minutes ago.

Devika says maybe Imlie’s goodness impressed him. Rudra says he is confused seeing the way Atharva looking at Chini; he shouldn’t speak ill about any girl, but he doesn’t like Imlie. He praises Imlie as pure gold and says Chini is just a gold polish and may interfere between Atharva and Imlie. Devika says god will protect Atharva from getting influenced by Cini. Rudra says he can’t live Atharva and Imlie’s relationship on fate and needs to act.

She asks what is he going to do. Atharva messages Chini and calls her outside. Chini tries to leave. Imlie asks where is she going. Chini says to have water. She walks out and asks Atharv why he wants to ruin her sleep. He says he wants to clear something. She says she knows he doesn’t like Imlie and should himself think how to inform about it to everyone, she can’t ruin her sleep because of him. He holds her hand. 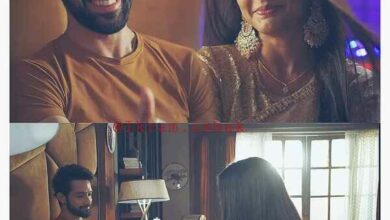