Narmada asks Rudra what can she give him when he has everything by god’s grace. Rudra says he wants her house’s Laxmi, her daughter. Anu thinks he is seeking alliance for Cheeni and introducing herself asks Rudra if he brought alliance for Cheeni. Arpita explains that they have 2 daughters, elder one is Cheeni and younger one is Imlie. Rudra says he is talking about Imlie.

Anu stands frowning. Narmada accepts alliance instantly. Arpita takes her aside and says they should seek Imlie’s opinion first. Narmada says she just wants to get rid off inauspicious Imlie as soon as possible. Rudra overhears them and says let the kids decide as its their future. Sundar offers him sweets. Arpita hears car honk and says looks like Imlie and Cheeni came.

Anu rushes out and informs Cheeni that Imlie got an alliance. Cheeni laughs saying Imlie was perfect daughter and now would be perfect bahu. Anu says Imlie got alliance from the city’s richest industrialist family. Cheeni gets jealous that she got only poor DJs in her fate, but Imlie’s fate is too good that got alliance from rich family. Anu suggests her to snatch it from Imlie if she can’t get it. Imlie notices a car and tells Cheeni that someone has come. Cheeni nods yes. Imlie walks towards house when Cheeni pushes her and makes her fall into a dirt.

Family walks out and notices Imlie fallen into dirt. Cheeni laughs that Imlie loves soil. Rudra recalls Cheeni’s misbehavior earlier and says soil is ther mother and one should feel proud touching their mother’s feet. He holds Imlie’s hand and helps her get up. Imlie thanks him and apologizes for not touching his feet. Rudra says he already told her that daughters don’t touch feet. Imlie cleans her face and identifies him and says even she told that daughter are very stubborn. She touches his feet and welcomes him in. Jealous Anu tells Cheeni that her Chee baby is very talented, but Rudra chose illiterate Imlie for his son.

Imlie changes her dress and asks Arpita and Rupali why they are so keen on her dress and makeup today. They both insist her to change her dress again as they want her to look most beautiful today. Imlie asks what is happening. Narmada enters and says her alliance is being fixed, she doesn’t know what Rudra saw in her. She warns her to dare not come in front of Rudra with her inauspicious makeup-less face and force him to chance decision.

Arpita enters and stops Narmada. Narmada says she wants Imlie to marry and leave her house as soon as possible. Cheeni enters, and Imlie hugs her and says her alliance is fixed. cheeni asks her not to take stress and tell Rudra uncle that she doesn’t want to marry as there is no shortage of boys in the city, at least not for her. Rupali scolds Cheeni and asks Imlie to listen to Rudra once at least.

Keya asks Athrav about his concert. Atharv says people are mad about his concert and line up. Cousin says he found a girl there. Keya says he may meet many girls during conert, she will show him a girl who will be permanent in his life, trying to show her sister’s pic. He says he already found a girl and knows her well without knowing her, thinking about Cheeni. He shows Imlie’s poem in news paper and says this is the girl, thinks he wants to know if his hookline Cheeni is his dream girl. Keya thinks he will run away from haanji uncleji type girl his father is fixing his alliance with and will soon plead her to introduce him to her sister.

Imlie sits nervously while Rudra chats with her. Cheeni drops Imlie’s documents in front of Rudra and acts as doing it by mistake. She says Cheeni studied in Hindi medium government school and doesn’t know a word of English, she grew up in a village for 10 years and then joined a Hindi school here instead of joining an English convent with her. Imlie thinks its good that uncle ji found out that she studied in a Hindi medium.

Rudra acts as angry on Narmada for hiding the truth and then says he is happy that Imlie can speak in pure Hindi while most new generation kids don’t know to pronounce their holy scripture names properly, he wants Imlie’s hand for his son. Sundar and Arpita feel happy hearing that while Chini and Anu stand frowning.

Precap: Imlie writes a poem that she is going to start a new chapter of her life with a special person whose thinking matches hers, Atharv. She hears Atharv refusing to marry her. Cheeni looks happy hearing that. 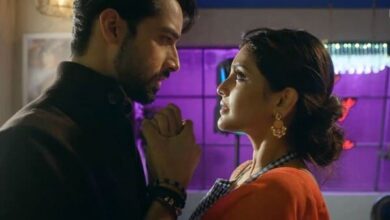