Aparna finds her lit Imlie’s named lamp missing and questions Sundar. Malini says she gave it to Imlie as Imlie left Aditya and since she is worried for Adity, she is helping him get rid off Imlie’s memories. Adi walks in and says the differences will not clear now, she did right by removing the lamp, he will not let Imlie inside even if she wants to. Door bell rings. Sundar opens door.

Aparna rejoices seeing Imlie with reporter team. Adi asks what is she doing here. Anu says she called her. Imlie says she is reporter Imlie from Bhaskar Times. Adi says she cannot enter his house. Anu says she paid money to cover Adi and Malini’s wedding news. Aparna says whoever have called her, family members will decide who will visit them, and she welcomes Imlie in. Malini asks Anu if she is her enemy that she called Imlie here. Anu says she wanted to see Imlie’s discomfort seeing her and Adi’s wedding. Malini says if Imlie stays back here more, she will reveal that she had sent a love letter and not divorce papers. Anu thinks she made a blunder.

Aparna assures Rupali that Aditya will not marry Malini and prays god. Pankaj asks her not to have false hope. Aparna says with Imlie’s presence, Adi will melt down and will not marry Malini. Anu apologizes Malini and says she will set things right. Malini says she will handle it herself. Imlie asks her team to set up their cameras. Her team member asks where to take bites. Imlie looks at Adi’s room. Malini walks to her and says its bride and groom’s room and she cannot enter there.

Imlie warns her not to waste her time as she has a lot of work to finish. Malini taunts her back that she cannot ruin her wedding this time and gives her wedding sweets. Imlie says its wedding laddu and people repent whether they have it or not, and tries to force feed her. Malini stops her. Imlie continues her moral gyaan and warns her to stay away from her or else she will burn in her fire. Malini thinks she will concentrate on herself and has taught something else for Imlie.

Adi notices Imlie and remembers Aryan announcing his wedding with her. A reporter requests a selfie with Adi. Adi says he is just an obituary reporter who writes obituary news, real star reporter is Imlie and she should take her selfie and autograph. Imlie slips. Aryan rushes in and holds her. T family stand shocked seeing that while Adi stands jealous. Aryan offers water to Imlie.

Imlie asks him why did he come here. He says if he had not come here, she would have been entangled in her emotions. She says she just slipped. He says he wants her to be strong and not give up, etc. She says she just asked him why did he come here and he is just lecturing her. He remembers Malini calling him and citing threat from her husband’s ex-wife Imlie of grabbing back her husband asking him to come there and supervise his team or else as a client she will stop his payment. He threatens her back that if his payment is delayed, he will sue Anu and send her to jail; her mother insisted to send Imlie to cover the news, so she should speak to her. He thinks Adi dug a big pit for himself by writing an allegation article on Imlie.

Anu asks Malini why she told Aryan will not come. Malini says Aryan is her main pawn today who will help her complete her wedding with Adi. Adi comments at Aryan that he is for the first time seeing a CEO helping his team. He says he will never see a CEO like him again. Malini insists Adi to dance with her for news coverage. He dances with her while reporters click their pics.

Aryan notices Imlie crying seeing that, takes her aside, and warns her to act as a reporter and think its a client’s wedding and not her ex-husband’s. Imlie wipes her tears, walks to Malini, and asks about today’s function. Malini asks Aparna if they should perform Maata’s jagrata like last time. Aparna says nothing is same like last time, but since its mata’s jagrata, she can organize it. Malini taunts Imlie that she has permission to do anything. Drama continues.

Precap: Imlie mocks Anu in lieu of taking her interview. She gets tensed when Aryan walks to her. 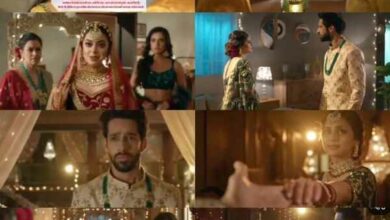 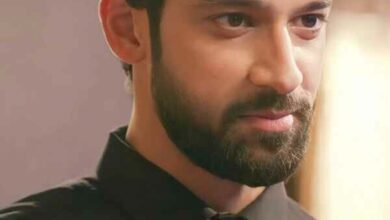 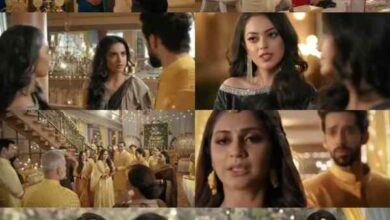