Tripathi family is busy decorating home temple when Malini calls Aditya. Everyone rush to her room and see lots of knives. Aparna says getting utensils was Imlie’s task. Imlie thinks Malini is trying to defame her purposefully. Malini says shopkeeper by mistake delivered wrong order. Pankaj asks her to relax while they clear knives from her room. Malini rests on her bed and gets a cut on her hand. Adi checks and finds knife on her bed. Malini says its good knife cut her hand and not her stomach. Adi thinks who must have done this heinous act. After sometime, Radha selects Diwali gift hampers for Pallavi’s mother, Meethi, and Anu. Malini shows her baby’s bought gold bangles. Aparna says Adi will fix it in his baby’s hands. Pankaj gives Adi moral gyaan on fatherhood with a long explanation.

T family then performs Dantheras pooja. Adi prays god that he wants to become a good husband, son, brother, and a friend to become a good father. Imlie prays to send peace in her family and when her baby/Malini’s baby arrives in the world, he should be free of any problems. Dulari sees baby’s bangles burning in lamp. Harish says they ordered gold, but this is not gold. Radha asks where did bangles go then. Anu receives T family’s gift hampers for her and Meethi. She removes baby bangles from box and remembers Malini informing her that she hid bangles in gift hamper and she should keep it at the right place. Meethi performs karva chauth rituals with Satyakam in her house and passes by when Anu stops her and says she got a charity from Tripathis. Meethi asks why is she calling diwali gift as charity. Anu says gifting is done among equal people and not servants. Meethi taunts that even she got a gift from her daughter’s in-laws. Anu hears sound from Meethi’s room and asks who is there. Meethi nervously says she kept window open and walks away. Anu thinks rat itself has entered a trap and now servant junior has to leave T house because of it. Meethi returns to her room and asks Satyakam to maintain silence. Satyakam asks to show gifts she got from daughter’s house. She opens box and finds baby bangles in it.

Back at T house, Nishant asks who must have stolen bangles. Dulari panics and says she didn’t. Harish says they are not doubting her and should find out if jeweler made a mistake. Whole T family gets Meethi’s photo holding bangles with Satyakam. Radha asks what is Satyakam doing there. Malini asks Imlie if she sent bangles to her mother. Imlie says she didn’t. Malini starts her emotional drama and says she didn’t expect Imlie to play with her baby’s emotions, she sacrificed her right for Imlie, but didn’t expect Imlie to stoop so low. Adi says he can understand Malini’s feelings, but Imlie will never give anything to anyone uninformed. Imlie says she really doesn’t how bangles went to her mother. Pankaj says they trust her. Malini says more than losing bangles, she is worried about Satyakam’s return and reminding Satyakam shooting Adi fears for her baby. Imlie blames Malini that Sayakam shot Adi because of her. Malini says she never called Satyakam and doesn’t even know him well, she even doesn’t know what happened that night, but Imlie is continuously blaming her. Imlie continues shouting. Aparna stops them both. Harish says there is not need to fight at home, he will bring baby’s bangles. Malini thinks she needed this drama to separate Adi and Imlie.

Meethi tells Satyakam that bangles must have come here by mistake. Satyakam says he can be a rebel by opposing law and run away from police, but he cannot run away from his family and wants to repent for his sins by meeting Adi and apologizing him. Imlie calls C house and asks Anu to let her speak to Meethi. Anu denies and disconnects call. Meethi agrees to take Satyakam to Adi, but finds room door locked and thinks Anu must have done this to trap Imlie as she found out Satyakam is here. At T house, Adi asks Imlie if she knows Satyakam is in Delhi. She says she didn’t . Adi says they should inform police about his location and get him arrested. Imlie insists to get Malini also arrested as she provoked Satyakam to shoot Adi, dadda didn’t want her life to be like her amma’s. Adi says Dev betrayed her amma, but he never betrayed her and Satyakam knew about it. She says he is wrong. He asks if Satyakam can shoot anyone if someone provokes him, what if Satyakam harms Malini and her baby if someone provokes him again. She says dadda will never do that and continues blaming Malini instead. Adi says he will trust her and will not call police, he also is sure that Malini cannot snatch him as he has trust on himself. Imlie continues that the bitterness between them is because of Malini, but he will never believe her.

Precap: Imlie says Satyakam and Malini are in same house. Adi says they are not as he checked whole house and he cannot trust her when its a question of Satyakam as she didn’t react when Satyakam shot him. Imlie blames that Malini has instead kidnapped Satyakam. 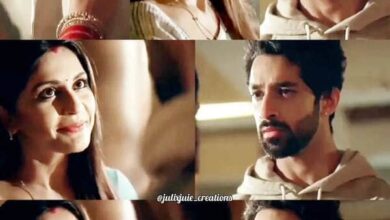