Imlie brings Madhav home with his whole body wrapped in bandages except eyes. Aryan stops her and says she cannot bring Madhav in this house. Imlie says where else she should take him then, whoever attacked Madhav severely injured him and can attack him again, he is able to give statement to police now, she can’t take a risk and will keep him until he gets well.

Narmada backs Imlie and asks Aryan to beef up the security around the house. Arpita says she will help Imlie shift Madhav in a guest room. Imlie thinks Nila and Gudiya are not here and Jyoti is here, whoever is afraid of Madhav will try to attack him, Madhav is in hospital and she brought Sundar wrapped in bandages to catch the culprit.

Arpita asks Imlie about Sundar and calls him. His phone rings nearby. Imlie says Sundar is not here and had left his mobile, so she kept it with her. Arpita says he is forgetting things these days and hence she is worried about him. Aryan tells Imlie that he never spares his enemies, but she brought Madhav home. Imlie asks if this house doesn’t belong to her.

She says she has right on his everything. She asks him to hate her then for bringing her friend home. He asks her what about he thinks and what he wants, Madhav must have been attacked as he must have done same with others what he did with her. Imlie says Madhav can be innocent. He says whatever he is doing is because of her as he loves her, but she didn’t care about his feelings and brought his enemy in his house. Imlie feels disheartend.

Imlie converses with Sundar who says he is helping her not only for her but also Arpita, Narmada, and Aryan as the family belongs to even him. Aryan notices them and thinks Imlie doesn’t doubt Imlie a bit, if Madhav is really innocent. She recalls Jyoti giving him evidence against Madhav and thinks he cannot think like Imlie, he is sure Madhav is the culprit. Sundar asks Imlie to feed him something as he is feeling hungry. She walks out of room and notices Aryan standing there. She ignores him and walks away.

Arpita asks Aryan if he saw Sundar. He says no. She notices him tensed and asks reason. He says he fears that he failed to protect his family, especially Imlie, and fears losing Imlie like losing Arvind. Arpita says he is not responsible for what happened with Arvind and asks him not to ruin his happiness and stop living freely because of his anger.

Jyoti prepares food for Madhav and mixes poison in it. Arpita notices her and asks about Sundar. Jyoti says he must be somewhere around. Arpita asks if she prepared food. Jyoti says its for Madhav and walks towards Madhav’s room. Imlie walks to Arpita and tells him that Sundar called her and informed that he is busy in an interview. Arpita informs her about Jyoti taking food for Madhav.

Jyoti walks towards Madhav’s room and seeing Sundar sleeping peacefully realizes he cannot be Madhav and Imlie has laid a trap to catch her. Imlie walks to her and asks if she mixed poison in it. Jyoti eats food to prove her wrong.

Imlie thinks she cannot be the culprit as she doesn’t have any weapon and ate the whole food. Jyoti rushes to her room with poison affecting her. Harry mocks her that many lives will be saved if she dies. She threatens him that even Nargis will die if she dies and orders him to take her to the hospital immediately.

Sundar frees himself from the bandages with Imlie’s help. Imlie gets a call from hospital that Madhav has regained consciousness. She asks him not to inform about it to anyone citing Madhav’s safety and decides to visit Madhav. Nila calls Kairi. Sundar asks Imlie not to worry she will visit Madhav. Imlie disguised as Kairi walks to Nila and starts her jokergiri. Nila scolds her for being lazy and asks her to press her feet. Imlie thinks she needs to visit Madhav at any cost. 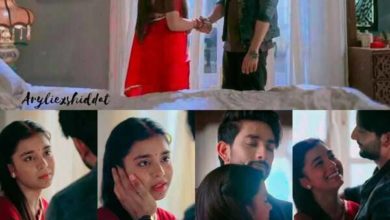