Sanjana is searching the drawer, she explains that the belongings in the pack are not here so asks Rena if she is sure she placed it there, Rena advises her to go and ask the landlord, Sanjana is with the landlord who explains that a women came who said that she is her friend, he however doesnot know her name, Sanjana explains he would remember her face, she shows the face of Sonakshi, the landlord mentions that this was the doing of Sonakshi, she would not spare her because she has violated her private space.

In the house Radha is requesting Shuv to eat the noodles as these are his favorite, even the cook requests him but Shuv refuses saying that he only desires his father, Aayush also comes with Soha, she also asks for Dev explaining that she wants him to sign her diary, and is missing him, she asks if there has been a fight between their parents but Radha explain that it is nothing of the sort, Soha decides to call Dev when Aayush exclaims she can but then none of them would get the surprise, he explains that Dev said that until he comes back from his important work, they all must behave nice and not tease anyone, Shuv exclaims he will eat the food and also not tease anyone, Soha also leaves assuring she will finish her work, Aayush starts feeding Shuv, seeing which Radha gets tears in her eyes.

Sonakshi is in her office when Dev comes with a jacket, she asks what is he wearing when she removes the jacket, Sonakshi takes the sun glasses mimicking Dev, he accepts it his name but not like she is saying, Sonakshi explains it is really weird, Dev replies that he came after hiding from the reporters and Sanjana, Sonakshi explains that she is glad no one is in her office so they were able to meet here, Sonakshi explains she has a good news that Parth agreed to be a witness against Sanjana but even more that Sanjana is not an interior decorator but a software engineer, Dev in shocked exclaiming she got the job on that basis.

Dev explains even he has good news, he shows her the video recording where Sanjana accepts that she doesnot have any relation with Dev, Sonakshi smiling mentions now Sanjana would finally go away from them all, they hug each other. Sanjana standing in the corner thinks that both are having fun after using her name, she exclaims Dev has made a mistake by using her name so she will now make them pay, they will get hurt more after falling from high up the building.

Ishwari lights the Diya for the pooja, she is about to start the prayer when the Diya is about to go out when Baldev prevents it, Ishwari is amazed to see it, he asks why did she treat him as an outsider because he got to know the truth from the television and what they are saying against Dev is not right, even she knows that Dev is not that kind of a person, Ishwari explains he should never do anything like this because there are certain things which he doesnot know about.

In the house Soha is sitting while Aayush is massaging her head while Shuv hands her the juice, she explains that Aayush can do much better like Dadi and even asks Shuv for another juice, Sonakshi standing at the door questions what is going on, Soha explains that today is her day so they both cannot tease her so she is making sure she gets all the preferential treatment otherwise they would start teasing her from tomorrow, Sonakshi questions how did she make them both do it, Soha explains she promised to share the ladoo which Dadi makes, Sonakshi praises her then asks them all to come downstairs as they are waiting to start the pooja.

Radha standing with Ishwari and Neha exclaims she is glad that Sanjana accepted her fault so Dev was finally able to be evicted from that heinous charge, Sanjana doesnot really know Radha as if she ever comes infront of her then she will beat her, she even crushes one of the ladoo, Dev enters the house, Ishwari immediately goes to hug him, requesting that he doesnot force her to act as she is really old, Dev praises her for the acting, he greets Radha and Neha, Baldev also greets Dev, he inquires about his trip but Baldev explains he is really angry because so much happened after he left yet no one dared to inform him not even Radha, she exclaims he is not understanding the reason, he has high blood pressure so she thought if anything happened to him, and there were a lot of troubles going in the house so if she told him then they would have doubled, Baldev exclaims she herself is the biggest trouble.

The children rush to greet Dev, Soha exclaims she was not able to sleep without him, Dev replies he also missed them a lot, Shuv starts climbing on his back, Dev questions what is he doing however he doesnot come off, Aayush and Soha also are really excited, Dev requests Sonakshi to help him, she however encourages the children to do it properly since their father came after a long time however Neha makes Shuv come off, Dev exclaims that his sister came to his rescue, Shuv mentions it is because of the event however he spells it wrong, Soha corrects it while everyone shares a laughs, Dev smiles looking at Soha.

Sanjana knocks on the door of the grandparents of Aayush, Aayush’s grandmother questions why she has come back, Mr Verma even mentions that she doesnot have any relation with them so should not have come, Sanjana mentions that she is the sister of their daughter in law, they both reply that the one who had any relation with them, Sanjana however requests to come inside.

The pooja stats, Ishwari starts with performing the pooja for Baldev, he presents her with a gift, then Neha also performs the pooja of Dev, he terases her so she complains to Ishwari, he even asks her to see her son, Dev then hands the gift, she performs the pooja of Vicky also apologizing to him for misbehaving because she accepted the advice of Sanjana, he accepts there is nothing wrong with having a second opinion and even he experienced the same thing during his early days, Neha agrees. Sonakshi then performs the pooja for Saurabh, he hands her a heavy gift when she questions if it actually has a gift, she explains that he once gave her rocks, hearing this everyone starts laughing. Soha even performs the pooja of both Aayush and Shuv, Aayush hands her the gift explaining it is for her doll house, she opens it in excitement however is scared to see the spider, she throws it at Radha who also gets scared, Soha starts running after them both.

Sanjana tries to give Mr and Misses Verma some chocolates assuring they are sugar free, they both however are not happy, Sanjana exclaims that she was really missing her sister so decided to come to them as they have also lost their son, she doesnot have any family just like them both, she wants to be with elders who will give her blessings, she requests them to allow her to become a part of their family.

The entire Dixit family is eating together, Neha explains she really trusted Sanjana and even accepted whatever she said, she apologizes to Sonakshi mentioning how she created a wall between them both just because of Sanjana, Dev explains Sanjana has manipulated a lot of people in this house so she doesnot have to apologize, Sonakshi explains she got to know that Sanjana is actually a software engineer and not an interior designer, Vicky is shocked, he explains that Sukhi told him that some lady came to the office claiming that Sanjana stole her designs but he did not pay any heed to it however now it all makes sense, Dev also mentions how he believes Sanjana was behind the raid yet as even the officers said that someone from their office tipped them, he instead got suspicious of Sukhi, he has apologized to him so hopefully he will re-join soon.

Sonakshi explains that the list of Sanjana’s wrong doings is getting bigger day by day so they must surely do something about it.

Precap: Sanjana exclaims that she is going to leave this job, Sonakshi warns her to stay away from her family, Sanjana replies Sonakshi does not even know what is happening with the family she is claiming to protect. Misses Verma exclaims they have done everything according to their desires but not anymore, Ishwari in shock asks Mr and Misses Verma what has happened all of a sudden, Mr Verma replies they have come to take back their daughter in law and will not leave without her, Soha is shocked to hear what they are saying. 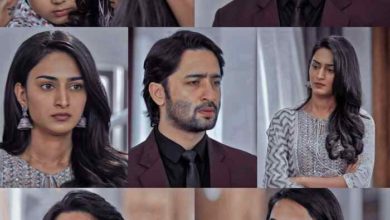