The entire Luthra family is rejoicing that Rishab has been nominated for the business man award, he explains he wanted to see this smile on her face, the entire family starts teasing him but he replies he thought the entire family would be joyed after hearing this news, Shristhi replies he is right since the entire family was suffering since the past few days and even Kavya is unwell, Rakhi assures Preeta there is nothing to worry about since Kavya just got scared after the incident, Sameer mentions even then Preeta would be worried so Rishab says that she should be protective as she is the mother.

Anjali comes asking where is the boss, he points to her back when Arjun walks angrily to the breakfast, she sitting exclaims is he not looking handsome, Arjun sits down without responding, Anjali questions why did he not praise for the compliment, Arjun replies she did not say it to him but was talking to the worker and he is not in the mood, Anjali smiles saying but she is always in that mood and he can give her the compliment, she notices he is still furious so apologizes.

Rishab informs how they can go to fill the form tomorrow since they have to be with kavya today but Preeta suggest why can they not complete the form right now because Kavya will also wake up after an hour or two, Rishab leaves to get ready. Shristhi whispers to Sameer how she feels Rishab jij has started liking Preeta di, he also agrees mentioning this is what he also thought, they both start quarreling as Shristhi questions then why did he not tell her, she hits him in the stomach, Bani Dadi notices it so inquires if they are once again fighting, Shristhi getting stunned so hugs Sameer assuring they are not at all fighting but after that realizing what she has done runs away.

Anjali is sitting at the table when she also gets a call from the representative who informs that Arjun has been nominated for the business man of the year award, Anjali runs to him and even tries to dance, she says does he know how jealous Rishab would feel when he comes to know of this, Arjun exclaims Rishab will have to pay the price in each and every field, Anjali also follows him.

Preeta and Rishab go to the conference room but he leaves mentioning that he forgot some belongings in his car, Preeta is sitting when Anjali walks in the conference room, Preeta is tensed and asks why is she giving them both the papers when the representative informs that this award is a joint venture between the both of them and it is being given to them both. Anjali exclaims when their partnership has ended so what is the need of this joint award as they are rivals.

Rakhi is praying in the Mandir exclaiming her family should always be protected but she feels a sudden gust of wind which scares them.

The representative apologizes as she did not know their partnership has ended but this award is a competition which would be announced after two weeks, Rishab exclaims that may the best man win the award, Arjun also agrees with but then Rishab and Preeta leave followed by Arjun.

Rakhi is really tensed in front of the Mandir, Kritika comes questioning what has happened and even calls Dadi who is shocked to see her so tensed, Dadi making her sit down on the bed asks if she knows when her right eye blinks then something bad happens with Karan, Rakhi exclaims she feels Karan is in trouble however Dadi asks how can it happen since Karan has died, Rakhi is really scared for Rishab, Dadi assures it might just be her thoughts, Kritika brings the glass of water asking her to not think as sometimes such things tend to become the truth, Rakhi exclaims she prays it is the truth since it will mean karan comes in front of her eyes so she is able to see him. Dadi exclaims whatever happens in their lives if up to the fate, Rakhi questions what Bhagwan has done with them since her young son left them all in front of her eyes so she will not be able to forget this pain.

Shristhi hearing the conversation thinks Rakhi cares the most for Rishab and also used to do the same for Arjun so she knows what she is feeling.

Preeta and Rishab reach the car when kavya calls her asking when is she coming back since she has to go to her school, Preeta explains the school is closed and so she should rest for few more days however Kavya insists on going, Preeta informs she will come back and then take her, Rishab suggests that Preeta must let her go since she will feel nice after being around her friends. Rishab helps Preeta sit in the car, she notices Arjun is staring at her and he tries his best to act as if he doesnot care, Anjali comes informing she had to sign some papers, Anjali questions what has happened when Arjun informs Kavya is ill, so he wants to meet her, Anjali questions if he has gotten mad since Preeta just handed him the orders yesterday.

Arjun explains he knows what happened but requests Anjali to arrange so he talks with Kavya, he requests her when Anjali replies he always takes advantage of her but Arjun informs he has never taken advantage of her, he explains Rishab has gone with Preeta who will take kavya to school so she knows what to do, Anjali says she doesnot want him to thank her however he has to do something for her which is to make sure he wins the award.

Preeta and Rishab take Kavya to school, Anjali is staring them and thinks she would go to meet Kavya when they both leave so she is able to get him talk with Arjun. Preeta explains she will take the cab back home while Rishab jee should go to his meeting.

Anjali rushes to greet Kavya asking how is she feeling now, she replies she is very angry with Mr Handsome since he did not come to visit her, Anjali explains she can make them both talk to eachother.

Preeta in the cab realizes she did not give the tiffin to Kavya, she calls Rishab asking him to look at the back seat but only after stopping the car, he thinks Kavya forgot the tiffin when Preeta mentions she made the things which kavya likes and doesnot know how she made such a big mistake, Rishab assures she must not be tensed as he will also give her the medicine.

Anjali calls Arjun asking if he was driving but he says he has stopped the car, Kavya takes the call mentioning she is really angry with Arjun since he did not come to meet her, Arjun explains he came to meet her but she was sleeping, Kavya suggests they should meet in the evening today and ends the call, Arjun thanks Anjali for her help, she replies she just wants him to fulfill her desires. Arjun is glad he was able to talk with Kavya exclaiming she has no idea how excited he was to meet her as he only loves her in this world, he will make sure she comes to stay with him. 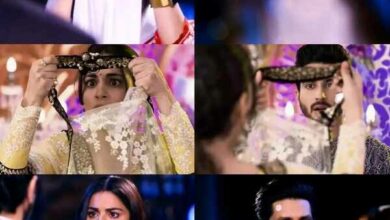