Rishab explains he was not able to come back, Rakhi questions the reason so he reveals they trapped him in a fake drug case, Rakhi exclaims he should have at least called them once, he has an entire family who would have come to save him, Rishab replies they did not even give him a suitable lawyer who would fought his case, he instead trapped him even further, he only got to know this today when Preeta jee came, the lawyer had taken the money to lose his case on purpose, the person who was behind it all desired the business in Dubai and all of his property which he refused to sign, he was sentenced to be hanged for drug abuse, Rishab informs the women whom he is leaving is the reason that he came back to this mansion, they today morning for the first time said that he is free and when he came out of the cell, he was amazed to see Preeta jee who assured that she is going to take him back to his house, Rishab explains he felt Preeta jee was sent as a Bhagwan for him, she had all the proofs for his innocent and made sure he got the bail.

Preeta walks close to Rishab jee mentioning she did not say anything to Karan because there was not enough time, karan in anger tries to walk towards her when Rishab stops him mentioning that he would not do anything, Karan gets really frustrated questioning the name of the person who is behind it all, Rishab replies he would not do anything but karan insists, Rishab replies he lives in this same house with them all, hearing this everyone is shocked so Karan once again asks the name when Rishab turns to Prithvi asking if he should tell the truth,

Karan turns in anger rushing to beat Prithvi, he tries to explain himself but karan in the frustration doesnot even listen to anything that he has to say in his defense, Karina is terrified when Karan picks up a metal rod and is about to stab Prithvi with it but stops because Rishab holds his hand pushing him back, he insists karan must listen to him and even Mahesh starts hitting him. Preeta thinks she is glad that she hid the truth from karan because then he would not have been able to reach Prithvi in time.

Rishab calls Sameer to control Karan, prithvi tries to explain he did not do anything when Rishab stops him asking him to tell the truth, Preeta explains if he is sure he did not do anything, she exclaims now she is going to show the proof, Preeta plays the video of his confession in which he is accepting that he is the one who sent Rishab Luthra to jail and then even planted a fake friend who would ruin his life, he is the one who hired the lawyer.

Rishab explains he can take his life for all the days which he spent in jail but he is glad he is living with his family, Kritika kneels down in despair, Rishab warns Prithvi to get out from the house but Preeta explains she is going to do it herself so she pushes Prithvi out of the house while everyone is staring at her, Preeta explains now the police would judge him because his destiny could only protect him for so long, his game has ended.

She closes the door on his fac when Prithvi in anger starts thrashing the stand, Rishab asks Preeta what more will she do for this family as thank you is a really small word for her, Rishab thanks her for making sure he came back as she returned his life and no one would have been able to do it, if she was not here then he would not be with his family. Rakhi also thanks Preeta when Rishab mentions that one thing is still left, he apologizes to the guests for ruining their time. He asks Ganesh to show them the way out,

Rishab turns to Sherlin asking if she would not be able to match her eyes and not ask how he is as she is his wife so this is the least she can do, he asks if she is herself going to tell her story, does she want to leave this house with dignity or should he insult her, Karina questions what is he saying but Sherlin refuses when Rishab informs Sherlin was having an affair with Prithvi and it had been going out for quite some time, Kritika leaves crying. Rishab reveals he went to Dubai because of her since he thought he would do something to her thinking he will come back and then divorce her but he will finish it now as she is going to leave this house and his life tomorrow morning,

Sherlin replies she is going to leave but will take the alimony, Karina yells at her in anger slapping her, Rishab replies this was her answer to alimony and he is going to show her what it mean to be dragged in the court, Rishab leaves warning that she has just this night and must leave in the morning.

Rishab warns Karan to not even think of hurting Preeta jee, he does not understand but Preeta leaves when Shristhi tries to follow her but Rishab explains she should be given some time and then he asks Karan to go after her but karan exclaims he wants to live with him for some time, Rishab asks all of his family to come since he has longed to hug them.

Preeta is walking when Natasha stops her questioning why did she come back because she left karan, Natasha is sure that he also loves her because he would have married her but she came back so she also deserves his love, Preeta warns her to not think of these things because she did not express her love to karan after which he will throw her out of the house, Natasha leaves threatening to marry karan within three days.

Rishab is feeding Mahesh with his own hands while Karan and Rakhi are standing looking, she explains there was not a single day when she did not think of him and they used to live but were just as souls, Rishab exclaims that he dreamed of Bhagwan who said that he must return back home and so Preeta jee came as Bhagwan for him. Mahesh demands his soup when Karan gets jealous mentioning they all forgot about him just as Rishab came back, Rakhi replies this can never happen. Rishab stops her asking if she doesnot know how he is as whenever someone gives him more attention the he gets jealous, Rishab pulls karan who sits on his lap, he explains he was just joking since he is really glad Rishab came back as he can take care of him, Rishab replies this doesnot mean he should become irresponsible so must take this bowl and feed Mahesh papa, Rishab leaves, Natasha gets shocked seeing him so runs away. Rishab feels something is not right.

Karan is with Mahesh papa who exclaims he can drink the soup by himself but is feeling nice when his sons are feeding him.

Preeta is sitting on the bench crying, recalling how karan was about to get married with Natasha had she not come back on time, she exclaims why does she always have to prove her love to karan as he must understand that their Bhagya had adjoined, she keeps crying. 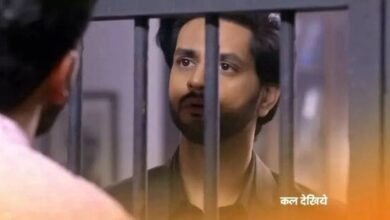 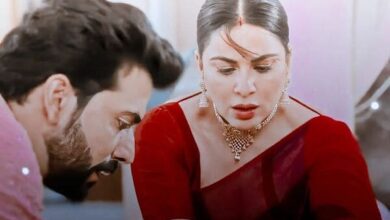 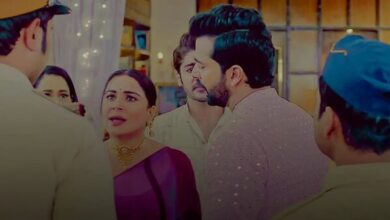