Kritika leaves with Rakhi, Prithvi coming from behind asks Sherlin what happened, she asks him to at least inform the nurse Mona to be careful because she hit Rakhi so hard that she hgas gotten injuries on her hand, she must not harm Rakhi, Prithvi questions why when she exclaims that Dadi and Karina do not enter the house and only Rakhi helps her, Prithvi leave after getting a call.

Sarla exclaims she has never told her about Pragya but now will tell her everything, Preeta questions what does she want to tell her, Sarla asks that Mahesh met her, requesting her to come and save them from prithvi who has taken control of all their things, he is sitting like snake, Sarla asks what relation does she have with any one of them, they did not come to ask how she was in the past two years, Sarla questions if she is a police officer because of whom Prithvi would give the belongings, Sarla says they love both Rishab and Karan but Preeta loves their family more, Sarla requests her to not think of them more then her own family because this is what Pragya did, even then she had three people who were with her in that house and even then she tried to fight them all, but she also left that house after she thought that the child which Tanu has belongs to Abhi but she came back to her house, when Pragya found out Tanu was lying, she went back and even had the grandmother of Abhi, her own sister bulbul but it took a lot of time, she used to cry every night but she saw those tears, how would Preeta be able to fight this war when no one in that house is on her side, how will she be able to fight when she is alone, against Prithvi who can switch his side, for those people who blame her for marrying Karan because of money.

Sarla says that she doesnot have the situation like Pragya who felt hurt, how will Preeta manage to face it all, which is why she is requesting her to not go back to that house because she cannot once again see her daughter face this situation, she doesnot know how much longer she would be able to live but Preeta doesnot have to be so nice, Sarla tries to force Preeta to make a vow that she will not go back to that house and will listen to her mother, she cannot see Preeta in pain which is why she must promise her, Preeta is not able to see her mother crying so hugs her.

Kritika walks into the clinic with Rakhi, she asks the ward boy about a physiotherapist since they really need someone, he leaves to bring them when Preeta is in her clinic she instructs the nurse to look after her clinic as she might get late tomorrow, Preeta walks out when she is shocked to see Rakhi standing, she immediately hides in another cabin then orders the nurse to send those patients standing at the reception to Doctor Juhi since she needs to make a call, the nurse asks Rakhi to come with her, she leads her to the cabin then leaves asking them to wait for some time.

Rakhi requests Kritika to not tell the doctor that she got injured because of the hunter, Kritika agrees that she will not tell anyone, she knows Rakhi doesnot want anyone to know how poorly they are treated in the house as Prithvi treats them all like an animal, she asks Rakhi if she is bearing this all that Mahesh gets the full treatment, Kritika says she cannot watch her uncle like this as he is locked up in the basement and the nurse beats him, she feels that the nurse hit her purposefully because she tried to meet Mahesh, Kritika assures that she would not let anything happen, Rakhi stops her saying she doesnot want anyone to know about the hunter, but what will happen if Prithvi finds out otherwise he would behave even worse, Kritika assures they will not tell anyone. Preeta is standing behind the cabin crying, Rakhi suspects someone is there.

Doctor Juhu enters the cabin asking who the patient is so Rakhi goes to sit in front of her with Kritika.

Prithvi is looking at the laptop and he is really tensed, Sherlin coming to him asks what has happened, he says that he wants Karan and Natasha to get married as soon as possible, Sherlin exclaims she has tried a lot but he doesnot even see her with that look, Prithvi exclaims he doesnot want to hear this, because Mahesh might die really soon because his reports state that Mahesh has been over dosed, she should lower the dose, Prithvi exclaims he doesnot want Mahesh to die before karan gets married to Natasha, otherwise their entire plan would be ruined. Prithvi informs that she must ask Natasha to take the same route which she took to marry Rishab, and just like Monisha who would have married karan had it not been for Preeta, she should arrange a birthday party in the night as Karan is usually drunk, she should take advantage of that moment, she should send either of them to one another and place a lot of cameras, so both of them are in the same room then the next morning, she should give Natasha some dialogues which she would tell everyone, because no one would believe Karan since the CCTV footage would prove, Karan will have no other choice to marry her.

Preeta while walking in the night, is thinking how Kritika exclaimed that she will not tell anyone how badly they are treated in that house, Preeta standing in front of the Mandir questions how can she help those who hate her even when they used to love her, why is she turned back to the same city after two years and she tried to move on but how is she still feeling the same for those who hurt her, why is she worried for them all, she doesnot know why can she not sleep even when she hears them all blaming her in her dreams, she knows Mahesh considers her as his daughter but what would she be able to do anything against Prithvi when Karan and the entire Luthra family is helpless, Preeta exclaims sometimes she thinks of not going to that house but she still desires to go, her mother said she must not go there as they all hate her, should she listen to her mother as an obedient daughter and not go there or listen to the cries of her father in law, she exclaims she really doesnot know what to do, should she sit back and watch everything s she doesnot understand anything, Maa should show her the path as she is at her feet, she kneels down asking for an answer not knowing that her Mang has filled, she takes the warmth when she realizes the Sindoor on her Mang, so starts weeping saying she has understood that she gave the answer after filling the Mang, she also desires the same as the heart of Preeta, she will go to save her family, which is her order and her own desire, might be the right thing to do, she prays for the strength. 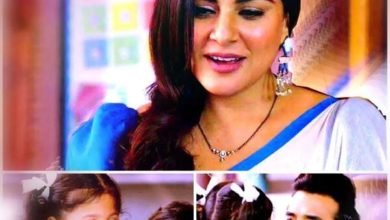 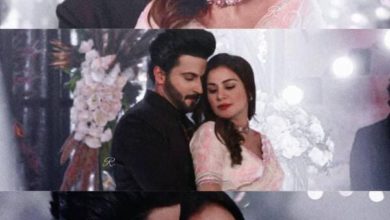