The prosecutor exclaims why is he feeling that the defence is trying to argue with him to take time when the defence exclaims that he is forgetting that he has asked for the time which the court allowed, the judge exclaims that the time has ended so he should call the witness, the lawyer going to Preeta asks her to call Sundeep otherwise if he doesnot come then they might lose this case, Preeta requests the court for the time to speak, the judge allows her saying that she can say whatever she wants in the witness box, Preeta standing in the box exclaims ever since Rishab Luthra was charged with attempt to murder, they all know that he is innocent and did not do anything wrong, Mr Shukla stands exclaiming they care for her sentiments as a family member but the court will not accept her witness so he requests her to go back and sit on her seat.

Preeta exclaims Mr Shukla the last time exclaimed that Sundeep cannot walk again maybe for the rest of his life because of the injuries and for that purpose he is worried about the care of his family, Mr Shukla agrees when Preeta exclaims he was lying because Sundeep can not only walk but can also run, eat, or do anything which a normal person can do, Mr Shukla once again says that he has heard such arguments a lot of times from the family members, Preeta explains she has proof of what she is implicating as she herself made a video which shows Sundeep walking, she shows the video to the judge who is also shocked to see that Sundeep is walking without any hurdle, the defence and the prosecuting lawyer both also view the footage, Mr Shukla objects exclaiming this footage might be doctored but Preeta assures this is an authentic video which was shot quite recently, The judge exclaims that this video is derailing the case which is originally against Rishab Luthra, Preeta insists that this is the proof, the judge remarks that they will send the video for analysis to the forensic team, but also advises Preeta to make sure Sundeep comes to the court as he is the biggest witness which they have. The entire Luthra family is stunned.

Sundeep is trying to evade Prithvi with all his might, running up the blockages set up on the road, Prithvi rashly driving the car thinks where Sundeep would run away as the only place where he can go is up to Bhagwan, Sundeep comes on the road where he sees Prithvi coming straight towards him, Prithvi with a smile locks the car in the gear, hitting Sundeep who falls after flying some feet away from the car, he sustains injuries on his head which starts bleeding.

Prithvi with a smile step out of the car, Sundeep is shocked to see him, he starts screaming for help while Prithvi is walking over to him, he comes to sit beside Sundeep asking if he did not tell him that he should not cheat otherwise he would ruin him to the extent that he will never be able to do anything, even then he thought of cheating, Prithvi exclaims before he was acting in the hospital but he really made him into a broken man, Prithvi assures this is the end for him because his story will end, Prithvi explains how will he go to hell, he gives Sundeep two choices either to die or live, Sundeep once again cries for help when Prithvi exclaims he will once again take back the car and come to towards Sundeep, he cries for help in pain but Prithvi takes back his car but before he can come towards Sundeep, some people rush to help Sundeep exclaiming they should call the ambulance, Shristhi and Sameer also see the people, they both wonder what might have happened, Prithvi then drives off, Shristhi and Sameer both step out and seeing it is Sundeep put him in the car towards the hospital.

The judge exclaims the time of the court is being wasted so they should call Sundeep, Preeta mentions he was about to come to the court but has not come here, until that time his fiancé can give the statement on his behalf, Mr Shukla stands exclaiming that Preeta should not insist on calli9ng his fiancé she is neither a technician nor a doctor so how would she be able to reveal the truth, Preeta explains she can at least point towards the fact that can Sundeep actually walk, Mr Shukla exclaims she can say it after listening to Preeta, even he will say it but the court doesnot accept majority as the court demands proof which she doesnot have, Preeta then asks Mr Shukla to prove that his client was actually hurt when he is saying she is not able to prove that he is not injured. Preeta holding her hand requests the judge that until Sundeep is present in the court and reveal whether he was injured or was hurt, he should not take any decision, Mr Shukla once again says this is the court with certain laws and a judge, even then Preeta is taking her own decisions, the judge mentions she is right because Sundeep was about to come today as a witness from Preeta’s side while a client from his but since he was not able to come today the court cannot reach any decision and is adjourned till tomorrow, they take Rishab away while Rakhi starts crying.

Karan is waiting in the car while following the assistant, he sees that the assistant met someone and sat in his car to leave, Karan thinks the court hearing would have ended so calls Preeta asking if Rishab was released, Preeta replies that he will be released tomorrow, Karan gets worried thinking Rakhi would be really worried, Karan immediately ends the call exclaiming that he will also be present in tomorrow’s hearing.

Shristhi and Sameer both reach the hospital with Sundeep, they immediately call the doctor who take him away, Shristhi thinks of calling Preeta, she informs they have found Sundeep, but he is not in a good condition and really injured, Preeta exclaims she knows who would have done this because prithvi was not in the court, Shristhi exclaims that he was in the court but Preeta mentions that he left in the middle of the hearing, Preeta questions if Sundeep is alright because she is feeling guilty as she promised to protect him, he was already scared of Prithvi, she advises Shristhi to always stay beside Sundeep, Shristhi explains they are in the same hospital where Preeta used to practice, she advises Shristhi to take all the measures while she will also personally call each and every doctor she knows.

Preeta is standing when Rakhi at once questions why he did this to her family, Preeta sees Prithvi standing behind her, Rakhi in anger tires to walk towards him, Preeta stopping her asks Rakhi to come with her as she needs to talk with her, Prithvi while standing thinks that Rakhi has once again gotten angry at her daughter Preeta because she once again lost, as she was never before able to stand before him, Prithvi leaves with a smile.

Preeta takes Rakhi into the kitchen, she explains she gets really angry whenever she sees that man, Preeta replies she knows how Rakhi is feeling but she should control her anger because if Prithvi comes to know of their plan then he will surely ruin it, she should just wait one more day after that she can hurt and beat him as long as he wants, she should wait for Rishab jee to come back, Rakhi replies she knows what Preeta is saying is true but she feels like killing him whenever she sees him, Preeta hugs Rakhi requesting her to wait for one day, Sameer and Shristhi both are tensed to see them both, Shristhi questions she promised Rakhi to wait for one more day as she would be able to bring back Rishab, Preeta replies she doesnot have any plan but was not able to see Rakhi maa like this so gave her hope, she was not able to see her like this but cannot understand anything, Preeta then thinks what if she is realizing something, Sameer and Shristhi questions her about what is she thinking.

Precap: Rakhi is walking when Karina stops her revealing that Sanjana has gotten a heart attack, Preeta asks the nurse to always keep an eye on Sundeep and if anything wrong happens then she should inform her, Karina and Rakhi both inform Sherlin that her mother has gotten a heart attack, they advise her to go be with her as soon as possible. Preeta assures Prithvi that Rishab jee would celebrate the function with his family as always, Prithvi is shocked to hear how confident Preeta is. 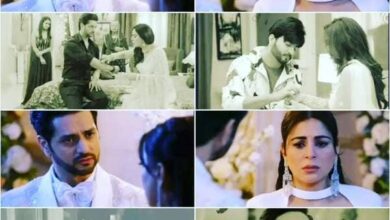 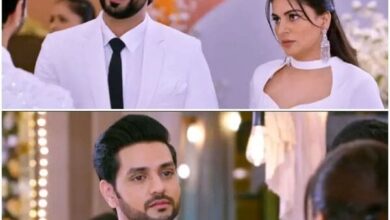