Raghav says to Jaya, why scare Esha, this must be by some servant and no ghost, Esha make it again, Jaya says I don’t want to eat and leaves. Sunny confused and says I have to talk to Esha.

Sulochana says to Milind, I won’t leave this fake one easily, I will prove myself correct and you wrong and this is my family and will support me and not this fake one.

Esha in her room confused, Sunny walks in and asks what all is this, Esha says I cooked Halwa for Jaya Aunty to impress her, Raghav told me, Sunny says might be he changed it, Esha says not possible, Raghav is mine now and may be Keerti and Jaya have done it, Sunny says not possible, they don’t all this childish things, Sunny says then Pallavi for sure, Esha says she isn’t here, how will she and leaves. Sunny thinks what is Esha hiding.

Rajni asks Milind why is so worried, Milind says we did all this to teach Sulochana a lesson and live for family too and not selfish but we failed Sulochana will never win, Rajni says new things always have lot of hurdles, its easy to give up but why did we start, this…

( Rajni in past scolds Milind he is marries man and he doesn’t look like someone who will have marital affair, what is it, and if you have fought with wife doesn’t mean you go find someone else, ask your heart who it loves truly, Milind think’s of Sulochana and says only my Sulochana, and sorry Rajni, I know you are right, Rajni says its okay I forgive you and if you love your wife make her realise her mistake, Milind asks how, Rajni says that you may know, Milind says I need your help for it, I can’t force you but please, Rajni says agreed but you have to give me Puran Poli as a friend, Milind says thank you)

…..Milind says thank you Rajni for being there as friend and lets fight to teach Sulochana a lesson.

Keerti, Raghav and Jaya laugh and tell Pallavi about how scared Esha is, Jaya says we will do as discussed right, Raghav says yes. Raghav hears footstep and Pallavi hides quickly, Sunny walks in and says Keerti its your soup time, Keerti says let’s go and leaves with Sunny, Pallavi comes out and says Raghav lets quickly execute next step even I have to go home and help Amruta.

Esha walks to Jaya, and says let me talk to her she must be upset because of halwa, Esha says Jaya Aunty you need anything, Jaya acts as if she is possessed and says I will tell everyone, you killed me and threw me in lake. Keerti walks in and hands Aarti thali in Jaya’s hand and both leave. Raghav walks in, Esha scared, Raghav says relax why so scared what is wrong, Esha says did you tell about Pallavi to Jaya Aunty, Raghav says have you lost it why will I, Esha says she said I killed her and won’t spare me, Raghav says let me talk to Amma, Jaya and Keerti walk in, Raghav asks where were you, Jaya says I went to temple, why, Raghav says nothing, Jaya and Keerti leave. Raghav says did you see some ghost Esha, what nonsense are you talking, Esha runs to her room.

Esha in her room scared and says what is this happening, Esha sees in mirror Pallavi covered in blood and shouts, she opens her eyes and sees no one and calls Raghav, Raghav rushes in and asks what is wrong, Esha says Pallavi is here, Raghav says have you lost it, calm down its just because you shot Pallavi, you are seeing all this because you are scared, how will dead be alive, Esha says ghost, Raghav says what nonsense we are educated and we are together after so long, so enjoy this time and focus on impressing my family. Esha says you are right and hugs Raghav.

Pre cap: Pallavi scares Esha again, Esha says to Raghav, I don’t want to stay here this house is haunted, Raghav shouts at Esha and says I won’t let you go so easily. 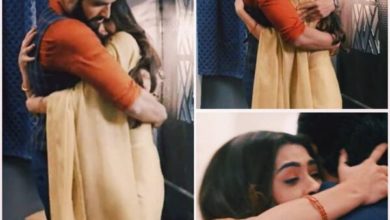