The Episode starts with Suhani asking Mamta to have some strength and tells that Ranveer will be proved innocent. Mamta says I trust you fully, nothing can happen to Ranveer when you are here. Ranveer looks at Suhani from the Police custody. Raghu gives tea to Vikram and Dada ji. The Judge tells that the Police couldn’t show the proofs against Dr. Ranveer Oberoi, and that after hearing the witnesses and seeing the proofs, it is proved that Dr.

Ranveer Oberoi wants to saved his patient’s life. He says he did a crime to snatch Police’s gun and attempt to elope, but after hearing the audio, it is proved that he had escaped to save Dr. Suhani. He says he is freeing Dr. Oberoi from all charges and warns him not to do this again. Ranveer thanks Judge. He comes out and calls Suhani. Suhani sits on Aditya’s bike and asks him to ride it. The media surrounds Ranveer and asks what will be his step after getting freed from the charges.

Aditya asks Suhani why she didn’t meet Ranveer. Suhani says what I would have done meeting him, there is nothing to talk.. Aditya says Dr. psycho will come home to meet you. Suhani says you don’t know his ego, I didn’t turn and look at him even once. He will not come, his ego is big. Ranveer comes there in his car and asks Suhani to stop. Suhani ignores him and goes inside the house with Aditya.

She locks the door. Ranveer asks her to listen to him once, says you knows well that I will not go without talking to you, says whatever you did for me and my family, I want to talk about that. Suhani says I did it for my profession. Ranveer says you are lying and that’s why couldn’t see in my eyes and say.

Rakesh scolds Suhani and says that’s why I asked you not to support him. Ranveer says I didn’t thank you once for taking stand for me, please open the door. Dadi says it is enough of drama, I will make him go. Aditya says Ranveer is stubborn, he will wait outside if you ask him to go.

Suhani is in her room and looks out through the window. She recalls Ranveer and her moments. Ranveer also thinks of their moments. Suhani thinks of his hatred. He says I will not go without meeting you, Suhani. Suhani says there is nothing left to talked about, we will get only the pain.

Dada ji comes there with Vikram. Dada ji tells Ranveer that when Suhani wants to talk to you, she will talk. Vikram asks him to give sometime to Suhani. Ranveer says she has done so much for me, I need to thank her. He says we need to talk suhani. Suhani is crying in her room. Dada ji asks Ranveer not to be stubborn and come home. He says Mamta is waiting for you.

Vikram says since you went to jail, bhabhi didn’t have food properly and asks him to come home. Ranveer turns to go with them. He looks back and goes. Rakesh, Dadi and others come to the room. Dadi says stop crying, he went away. Rakesh says we all were proud of you, but today you shall feel proud of yourself, you have proved him innocence, and didn’t come with him, taking stand for yourself. Suhani tells him that she heard pain in his voice and not anger, may be he really wanted to meet me.

Dadi asks why you didn’t meet him. Suhani says it was my guilt that he went to jail. She says so much happened, how to talk to him. Sudha asks her to forget him. Aditya says you shall focus in the hospital. He says Mamta hospital; and govt hospitals patients are shifted in our hospital. Suhani blames herself as Ram Singh is in coma, as she called Police else he would have been fine. Aditya says you was doing your duty, so blaming yourself. He says Ram Singh’s life can be saved even now.

Ranveer comes home with Dada ji and Vikram. Mamta takes off bad sight from him. Vikram tells Dada ji that all the restrictions were lifted from us, our accounts are freed, and we can now function Oberoi group and Mamta hospital. Dada ji says it is good. Dadi asks Ishaan to keep some movie. Rakesh asks Suhani, how was the first day? Suhani says good. Ishaan tells Suhani that Mamta hospital can now start functioning. Aditya calls Suhani and tells that there is a movement in Ram Singh’s body. Suhani says she has to go. Rakesh asks Ishaan to drop her.

Ranveer is in his room and thinks of Suhani, Dada ji and Honey’s words. He looks at Suhani’s pic in his room and says I thought wrong about you, gave you so much pain, but you did so much for me, stood by my mother and cleared all charges off from me. He says how to tell you, that I want to meet you once and wants to tell you that whatever you did for me, means a lot to me.

Anupamaa : Toshu Reveals Everything to a Shocked Anupama! 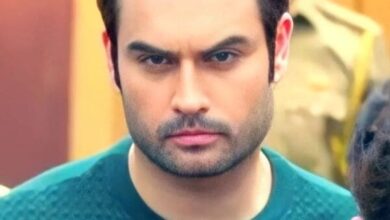