The show begins with Suhani showering flower petals on Mata Rani. She says Maa says that don’t tell God, how much big your problem is, but tell the problems how much big, your God is. She opens her eyes and tells Mata Rani that she told everyone, including her problems that her Mata Rani is the best. She asks her to give her good news and make the day. She takes her phone kept there and checks the result. She then thanks Mata Rani and walks away from there. She comes to the kitchen and calls her mother. Her mother turns smilingly and asks what is the result? She asks if there was any advantage of threats given to Mata Rani. She asks what is the result? Suhani says Maa, I have passed and got scholarship. Her mother asks why are you talking in low tone. Suhani says Dadi. Her mother says Dadi went to temple and your Papa will come tomorrow. She asks her to wait there and goes there. Suhani comes out. Her mother shows her apron with Dr. Suhani Sharma written on it. Suhani gets emotional and happy seeing it. Her mother makes her wear it. She then puts sthethoscope around her neck. She tells Suhani that parents see happiness in children’s success. She says when you used to do check up of everyone in childhood, everyone used to call you Doctor. Suhani says this dreama is ours, not just mine. She says you ask me to be happy always and today you have tears in your eyes. Her mother says it is the happiness tears. She plays the song and they dance.

Suhani gets on the table and dances, while throwing pillows down. Ishaan comes there and switches off the music system. Her mother asks him to play the song as Suhani cleared scholarship exam. Ishaan says its ok, but Papa came. Suhani’s father Mr. Sharma gives the exact amount to the taxi driver and gets inside the house calling Sudha. He sees Ishaan studying and Suhani cleaning the house. He calls Sudha. Ishaan comes there and greets him. Mr. Sharma asks him to be happy. Sudha brings water and gives to him. Suhani comes here. He drinks water and then looks at Suhani. Suhani takes her dupatta and wears it and goes to clean the TV. Mr. Sharma tells Sudha that Suhani is grown up now and asks her to make her understand. He goes. Suhani asks how we will tell about scholarship? Sudha says let him have food, then I will tell. Mr. Sharma asks Ishaan to have food. Ishaan says he already had it. Mr. Sharma asks him not to have junk food and asks him to become the doctor. Dadi comes there and scolds Sudha for not putting butter on the paratha. Suhani asks Sudha to talk to Papa. Just then she gets a call from Rhea. Mr. Sharma asks her to show the call. He says you didn’t stop talking to her, and tells that he don’t want their daughter to learn bad things from such rich girls. Dadi asks him to have food. He says he had enough. Sudha goes to Mr. Sharma and says I want to talk to you. Mr. Sharma gets a call from his boss, who asks him to bring the file. Mr. Rakesh Sharma says ok, I will bring and tells Sudha that he will talk to her in the evening.

While he is leaving, he asks for the file. Sudha says she has kept it in the drawer. He takes it and goes. Suhani calls him. Dadi says don’t call him while he is leaving. He goes out and tries to start the bike. Two guys sitting there, comes to him. Suhani comes out running and her dupatta falls down. The guys stare at Suhani and offers to help Mr. Sharma. Mr. Sharma signs Suhani to go inside. Suhani runs inside the house and takes her dupatta from floor. Mr. Sharma scolds the guys and comes inside the house. Suhani hides behind Sudha. Mr. Sharma asks didn’t I tell you, not to come out of house, bad guys are standing outside. Dadi taunts Sudha and Suhani. She then asks Suhani why did she go out? Suhani says Papa was taking wrong file. Mr. Sharma checks the file. Dadi says you would have told Ishaan or me, and asks why did you go. He asks her to give file. He takes it and tells that he will not bear such drama again.

Suhani gets sad. Sudha takes her to room and makes her sit. Suhani says Papa got angry, just as two guys saw me. She says do you think that Papa will let me study in co-ed college, he made me studied in girl’s school and college. Sudha says even she is scared of him. Suhani tells that today is the last day to get the form. They boost each other’s strength and says I thought of something to get your form. She asks Dadi if she can go to market to buy peda stuff. Dadi says ok. Suhani and Sudha come to the college. A modern girl Rhea gets down from her car and congrats Suhani for getting the scholarship. She hugs Sudha and asks her to make her eat peda. Sudha says I am going to get ingredients for it. Suhani says you are my friend and hugging my mom. Rhea asks her to bring pedas to college. She says lets go inside. Suhani waves bye to her mom. Suhani walks in the campus with Rhea and looks at the budding painters competing in the painting competition. She then sees the college boys playing sports while others dancing. The announcement is made for the football match and the trophy is shown. He says team legend captain Ansh is coming. Suhani asks college is filmy. She asks where is his special someone. Rhea says she will make her meet him. The host announces Team Victory’s caption and college topper will welcome the chief guest with Ansh. Ranveer is exercising.

Rhea smiles hearing Ranveer’s name and asks Suhani to go to admission counter. Suhani says I don’t know where is it? Rhea tells the direction and says I will meet my special someone and then will meet you. Suhani goes inside and touches the floor. The host tells that Ranveer is not here, but his besties might know. The friends tell that they don’t know Ranveer. Rhea comes there. They ask him, where is Ranveer. She calls her friend Palak and asks where is he? Palak says she is keeping eye on him. Ranveer is shown doing stunts on the terrace railing. Rhea makes video call and sees him on terrace. Palak says she knows that he is doing this stunt for the concentration before the football match, and says she can give him good luck kiss. His eyes are closed and he opens hearing her. He jumps from above her head and steps on the terrace. He looks at her angrily. Suhani enters the college. Ranveer holds Palak’s hand and takes her downstairs. Suhani is walking there.

Precap: Ranveer tells Palak that he does whatever comes in his heart and asks her to kiss him now, everyone is looking at them. Palak asks him to leave her and goes from there. She runs and collides with Suhani. Suhani is about to fall down the stairs, when Ranveer holds her hands and something falls on his shirt. 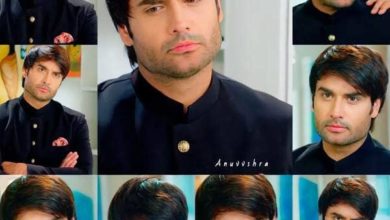 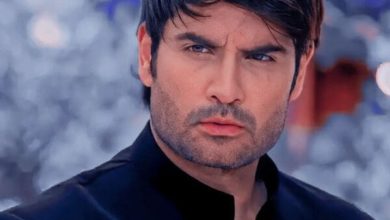 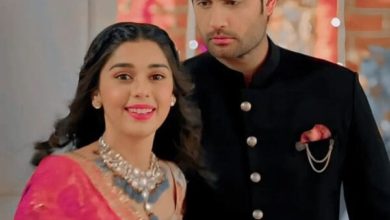 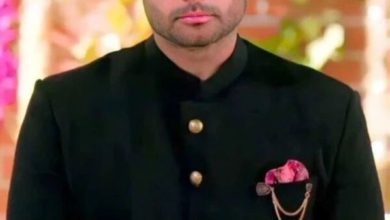