The Episode starts with Suhani trying to make a move from the ragging place. The senior who is doing ragging, calls Suhani and says now it is show time. Rhea and her father come to Vikrant’s party. Rhea asks why Vikrant uncle kept grand party in day time. Her dad says we shall ask him, I didn’t know. Vikrant asks waiter to be careful and says this party is due to this model. Waiter says sorry. Vikrant comes to Mamta. Media comes there and click their pics. Vikrant says thank you so much, enjoy the party. He tells Mamta that he is going to announce and says if your son doesn’t come then.

Mamta says I gave him my wear, he will come. Dada ji calls Vikrant and asks him to come. Vikrant touches dada ji’s feet and then Purohit uncle’s feet. Purohit uncle praises him. Rhea and her father Shashi come there. Rhea greets Vikrant as her bestie. Shashi asks about the surprise of the party. Vikrant asks them to have patience and says let Ranveer come. Dada ji takes Vikrant to side and says you should have asked Ranveer once, before making an announcement. He says he believes in ethics like me and not interested in money. Vikrant says Ranveer got everything served on the platter and says if he had to work hard like me, then I would have asked you. Vikram comes there and appreciates Vikrant for all his efforts to build the business, and says nobody else could do this.

Dada ji says brother’s chamcha has come and will start world war if anyone says against his brother. He says if this party would be get together then it would be good. Vikram’s wife comes there and says you said right, and says there are more deserving members in the family than Ranveer and says she has done BBM. Vikram says Samaira will go after marriage and says only Ranveer can handle the business. Suhani hears them. Rhea asks her to cheer up and says I know my bestie will value you. Vikram’s wife asks where is Ranveer? Ranveer reaches home.

Ansh makes Raghav and John have sandwich. Raghav asks him to tell the name of the person. Ranveer calls John and says their eyes shall be on his responsibility. John and Raghav make a move. Vikrant asks Mamta, if she was sure that Ranveer will not break your promise. Ranveer comes there and says he will never break. He says the person who doesn’t care about relations, from when he is caring about promise. Mamta says leave it, why did you get late? Ranveer holds her hand and she gets hurt. He asks her to show her hand and find burn mark on her hand. He says you showed me other hand on video call.

Mamta says that’s why you are becoming doctor and hugs him. He says this party is kept for you, don’t do any drama. He says your husband will do it, and says tell him not to do drama. Dada ji calls him. Ranveer hugs him and asks if he wants to make his Dadis’ mad. Dada ji says nobody has the quality of your Dadi. Vikram hugs Ranveer. Ranveer asks where is Ahana and Samaira.

Vikram says Samaira has come. Ranveer meets Samaira and calls her Hema Malini. He asks when she will handle the family business. She says the family wants her to get married and settled down and don’t want to go to office. Ranveer asks if she wants to take the business globally? She says yes. He says this is on me and goes to talk to Vikrant. Mamta comes on his way and asks Ranveer to get ready in the suit kept for him. Ranveer goes.

Suhani runs to a classroom, while the seniors are behind her. Rhea comes to Ranveer’s room and says welcome to your future room, Rhea. She admires his suit and falls on his bed. She says settle this room photo in your mind and says she will propose him in a grand way, that he can’t refuse. She hears the door opening sound. Ranveer comes to the room and takes off his jacket. He throws on the table, where Rhea is hiding. He gets ready in the suit. Rhea gets up. He doesn’t look at her and walks out of the room. Rhea smiles.

Vikrant asks everyone to pay their attention and thanks everyone for coming there. He says finally, the wait is over, my son has arrived. Ranveer comes there and goes down the stairs. Vikrant says time has come to lift the curtain from the surprise. Rhea comes there and calls Vikrant. She says you have given the big party, so shall make it enjoyable too. Vikrant asks what is the plan? She says it is mine. She dances with Vikrant in the party. Others join too. Ranveer and Mamta look at them.

Raghav asks John to call Ranveer and says Rishi is behind Suhani to do her ragging. John calls Ranveer. Ranveer is about to pick the call, when Mamta takes him to dance with her. John and Raghav come to the classroom. Ansh locks the door from outside and smiles. He says now I will see, who will save Suhani. John says we shall go out and see Suhani. They find the door locked and knock on the door. He says someone locked us here and escaped. He says if they are going to do ragging with Suhani. Raghav says if this happens, then the riots will happen in the college, and Ranbir will kill us. Raghav opens the window and looks down.

Vikrant tells that he along with his wife has kept this party for Ranveer. He asks Mamta to call Ranveer. Mamta takes Ranveer to Vikrant. 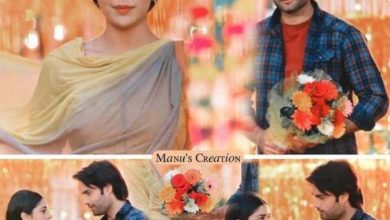