The Episode starts with Ranveer asking Sudha to let him talk to Suhani once. Sudha says ok, I will pray, until then you can talk. She goes. Ranveer apologizes to Suhani. Suhani says it is not your mistake. Ranveer says your Papa came to my house and told that he is searching groom for you, and resigned from his job.

Suhani says he has resigned the job. Ranveer asks if he wants to marry the guy of her father’s choice or want to study and fulfill her dream. Suhani says my dream is equally important to me, and says after my dream, if anything is meaningful to me, then its you. She says I can’t think of marrying someone else other than you, nobody can take your place.

Ranveer looks on emotional as she holds his hand and expresses her feelings. She says I don’t know what to do. Ranveer says I just want to hear your decision, whatever I have to, I will do. Suhani says we will marry only with our families wish else no.

Ranveer says now this responsibility is also mine and asks her to go home, and not to take any tension. He leaves. Sudha comes to Suhani and keeps her hand on her hand.

Ranveer comes to Mamta and says you have to do something for me, and you shall not refuse. Mamta asks him to say. Ranveer holds her hand and takes her out.

Sudha and Suhani come home, and see Ansh and Asha sitting there. Rakesh says see who has come. Sudha greets Asha. Ansh greets Sudha. He says whatever happens, it is not Suhani’s mistake. He says Ranveer is a big dramebaaz, you gave him Suhani’s responsibility and got behind her forcibly.

Suhani tries to speak, but Sudha stops her. Asha says I can understand your pain Sudha ji and says don’t worry, Ansh and I are with you. Kamini says due to people like you, we have trust on humanity. Ansh says if Ranveer does any drama, then I will handle him.

Rakesh thanks Ansh and Asha and says I respect your feelings, but forgive me, I have suffering for giving my daughter’s responsibility to Ranveer once, now I will not do the same mistake again, my daughter is just my responsibility. Sudha asks Suhani to keep the cups.

Suhani picks the cups from the table and is about to keep them, when she sees Ranveer and Mamta walking in, and drops the cups from her hand and it breaks.

Everyone see Ranveer and Mamta there and gets up. Suhani greets Mamta. Dadi, Sudha and Kamini greet her. Rakesh says yesterday I requested you all to keep your son away from my house, and inspite of that, you brought him here. He says I request you all and requesting you to take him away from here.

Mamta says please, don’t fold your hands, if it was not important then I wouldn’t have come here, but the matter is about my son. She says Sudha ji…Rakesh calls Sudha. Dadi stops him. Mamta tells Sudha that her life revolves around Ranveer, and that’s why she has brought her son Ranveer’s alliance for Suhani.

She says I will not lie and says in my family, nobody will agree for this alliance except my sasur ji and me. She tells Rakesh that he knows that she don’t speak up infront of Vikrant ji, but the matter is about her son, and she is sure that her son will keep suhani happy and will not let tears come in her eyes.

She says even Suhani loves him a lot and both the children have proved their love. She requests him not to ruin their loves for his stubbornness, and give their happiness to them.

Ranveer shows the marriage invitation card to Rakesh. Rakesh looks at Mamta and takes card in his hand. He tries to tear it, but stops. He tells Mamta that if she wants her respect to be in his heart all life, then take your son away from here, very soon.

Ranveer looks at Rakesh. Ansh comes to Ranveer and says you might have heard what Uncle has said. He says I won’t let you force him and asks how dare you to get the card printed without his consent. Ranveer holds Ansh’s tshirt and asks shall I give you reply here for my courage, or outside.

Mamta asks Ranveer to leave him. Asha stops Ansh. Ranveer asks him to stand quietly and says here, two families are talking, who are going to be one, and I don’t want anyone’s interference in this. He tells Rakesh that your daughter agrees for this alliance, and this alliance is not my stubbornness, but both Suhani and my consent is there for it, and we want your permission.

He says I promise, that this marriage will not happen without your permission. Rakesh says I will never give my permission. He says this guy were against my daughter’s wedding due to her dreams and today he himself got the wedding cards published. He says your son.

Ranveer says I am not hurrying up for marriage, and says you are doing this. He says you didn’t see the card properly and says I have left the time and place vacant, and says whatever you decide, the marriage will happen after 1 year or after many years, but my name will be with her always.

He says I want Suhani to be the best doctor and says there is one person, and even after marrying him, she can fulfill her dream and that person is mine. Dadi nods yes. Ranveer says even you can’t snatch this place from me and says I will wait for your approval, and says I trust that you will agree if not today then tomorrow, as I know very well, that there is nothing important for you, than your daughter’s happiness.

He says I will leave now. He takes Mamta and leaves. Ansh gets angry. Asha stops Ansh. She tells Rakesh that they will leave now and says we are with you always. Rakesh thanks them. Asha and Ansh leave. 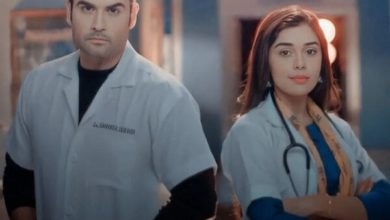 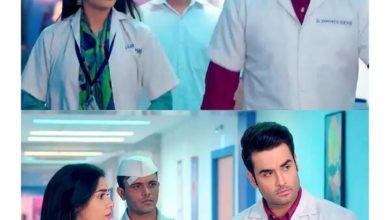