The Episode starts with Angad going to get the ball. Jasmin hides. Angad sees the ball and bends to pick it. Jasmin leaves. She says I got saved, Tejo is happy with Angad, where is Fateh. Sharma thanks Fateh. Fateh asks how can I rest until you get fine. Tanya says Jai, come with me to the storeroom to get blankets. Sharma asks him to go. Fateh goes. Angad meets Varun and introduces Tejo. Varun says Sharma got a heart attack. Angad asks what. Varun says Tanya told me that Sharma is at home now. Angad says handle here, I will go and meet him. Tejo says I will also come. Tanya says lift me, I have to get my personal stuff. Fateh says I will get the stool. She says is this decency or attitude, I will see, till when does he get saved. Jasmin comes home and drinks water. Tejo appears and asks what happened, why do you look worried, didn’t you like seeing me happy. Jasmin says yes, you snatched my roof and stayed happy with Angad, I will snatch your roof. Tejo says you know snatching well, you had gone to Canada, why did you come back. She laughs. Jasmin throws the water at her. She says I won’t let Tejo stay happy, she has no right to stay happy. She makes her wound bleed and says I will make Tejo’s life hell.

Tejo asks Angad to be careful. Angad says sorry, I have to be with Sharma uncle. She says we are going there. He says I wil take a shortcut. The car stops. He checks the car. He tries to start the car. He says don’t know what trouble happened. She says we will take an auto or taxi. He says we won’t get it here. He calls Tanya. Tanya asks Fateh to get her phone. Fateh sees Angad’s call. She says answer it. He asks how shall I answer. Sharma says it might be an emergency, answer it. Fateh thinks. Tanya takes the call. Angad says our car broke down on the way. Sharma asks what happened. Angad says I m upset, no one called me. Sharma says I m fine, come to me and make me laugh, get Tejo along. Angad says Tejo is with me, I m waiting for some taxi. She says our new driver Jaideep will pick you. Angad says yes, I will send the location. Sharma asks what’s the problem, go, how will you know them. Tanya says I will tell him. She shows Angad and Tejo’s pic and says get them. Fateh leaves. Angad says its here. Fateh wears a mask. He stops the car. Angad and Tejo sit in the car. Tejo’s dupatta gets stuck in the car. Fateh hands it over to her and sits back. He drives. Tejo closes eyes. Fateh looks at her. Angad asks him to play some song and make Tejo’s mood better. Fateh plays a song.. Dilbar mere… Angad sings and dances with her. Fateh drives. Angad says you have smiled. He says Jaideep, you made her smile, your and Tejo’s music taste match. She asks how much time will it take. He coughs. Angad says maybe 10 mins. Fateh thinks I m hiding my face from Tejo because of Jasmin. Jasmin takes a disguise and comes to Angad’s house. Babli says we don’t want anything. Jasmin says I m from ministry of home affairs, you work here, this scheme is the best for you, govt. is giving 25 lakhs to home workers for free, house is good, is Sir here. Babli says no, he went out, come, we will go inside and talk. Angad says take medicines, I m upset, Tanya didn’t call me. Tanya says sorry, I was worried. Fateh sees Tejo from far in his phone. Tejo says tell me if you need any help. Sharma says you got a right wife.

Babli says Angad kept us as family. Jasmin asks why, isn’t he married. Babli says he is engaged to Tejo. Jasmin asks is she his relative. Babli says no, she came from other city, Angad loves her a lot. Jasmin thinks is Tejo also in love with him. Angad says anything could have happened. Sharma says no, Jaideep was with me, he saved me. Angad says we should thank him, where is he. Tanya asks servant to call Jaideep. Babli shows Riya’s room. She says Riya is here because of Tejo. Jasmin asks where would she live then. Babli says her Nani wants to snatch her, but Angad won’t let it happen. Servant says Jaideep has gone to the hospital to take Sharma’s reports. Sharma says he is responsible. Angad and Tejo praise him. Sharma says he has some problem, he has hidden some pain in his heart. Babli says we don’t know, but Nani doesn’t want Riya to stay with Angad, Angad is really nice. Jasmin says I will leave now, I filled the form, card will come home. Babli says fine. Jasmin hides. Tejo says Riya’s tuition would be over. Angad says sorry, you can call me. Jasmin takes Tejo’s pearl necklace. Angad and Tejo leave. Fateh hides and looks on. Jasmin breaks the necklace. She sees a toy and says you have lived with peace, I know how to ruin the peace, you can never stay happy. She damages the doll.

Precap:
Jasmin says this time, I will snatch your happiness. She goes to Tejo and Riya. Tejo looks for Riya and shouts. 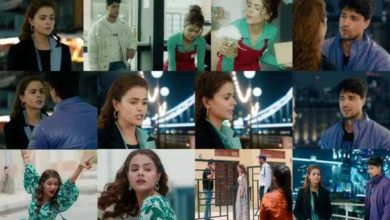 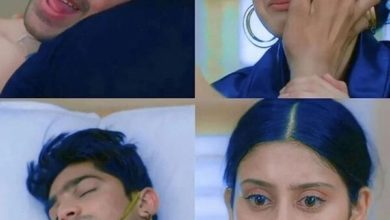 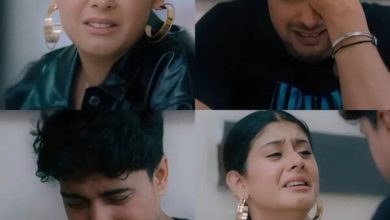 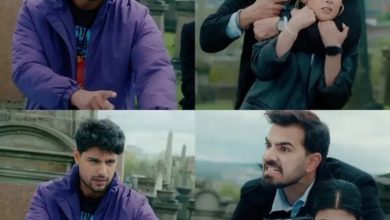