The Episode starts with Tejo thinking of Fateh. She thinks of Jasmin’s words. Candy stops Fateh and says Tejo isn’t eating food, why so, you are her friend, you make her eat the food. Jasmin gets laddoos for Jass. She says I have a good news. Jass says you also eat then. She says you eat. He says eat… She eats. He asks her to tell the news. She says its proved now that Tejo and your marriage is legal, Fateh and Tejo’s marriage is illegal. He says wow, it means if Tejo does drama to come to me, then I can file a case on Fateh that this man isn’t letting my wife come to me. Jasmin looks at him. Fateh knocks and comes in. Tejo says go from here, leave if you care for me. He says I know your pain, its not your mistake, no one could even touch you when I m there. She asks what’s our relation, relation of heart ended and now legally also. Jasmin asks why are you bringing Fateh in between. He says Jasmin, I m fire, don’t play with it. She says you don’t say nonsense, focus on Tejo, I will see Fateh, I m going to marry him in some days. Tejo says we have no relation, please leave. Jass asks just these bangles for this work. Jasmin says I know it won’t be enough for you. She gives a diamond necklace and says it will be worth 5-6 lakhs. She recalls going to Gurpreet’s room and stealing a necklace. She says you do anything now, make Tejo away from Fateh and my life. Tejo says I don’t want your concern. Fateh keeps the plate there and turns to go. He recalls of their moments. She cries. He looks on. He leaves.

Jasmin comes and looks on. She smiles. She stops Fateh and hugs him. She says I know you are much worried for Tejo, but I think you should give her some space, she will remember everything we did, you married her and left her for my sake. Biji asks Fateh to come, everything will be fine. She asks Mahi to call Tejo. Jasmin asks why. Biji says she will do puja with Fateh, married couples do the puja. Jasmin says but they aren’t a married couple, how can she live here when the marriage is illegal. Gurpreet says Khushbeer kept her as his daughter. Jasmin says we know it, but Jass can blame Tejo badly, she can say that she has a husband but staying in a stranger man’s house. Nimmo smiles. Fateh asks Jasmin to stop it. Jasmin says she is my sister, but we can’t deny the truth. Nimmo taunts. Amrik asks her to think and talk. Jasmin says its fine, I will sit in the puja, I m going to become Fateh’s wife. Dada ji says stop, you didn’t become his wife yet, sit with him in the puja after that. Jasmin says Tejo is lucky, everyone is with her, you scold me. Fateh says you talk such things. She says yes, but did you think of the reason, everyone thinks I m bad, because I love you, don’t worry, I will support you, marry me, it will solve all the problem. He asks how. She says Jass can’t tell that Tejo was staying with her ex-husband, I mean you and Tejo don’t have any husband and wife’s relation, you know Jass is so mean. She hugs him and says trust me, Tejo is my sister, I feel bad seeing her, I want to free her from Jass, we have to marry, you also want Tejo to stay happy in her life.

Tejo gets a call. The guy says I m Manpreet, I think I won’t pass, my dad will kick me out of the house, I won’t live, its better that I die, I m over the college terrace right now. She says no, you won’t do anything such. Jasmin asks where are you going. Tejo says I m going to college, a guy is trying to commit suicide, tell Papa that I will come soon. She leaves. Jasmin calls Jass and says Manpreet aka Jass, Tejo left, you did good acting. Driver stops the car. He says some car might have broke down. Khushbeer asks where is Tejo, call her, lawyer has sent papers. Gurpreet asks Simran to call Tejo. Simran says she isn’t in her room. Tejo says its fine, I will go, college is nearby. Jass pulls her inside his car and leaves. Khushbeer asks Amrik to look outside. Jasmin says she isn’t outside, she went out in a car. Jass laughs and says Tejo ji… Gurpreet says I m scared, if Jass…

Khushbeer says don’t raise the tension, children don’t listen. Amrik says Tejo isn’t answering. Jass asks Tejo to see the unique beautiful setup. He asks how is my surprise. Tejo says you aren’t doing right, you know the punishment for kidnapping. He says this is my style, if I texted or called you, would you come here to have wine, never. She runs. He catches her. He says you didn’t understand it, professor Tejo, you are my wife, taking wife anywhere isn’t kidnapping, call the police, I will prove that you are my wife, I can take my wife on a date, its not a crime. She says I won’t get scared of your threatening. He says Khushbeer will be worried for you, sit, please sit, I m short tempered, you know, relax, lets have some wine, have the cake and pasta, I could have gone to your house if I wanted, I love peace, I have nothing to do with Fateh and Khushbeer, have the wine, tell me, what did you talk to mum and dad, when are you coming to Sasural. She says I know you didn’t come back for me, you want money, right. He says right, you understand me, I will get money, who said I don’t want you, why would anyone leave an intelligent earning wife, I want revenge, you and your army ruined me, my mum is in jail because of you, I want my respect and mum back. Tejo says you think she will come back, she is paying for her deeds. He throws a bottle and asks do you think I m a fool, my family got ruined and you are enjoying with a stranger man. She shouts Jass and raises hand. He twists her hand. She cries.

Precap: Tejo is back home. Fateh is angry and says if Jass comes there, then he won’t go back on his feet. Just then Jass enters dancing with band baaja and with police. Fateh looks on angrily. 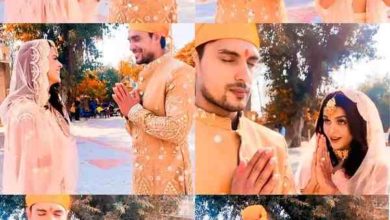 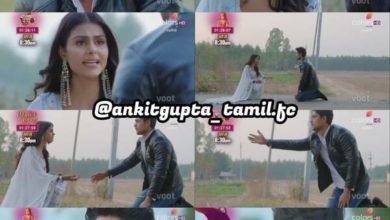 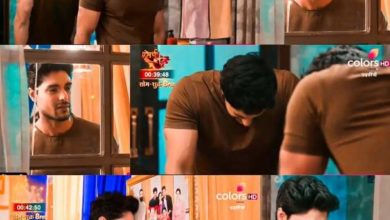 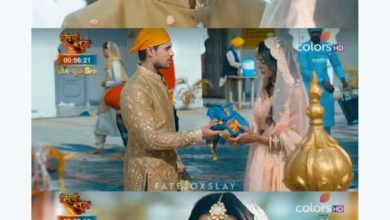