The Episode starts with Angad going to meet Tejo and Riya. Tejo asks how can you be so careless, that you came here. Angad asks what did they say. Tejo recalls. He asks what do they want from you, are they troubling you. She says no, they came to India for some days for work, they will go back soon. He thinks thank God, Fateh didn’t say anything. Fateh scolds Jasmin. She says you should have told the truth to Tejo, you said you will not let Tejo know, you got stuck, so I came to help, did you go after her intentionally. She sings Tere chehre se….

Fateh says shut up, I m watching your every move, so be careful. He goes. She says you be careful, you have stepped on my foot, this Naagin will bite you now. Tejo recalls Fateh and thinks Fateh is in India and didn’t call the family. Angad thinks Tejo will understand everything and then leave me, she will get happiness with me, I should fulfill the marriage dream soon. Fateh says she was with me and I couldn’t see her well. He thinks of Tejo. Tejo thinks of Fateh and cries. Mann vich halla halla….plays…

Fateh says why did Jasmin come here, I think this is my punishment, I had hurt everyone because of her love. Tejo sees Angad cooking. She asks him what is he doing, he should rest. He says I should make this. She says talk good things, I think wound is on your mind. He says wound is on my heart and mind is on place, I got a wake up call, I should not delay more. She says go and take rest, I will make halwa and thank baba ji. He says you want to have all the good deeds, I will also come and pray. They go to the Gurudwara. She says you are smiling a lot. He does shayari. She laughs. He says the day is good today, because you have worn by fav colour. Fateh also comes there.

He prays for Tejo. Tejo thinks something is wrong with Fateh, please take care of him. Angad also prays for Tejo. Angad holds her hand and says marry me. She says don’t joke at least here. He says I m not joking, I swear, marry me, the day is auspicious, we will make this fake engagement into a real marriage, we will start a new life.

He holds her hands. She goes away. Fateh is outside the door. Tejo leaves. Angad follows her. Fateh turns to see them. Angad says don’t feel bad. Tejo asks where did I make a mistake in saying that our relation is fake, we have friendship, you know I did this for Fateh and Jasmin, we were never in this, you always stopped me and said everything will be normal, we will be out of this relation, I want to clear one thing, I just wanted your help, not any relation. Fateh prays for Tejo. Angad says I understand that you don’t want to think of marriage, but you miss a family, I have seen it, you love Riya, you care for me, I decided to spend my life with you. Fateh comes out. He sees Angad and Tejo in the mirror. He turns and sees them. He goes ahead. Angad says fine, you don’t want to marry, I m ready to stay as your fake fiance. Fateh thinks fake fiance. Angad says I didn’t like Jasmin insulting you in the fair, I want you to move on and show them, I want to help you, I m not hurting your self esteem, I really love you, I love you, Riya loves you, we will be a perfect family, you deserve this. She says please, I wanted to get your help and move on, but I didn’t wish to get rid of my love, that’s for Fateh. Fateh hears this and looks on. She says for me, love doesn’t mean achieving. Fateh holds his head.

She says Fateh isn’t with me, but I feel him, its enough for me. Fateh cries. She says this feeling is complete that no one else needs to come in between, its true that I don’t want him back in my life, but he won’t leave from my heart, try to understand, I just love Fateh. Tu meri jaan hai….plays…. She says such love that is free from the bond of winning and losing, when I love someone else, then how can I love you.

Precap:
Angad hugs Tejo and says I love you a lot, I will take care of you. Fateh says Tejo loves me a lot. Angad says I have to kill that Fateh first. 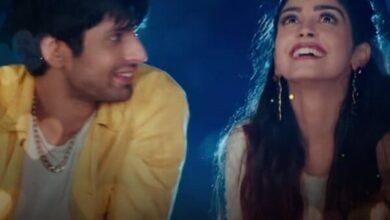