The Episode starts with Tejo asking what are you seeing like this, leave me. Angad drops her. She falls. He says you have asked me to drop you, sorry, anyways, we have water facility. Angad holds the water pipe. Tejo washes off the dirt. He asks are you fine, are you feeling cold. He asks Rajat to get a shawl. He makes Tejo wear it. He says go home and change, I will sign the papers and get it, don’t worry. He asks Rajat to drop her.

Tejo comes home and sneezes. Rupy and Biji ask what happened. Tejo says its a long story, I will tell later, I want medicines. Satti says I will make tea. Rupy says I know when she sneezes much, she gets fever, I will call the doctor. Angad calls her. He says why aren’t you answering. He thinks was the prank too much. Doctor says its normal flu, you will be fine in 3-4 days.

Fateh comes home. Khushbeer asks where were you all day. Fateh says I had personal work. Khushbeer scolds him. He says Jasmin is making you do wrong. Fateh says don’t blame her always, Tejo will handle the work. Khushbeer says yes, she will handle, she is ill, you can call her and ask how is she. Fateh says she doesn’t want me to call her, I m not her husband, its not right to interfere in her life. He goes. Khushbeer says he lost his mind. Jasmin says wow, I love this lahenga, its lovely. Fateh comes. She hugs him and says I like this a lot, how do you know I like this lahenga. Fateh says those who are close to heart, we know everything about them. She says thanks, I love you, I was thinking something. He thinks to call Tejo.

She asks what are you thinking. He says sorry, I was tired, I will have a sprint and come. Jasmin says go, when your mind is fresh, then the things will happen well. Fateh goes. Simran thinks she is so selfish, she can’t see his pain, both the sisters are so different. Fateh comes to meet Tejo. He thinks what to do, don’t know who is she.

He goes upstairs. Angad asks Tejo not to say no. Fateh looks on. Tejo says no. Angad says you may catch cold, drink the kada and bid away the cold. Angad makes Tejo drink it. She says its bitter. He asks shall I mix cold lassi in it. She says good idea. He says forget it, drink, do you want to get fine or not. Fateh recalls Tejo’s words. He comes downstairs. Satti says you here… you and Tejo have no relation now, you have no reason to come here, Tejo is trying to start a new life, let her try. Fateh leaves. He cries.

Tejo says you got worried for a colleague. Angad says I think kada was very bitter, so you are talking bitter things, come on, you broke my heart. She says sorry. He says my kada is the best, I take kada for anyone who is ill. She asks do you take it to all the employees’ place. He says it depends, if any elderly is ill, I take Chwanpraash with kada, if any young man is ill, I take sugarcane along with kada, if a sweet colleague is ill, then I take a plant with the kada. She says its lovely, but why this plant. He says you will wait for someone when you see this. She asks wait for who? He says flowers. She says thanks for coming, no one can win over you in talks. He says if you get fine and come to academy, then work will start and it will be my profit. She says okay, smart, I will get fine soon, you go soon now, you will get late. They laugh. He says I made you fall in the mud, so you had to get drenched and then fell ill, sorry. She asks him to go. He says if you need anything, I will be here. She recalls Fateh’s words. She says everyone says so, but no one does. He says say and then see, don’t act ill. She smiles. Satti says I got ginger tea. He says Tejo wants me to leave, but I can’t control my heart, I will have it, come aunty, I will tell my kada recipe to you. They go out. Tejo smiles.

Fateh messages Tejo… take care, get well soon. Tejo checks. He thinks what did I do, I hope she didn’t read. He deletes it. She cries. He also cries. He thinks what happened to me, why do I feel this emptiness. He thinks of Tejo and Angad. He thinks no use now, forget Tejo, Angad is taking care of her, its good someone is there to share her sorrow. Angad says this kada recipe is ancestral, I fed this to Tejo, she scolded me. Biji asks him to laugh and make others laugh. Angad says I have to get to work. Rupy says I will drop you outside. Angad jokes and leaves. Lovely says he is a nice man, handsome, educated… Biji says he is good-hearted, he got a smile on Tejo’s face. Rupy looks on.

Jasmin checks the dresses. Mahi says she is trying to take Tejo’s place. Jasmin says come and see the dresses. Mahi taunts. Jasmin says I don’t understand what to wear on reception and mehendi. Mahi says I don’t lie, the truth is, this isn’t needed, no one will come in your mehendi, leave all this. Nimmo comes and says help her in selecting a dress, I will do. She asks Jasmin to wear the black lahenge, it will suit her, matching matching. Jasmin asks how. Nimmo says it will match your heart, its black. She sings and laughs. They go.

Jasmin says I don’t want to spoil my mood now. She throws the dress. Fateh catches it. He lifts Jasmin. She asks what happened. He says wow, you did this shopping, amazing. She says fine, is everything fine, did you freshen up your mind. He says yes. He hugs her. He says marriage happens just once, I will get everything for you. She says yes, I m going to become the bride for the first time. He says we will go for shopping tomorrow. She says no one will come in our marriage. He hugs her and says I can’t wait to marry you and go to Canada. She asks really, thanks, I love you. He thinks of Tejo and cries.

Precap will be added later 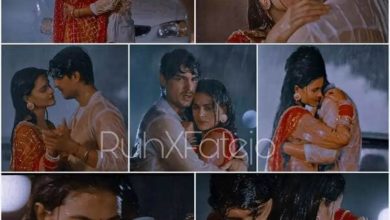 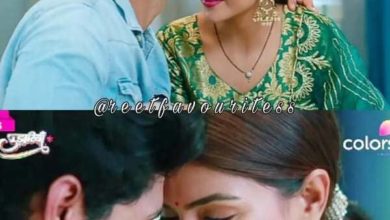