Rudra seeks job from many of his contacts, but doesn’t get job because of Armaan’s threat. Sharda tells Preesha that she is going out for some work. Preesha says she will accompany her, but Sharda refuses to take her along and leaves. Preesha asks kids if they know where Sharda went. They say no. She asks if they feel hungry. They say no and walk away. Preesha feels helpless and hopes Rudra gets a job.

Rudra walks on road disappointed thinking those companies used to run behind hin for a contract, but now they don’t want to give him a job. He sees a requirement for singer at a bar and seeks job. Manager identifies him and asks why he wants to sign at such a place. Rudra says its a long story and he is in dire need of job. Manager agrees and warns him not to show his starry tantrums here.

Sharda meets Pihu outside Khurana house and says she needs some stuff. Pihu says she can take whatever she wants to and orders watchman to let her in. Rudra sings Maine Tera Naam Dil Rakhdiya.. song and gets his payment. He happily returns home thinking he can feed his family now. After some time, Rudra enjoys meal with family when police walks in to arrest Sharda on charges of robbery. Rudra refuses to believe inspector and asks who filed complaint. Armaan walks in and says he filed complaint as Sharda barged into his house and stole stuff.

Rudra gets more angry and Armaan tricked him and took his house away from him. Armaan shows CCTV footage where Sharda takes god’s idols seeing them abandoned. Sharda says she took idols away as she doesn’t want god to be at evil’s house. Armaan says she stole lakhs worth gold idols to sell them and earn money. Rudra gets more angry. Armaan asks inspector to check whole house as Shardas must have stolen more stuff. Police checks and finds only gold idols. Armaan asks police to arrest Sharda.

Pihu enters and stops Sharda’s arrest. She says she gifted these idols to Sharda and shows CCTV footage as evidence. She says Armaan is mistaken and sends police away. Armaan fumes on Pihu and walks away. Pihu apologizes Sharda. Back home, Armaan vents out his frustration on Pihu.

Precap: Armaan threatens Pihu to obey his orders and she refuses. Bar manager asks Rudra to make Preesha dance in front of customers. Rudra gets angry. Manager says he obeyed his boss’ orders. Armaan says he is the boss. 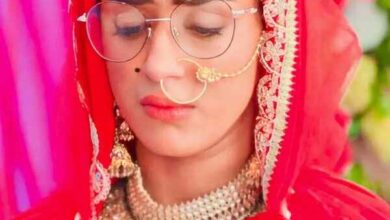