Rudra gets Mishka’s call and asks why is she calling hm. Mishka says she has information which will prove Preesha innocent. He says he cannot trust her. She says she is being punished for her acts and asks if he wants to clean his dead wife’s reputation or not. He agrees to meet her in jail and thinks he cannot trust Mishka but has to clean Preesha’s image, so he will speak to Sharda first.

Arman brings gifts for Preesha’s unborn baby. She asks why did he bring so many gifts. He says he wants to give their baby happiness of whole world. Preesha fumes that its her and Rudra’s baby and she wants to break Arman’s face for calling it his baby. She acts as nauseous and rushes to bathroom. He asks if she is fine. She says its pregnancy symptoms. Once Arman leaves, Preesha acts as getting stomachache and insists guards to bring medicine for her. They hesitantly agree.

Rudra informs Sharda about getting Mishka’s call that she has information to prove Preesha’s innocence. Sharda says they can’t trust Mishka after her heinous acts, especially what she did with Saransh. He says Misha always betrays, but she knows Preesha is his weakness and hence trying to misuse it. She asks him to be careful. He leaves to meet Mishka.

Mishka thinks if her plan works, she will be out of jail. She returns to her jail cell smiling. Reshma asks reason. She says she found a way to get out of jail and explains that Preesha’s husband Rudra is her relative and will get them out of jail, she should tell him that Sania is alive and how she escaped. Rudra meets her and asks what information she has. She asks what will she get in return. He says he knew she wouldn’t change and asks what she wants. She says complete freedom and not just a bail as she knows he will put her back in jail after his work is done. He asks how to trust her. She says Sunil’s girlfriend is here and knows Sunil’s location. He excitedly asks where is she. She asks him get her out of jail first or else not waste her time.

Guard gets Preesha’s prescribed medicine. Preesha acts as having it and asks him to leave. Once he leaves, she takes out medicine and thinks its hypnotic pill which will make Arman sleep and she can meet Rudra after that and inform that she is pregnant with his child. Mishka returns to jail cell and explains Reshma what she did. Reshma says Rudra will not return and must have complained against her.

Constable takes Mishha to jailer and asks what magic she did that Rudra took back case, now she is free to go. Mishka gets out of jail. Rudra walks to him and says he fulfilled his promise and now its her turn, what does she know about Preesha’s murder. Mishka reveals that Sania is alive. He asks how is it possible as postmortem and forensic report is out and Preesha is convicted with her murder, he shouldn’t have trusted Mishka.

She reveals that Sania was alive and Sunil had performed her murder makeup, asks why would Sania call a makeup artist at 3 a.m., its Sania and Arman’s plan to trap him in Sania’s murder. Rudra is shocked to hear that. She asks who called him to Sania’s room. He says Sania. She says Preesha went in and got trapped inside, Reshma informed that Arman has hidden Suni. Rudra asks where are Sania and Arman. She says she doesn’t know, they need to get Reshma out of jail who will take them to Sunil. Rudra agrees to meet Reshma. Arman returns to Preesha who mixes medicine in his juice and serves him.

Precap: Reshma informs Rudra that Arman had hired Sunil to do Sania’s murder makeup. Preesha asks semiconscious Arman if he loves Sania. Arman says he loves Preesha instead and even did a murder for her. Mishha demands Rudra to marry her if she wants Sania’s location. 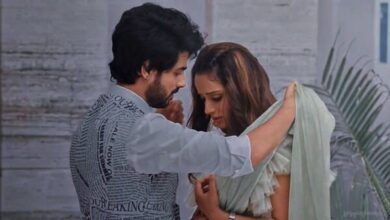