Mishka pleads Venky to forgive him. Rudra enters Venky’s room and is surprised to see her there. Venky acts as sleeping again. Mishka gets tensed thinking Rudra listened her conversation. Rudra asks why she is pleading Venky. She relaxes and says she thought she disturbed Venky. Rudra drapes blanket over Venky and notices a wrist band. GPS returns from pharmacy and says he brought Venky’s medicine. Mishka says she will leave now and walks away.

GPS says he will speak to Preesha as he didn’t since she went to hospital today. Rudra returns to Venky’s room and gets confused noticing wrist band in Venky’s hand which he saw on bed. He thinks of discussing it with Preesha and reaches her hospital to see a man misbehaving with Preesha to redo his wife’s pregnancy test while she says she performed tests repeatedly and his wife is not pregnant. Man is about to hit Preesha when Rudra holding his neck warns him to behave with his wife. Man says he should keep his wife home as she doesn’t know anything. Rudra says any doctor would say same. Man continues shouting. Rudra tapes his mouth shut and asks his wife to speak or else her husband will continue misbehaving with women. Lady drags her husband from there.

Sharda calls pandit home to find out Mishka and Param’s wedding muhurath. Preesha’s assistant takes leave, so she asks Rudra to be her assistant today. He happily agrees. Women patients get happy seeing rockstar Rudra and flirt with him while Preesha checks them. Serial’s title track plays in the background. He feeds food to Preesha and massages her while she is busy in her work. After her duty hours, she thanks him for being her assistant. They head to GPS’ house to meet Venky.

Preesha shows family photos to Venky. Venky asks her about her and Rudra’s love story. Rudra signals her to go ahead. She says their love story is too long, she will describe it later, they had many hurdles, but are together due to destiny. Rudra says same. Venky says it doesn’t take time to change destiny by others. He asks about her family members. She says she has a cute son and a MIL. He insists to see their pics. She shows it. He sees Mishka asks asks who is she. She says she is Mishka who like a family member and even she got a very good life partner Param, is engaged.

Pandit finds Mishka and Param’s wedding muhurat after 1 week. They both get happy. Mishka tells Sharda that she will give this good news to Rudra. She calls Rudra and informs him same. He informs Preesha that Param and Mishka are marrying in a week. Preesha says its good their wish is fulfilling so soon. Venky hopes to attend their wedding. Mishka thanks god that her wedding is fixed soon and remembers bringing panditji to fix her wedding muhurath after a week. She thinks Venky can get well soon and may pose a threat to her, she will lose a good life partner and even Rudra and Preesha will hate her, so its better she marries Param as soon as possible. Rudra and Preesha return home and say they are very happy for her. Rudra calls GPS and Venky and says they will also be part of her wedding and will stay with them her wedding completes. Preesha says even amma will join them tomorrow.

Rudra brings new clothes for Preesha and says his wife should look good in Mishka and Param’s wedding, so he brought designer clothes for her. She happily kisses him and asks if he selected dresses, remembering him gifting a shiny sari last time. He says he knows she doesn’t like shiny sari, so he ordered designer to select sober ones. She gets romantic. Mishka enters Venky’s room and nervously asks if she remembers him, she said sorry to him in his room. He nods yes. She asks if he forgave her. He nods yes and extends shivering hand congratulating her.

She holding his hand thanks him for forgiving her biggest mistake and proving that she is Preesha’s brother. Once she leaves, Venky acts normal and showing his evil side says he doesn’t know how Preesha is, but remembers what she did with him; he will never forgive her and will punish her brutally; he has a planned a surprise for her and she should just wait and watch. 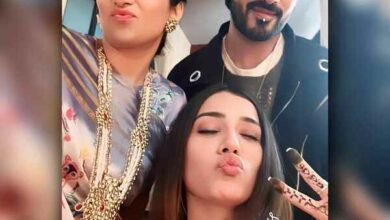