Manjiri says something happened. Harsh says its a hospital, not a paan shop, you are a doctor, you have responsibilities. Abhimanyu says I know, there are no surgeries. Harsh says fine, have fun. Neil says I m also going with him. Harsh says good. Akshu thinks I will miss you all. She says I have made chocolate kachoris for you all. Manish asks why did you make sweets, are you going out for a long time. He says you are going for 2-3 days. Akshu says I didn’t think much, I have made this for the trip. She asks Aarohi to taste first. Aarohi takes the kachori. She thinks Akshu will go forever, I will have it. Akshu smiles.

Abhimanyu’s sister comes and says you are going to the festival, you can get my Bhabhi there. They tease Abhimanyu. Anand asks everyone to get to work. Abhimanyu says love at first sight doesn’t exist. Manjiri says one who is true at heart, true love finds him. He hugs her. He leaves. Neil asks Abhimanyu to go on his bike, he will bring the car. Abhimanyu thinks I m going to get away from that stranger’s voice. Suwarna says we will keep a puja, we all united after many years, we will also go for shopping, I will buy sarees of Akshu’s choice.

Akshu recalls Aarohi’s words and cries. She eats the spicy chutney. Manish says you know its spicy, see you are crying now. Akshu gets hiccups. Dadi hugs her and pacifies. Dadi sees the bags and cries. Kairav asks what happened. Dadi says if you all go, then what will I do alone with these oldies. Suwarna says she means about Manish. Aarohi says okay, we will come back in 2 days. Vansh says we will make video call also. Dadi says I got an idea, Suwarna pack our bags, we will also go. Akshu thinks how will I go from there if she is along.

They leave on the trip. Vansh asks Aarohi about her internship. Aarohi says I will come back and decide. Kairav says what will happen if you have internship with Mr. Birla. Vansh says he will apologize to her. Kairav says you are super intelligent. Suwarna is driving. Dadi is in the front seat. Dadi says we will play antakshari. Kairav says its boring. Dadi says fine, you all get busy on the phone. Kairav says fine, we will play. Abhimanyu passes by on his bike. The rose from his pocket falls over Akshu. Aarohi thinks is that him. Suwarna stops the car. Aarohi gets the rose. Suwarna says we just came till here, we will go on satsang now, you all go. Dadi says you go to ashram, I will go with the kids, see how they got scared, enjoy the picnic. Suwarna asks Vansh and Kairav to take care of their sisters. Vansh says I will drive the car.

Akshu says wow, its beautiful. Aarohi says its just normal, I don’t believe in magic, but logic. Akshu says magic will happen. Abhimanyu is also there. He sits to tie the shoe lace. They don’t see him and pass by. Kairav says your hatred for Akshara isn’t right, don’t do anything here, it hurts us. He asks Aarohi and Akshu to stay together. He goes with Vansh. Aarohi says I don’t want to share the bed with you, I m sharing the room just because of Kairav. Akshu says its matter of three days, then I m going, please forget everything.

Aarohi says okay fine, just three days, our relation won’t be left after that. Akshu cries and goes out. Abhimanyu lies in the grass. He hears the dhol singers. He stops them and asks are you also hearing a girl singing, or is that just me. The men say we can also hear it. Abhimanyu runs to see. He sees Akshu sitting far away. He runs to her. She sings Lagjaa gale…. He sees Akshu and hears her song. She cries and wipes her tears. She turns smiling. She slips back. Abhimanyu holds her. She closes her eyes. Os ki boondein…plays…. He asks are you fine. She says I have seen you somewhere before. He says I also feel so. She says thanks, if you weren’t here today… He says maybe I m here for you.

Precap:
Abhimanyu drops Akshu. Aarohi says Akshu is simple, I like to be number one. He says being simple is tough. He meets Kairav and Vansh. They all sit to have lunch. Abhimanyu tells a song. He says why do I always see that girl’s face, did I go mad. He sees Kairav there. 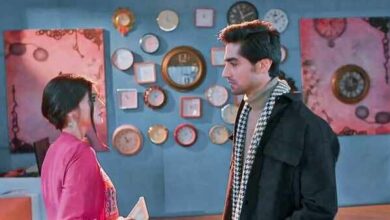 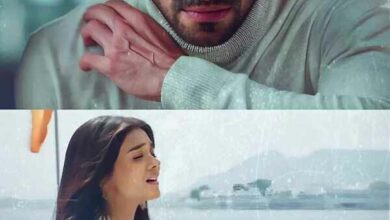 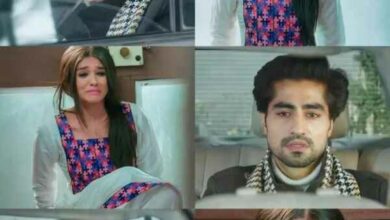 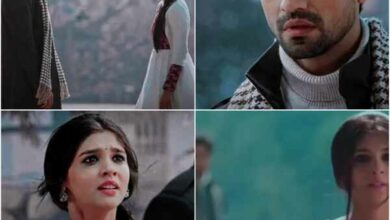