The Episode starts with Goenkas coming to meet Akshu. She says I was scared. Anand and Harsh come and meet them. Manish thanks them. Aarohi says Abhi said Rohan took care of you. Rohan asks Abhi to sign the discharge papers for Akshu. Abhi asks why, I will decide on this case. Rohan says Anand and Harsh decided this, I m just doing my work. Abhi says sorry. He signs the papers. Rohan asks won’t you meet her. Abhi says no.

Akshu is brought home. Everyone thanks Anand and Harsh. Anand says Akshu is like our daughter also, the credit goes to Mahima and Abhi for saving her, her treatment will happen well, Aarohi is here, I hope she gets good care, she will recover soon. Aarohi says sure. Harsh praises Aarohi. He says she is a huge asset to Birla hospital, she will become a top doctor like Abhi, what about the marriage, Akshu will recover, marriage is also an imp decision. Anand says he is right, Manjiri and Mahima aren’t here.

Harsh says we shall keep the marriage soon, Manjiri will do the kuldevi puja and come, we can keep haldi tomorrow in day time and then marriage in evening. Akshu worries. Manish asks how can this happen so soon. Harsh says everything will be fine. Dadi says Harsh is saying right, there is no good mahurat, we will do as Harsh says, we will give Akshu rest today, she will be ready to see marriage tomorrow, so its decided, haldi and marriage tomorrow. Aarohi smiles. She sees the blood in the drop. Anand asks Akshu to open her palm and relax. He asks her to sleep.

Aarohi thinks I will tell her sorry tomorrow. Neil dances. Abhi asks did you go mad. Neil says you are getting married tomorrow, there is no time. Abhi gets shocked. Neil says congrats for making your life’s biggest mistake, lets dance. Mahima asks how is Akshu. Anand and Harsh come home. Anand says she is fine. He goes on a call. Harsh says Akshu is fine, everyone will be busy tomorow, we decided to keep haldi in morning and marriage in evening. Anand says yes. Abhi asks when is mum coming. Harsh says she will come till marriage. Abhi says marriage and rasam won’t happen till Manjiri comes. Harsh says Mahima will do the rasam. Mahima says Manjir should be here. He says we follow the rituals, you can do it, don’t make an issue. Mahima says ask Abhi once. Harsh asks Abhi. Abhi goes.

Harsh thinks I can’t tolerate Akshu. Abhi worries. Kairav sees Abhi’s pic on Akshu’s hand. He says what game is fate playing with Akshu and Aarohi. He prays for them. Aarohi sits studying at night. Its morning, Akshu wakes up and asks how shall I let you go, I know I have to get away from you, but I can’t. Aarohi comes and asks her to have kada. She says forgive me, your accident happened because of me, I should have not rushed that day. Akshu says I had questioned you before the accident, answer me, who did you give the money, I may forgive you if you say the truth. Aarohi says I made a mistake, I chose a wrong path to do the right. She tells everything.

Akshu asks why did you lie again. Aarohi says don’t become Dadi, we should be practical, what’s wrong, I got late in filling the form, do you doubt my talent, I will top the class. Akshu says you know you did wrong. Aarohi says I m not wrong, I had to do MD so I gave some money, its not a big deal, its okay. Akshu says its not okay, you lied to everyone, especially Abhi. Aarohi says you don’t dream, but I want to win the world, everything is fair in love, war and my dreams. Akshu says think of Abhi.

Aarohi says yes, we are the best, we will become a power couple, I will go and get ready for haldi. Akshu asks her to see the wedding card and ID card. She says you have lied to Abhi, its wrong. Aarohi sys its not too wrong, I will handle him. Akshu asks if he feels bad then… Aarohi gets a message. She says oh no, exam is today, how can this happen. She calls and asks can the exam date change, my marriage is today, fine, I can’t miss the exam. Akshu worries. Aarohi says I will give the exam and marry also. Akshu thinks she is doing wrong, her intention is bad than my fate, this isn’t right for Abhi.

Precap:
Akshu says Abhi loves me, I love him, should I let this marriage happen. Haldi gets on Akshu’s hand. Dadi tells Akshu about Naira. 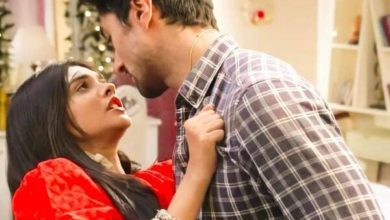 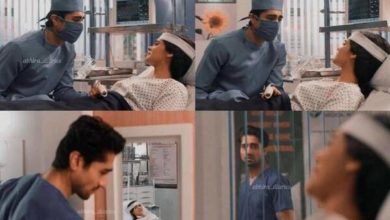 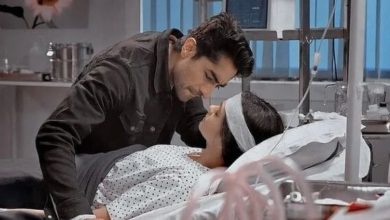 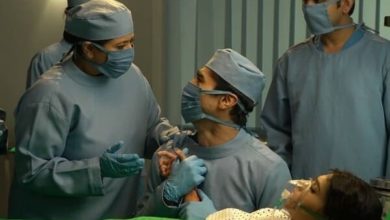