Abhi running to Manjiri. He asks her to open her eyes. He says really sorry. He runs to get the first aid kit. Harsh calls out Anand. Abhi checks Manjiri. He takes the injection and stops. Mahima gives the injection. Harsh asks what happened. Anand says it happened because of stress. Parth says we can give her the saline. Mahima asks does he know it, or should she know. Abhi apologizes to Manjiri.

Akhilesh and Manish play table tennis. He says games make us get rid of stress. Manish says we have a connection with Birlas through Aarohi, I feel we have another connection. Akhilesh says like you and Kartik. Manish says yes, I see Kartik in Abhi and myself in Harsh. Akhilesh says there is some secret between them. Manish says I feel there is some big misunderstanding between them. Akshu hears this and says Abhi’s family has some issues, there is some secret that they behave strangely, I just hope everything gets fine. Neil asks Abhi to drink water, mum will get conscious. Parth asks what was the matter that she got affected. Harsh says just Manjiri can tell us. Anand says let her rest. Mahima says she has a low BP problem, we need to be extra careful. Manjiri worries for Abhi’s marriage. She murmurs. Abhi arranges a puja for Manjiri. He asks Harsh to sit. Everyone sits in the prayer. Abhi prays for Manjiri’s health. Neil says he loves Manjiri a lot. Nishta thinks I will upload the story, Manjiri will get prayers. Parth checks Manjiri. Suwarna asks Akshu to donate the things to the poor outside the temple. Akshu nods. Aarohi comes and says you got forgiven by everyone. Akshu says you talk so bitter, its good that things got fine.

Aarohi says it will get fine when Abhi and I get together. Akshu checks the social media. She gets Abhi’s video. She says Abhi looks upset, I hope everything is fine there, Manjiri isn’t there, something happened to her. Abhi prays for Manjiri. Manjiri gets conscious and says Abhi. She cries and says you did Maha Mrityunjay jaap. He says you taught me. Anand asks what happened. Abhi says I was fighting with Sir. Anand says we will get tests done tomorrow. Harsh says Abhi prepare for the medical camp. Abhi says I won’t go. Manjiri says poor kids need you there, go. Anand says its imp that you go. Abhi says sorry mum. She says my plate fell down, I couldn’t do the puja at the temple. He says I will complete your puja. Dadi and Aarohi go to donate the things. Akshu goes to pandit and asks him to pray for Manjiri Birla. Abhi comes there. They pray for Manjiri. He hears pandit taking Manjiri’s name. Pandit gives the plate to Aarohi. Abhi sees Aarohi. Akshu is with some kids. Aarohi thinks Akshu would have given this chadava. Abhi says Aarohi is praying for mum. He says thanks. He sees her gone. He says I will say her thanks in the hospital.

Its night, Aarohi says its my first surgery under Dr. Abhi, I m so excited. She gets the message, Abhi will be leaving for Shivir, Dr. Uma will be heading the surgery. She says Abhi will go to Shivi. Akshu asks can I come along and help you. Vansh says yes, of course. Aarohi says I m not a loser, I will prepare a PR plan, Harsh will send me to Shivir, Abhi will be with me, its a good chance to get close to him. She calls Harsh.

Its morning, Abhi asks how are you feeling now. Manjiri says I m fine, I did the puja also, you have to go and treat the poor, I promise I will just take rest, Aarohi has sent medicines for me, you go, you don’t talk about those things again. He says sorry. She says I m scared of your anger, no one knows about it, I will pray that you get peace in this Shivir, you need a break. He says bless me, break doesn’t suit me. She says you promise me, you will think about marriage, you love Akshu, we had tried, we can’t force someone. He says yes. She says we should spend the life with one who loves us, not the one we love, its my dream to see you becoming a groom, I will get peace when you get a partner, loving someone isn’t bad, its not right to waste time after someone, you have to find a way, I want you to think about Aarohi once, she likes you, she is a doctor, you both can understand your work, if anything happens to me, then what will happen of me. He says nothing will happen. She says your happiness is my medicine, promise me. He says I can’t promise, I will try to think. She says its enough for me. He asks her to take care. She prays for him.

Aarohi gets late and misses the van. She says I forgot to charge my phone, they left me here, I will reach Abhi, he is just mine, I will get some lift on the way. She gets scared. She picks a stone. She turns to see. Abhi checks his bike. He thinks what am I thinking now, no I can’t. Akshu stumbles and falls over him. Jaaniye….plays…

Precap:
Akshu says I drive fast, hold me and sit, I m going to the kids’ camp. Abhi says I m also going there. Aarohi sees Akshu at the camp and argues with her. Neil asks Akshu is her moving on thing just a drama. 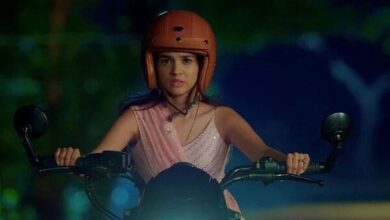 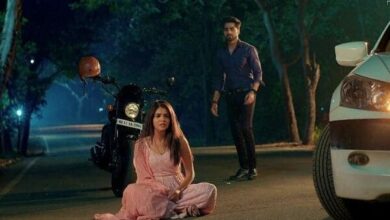 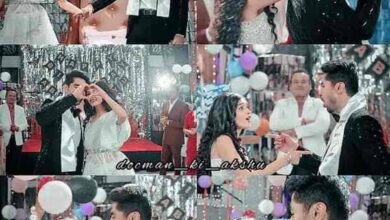