The Episode starts with Parth saying thanks Akshara, I feel light, I want to do this, don’t know what they want me to do, Mr. Bijoria invited us, we all should go. Neil says we will come. Parth asks Abhi and Akshu to come to the party. Abhi is called for his duty. He leaves. Harsh gets the audio message. The man says they are talking about making Parth sit on the chair.

Harsh thinks I expected this from Mahima, I knew she is smart, but I didn’t know she is so opportunist, she has fit Parth in my place, but this won’t happen. Abhi gets a call. Rohan takes permission to leave early. He asks are you not coming in the party, Mr. Bijoria invited me, thanks and I will see you there, I m upset on you. Abhi says wow Rohan, you also get upset, you expect me to convince you. He pities his fate. Akshu sits to work. She says I have to do paperwork, shall I finish the work or go in the party.

Abhi thinks seeing the tag. Shefali asks what’s these clothes. Abhi says I was going to sleep. Parth asks won’t you come in the party. Abhi says I will see. She says we are ready, look at yourself, you aren’t ready, we are sure to take you along.

Parth asks Abhi to change and come. He says we will wait outside, don’t say no, its my orders. They go out. Abhi thinks. Manjiri looks on. Dadi sends an audio message to Akshu. She says silence makes the relation bad, I have sent clothes for the party, do what you find right. Manjiri irons Abhi’s clothes by a steamer. She asks him to go and get ready. Abhi asks her not to touch his shoes. He says you were giving me Gyaan, see what are you doing, the girl who loves you so much, you fought with her, my relation has no love, you don’t let silence come between you too, go and fight her, ask her to fight you, but don’t let silence come in your relation, set your hair. She goes. Abhi gets ready.

Everyone enjoys the party. Girls see Abhi. Girl says who is he who didn’t turn to see us. Abhi says world’s luckiest husband. Mr. Bijoria meets Abhi and asks where is your wife. Neil says she would be just coming. Parth and Neil say Akshu should come to the party. Neil messages Manjiri. Akshu sings a lullaby and calms down a little boy.

Manjiri sings and sings along. Akshu smiles. Manjiri says I m not a therapist like you, but a mum, I can also sing a lullaby and calm him, go and get ready, I got your clothes. Akshu hugs her and goes. Abhi sits alone. He refuses for drinks and asks for water. The man asks what.

Abhi asks for soda. The man asks soda with? Abhi gets angry and scolds the man. He says my wife couldn’t come, maybe she is helpless, I want to have soda with something else but I can’t have it, it will cause indigestion, so what shall I do, shall I not even have soda, if you want to do this with soda, then why do you keep soda, it adds flavour in every drink, what’s its value. The man says I understand, I m giving it.

Abhi shouts then give me soda, only soda. He drinks the soda. He sees time. Rohan comes and says Abhimanyu Sir, you… Abhi says no, I m his twin brother. Rohan says very funny, you look like someone has starched you. Abhi asks him to go away. Rohan says I have to tell you something. Abhi says send voice note, but don’t say. Rohan says fine, voice note, ready…

He says I request you to please patch up with Akshu, the staff is hurt, we aren’t your family, but you both are like our family, I don’t have a GF, when I see you two, I also feel to fall in love, I don’t like when you both fight, fight with us, scold us, don’t fight with her, thanks, I love you. He sends the audio. He says I have sent it, did you get it. Abhi nods. Rohan goes drinking. Parth, Neil and Shefali see Abhi standing alone. Akshu leaves from the hospital. Aarohi comes. Abhi sees her and thinks did Akshu come with Aarohi.

Neil asks didn’t Akshu come. Aarohi says no idea. Abhi says Akshu didn’t come, why.Neil asks Abhi not to go anywhere. Abhi says don’t get adamant, I m going, why are you talking to me today, I m angry. Neil jumps on his back and says I won’t let you go, how much will you run away from Akshu. Abhi says I won’t wait. Neil falls down. Abhi says sorry, did you get hurt. Neil says really sorry. He hugs Abhi.

Neil says so fight is over. Abhi asks when did we fight. Neil says right, we used to fight and patch up this way since childhood, end the fight with Akshu also, keep some patience. Akshu is on the way.

Precap:
Abhi and Akshu dance in the party. Abhi is called for an emergency in the hospital. He leaves. Someone sees Akshu and asks who is she. The other person says she is music therapist from Birla hospital. 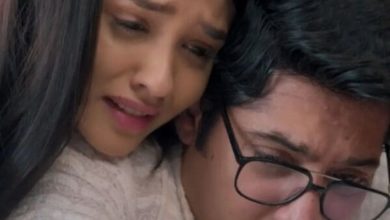 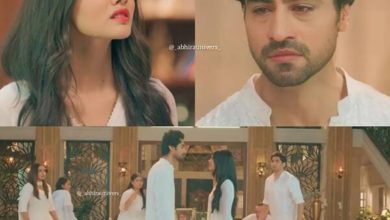 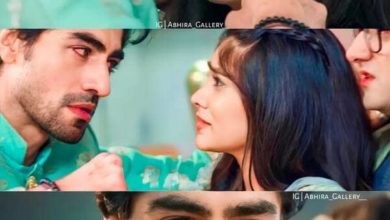 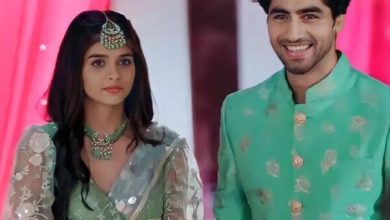