The Episode starts with Abhi saying Dadi is sleeping, I made nurse sit with her, you can have a coffee break. Akshu says I didn’t add salt in your coffee. He says you can’t have much coffee, you won’t get sleep, listen to me. She says you will have acidity. They try to swap the cups. Rohan comes and jokes seeing them play. Abhi says really.

Rohan goes. Abhi and Akshu have the coffee. They hear a boy crying and rush to see. Mahima checks the boy. She asks what problem do you have, let me examine well. The lady asks Akshu to help them, she sang last time and consoled the boy. Akshu says Mahima will treat him. Mahima gets angry on the lady.

Akshu says his body needs your treatment but his mind needs a music therapy, it calms the mind. Mahima treats the boy. Abhi and Akshu hold hands. Akshu sings Ek pyaar ka nagma hai…. Aarohi comes there and looks on.

The boy calms down. An elderly man looks at Akshu from outside. Anand and Mahima leave. The lady thanks Akshu. The boy goes to sleep. Harsh wakes up. He asks Manjiri for water. He recalls Anand’s words. Abhi says as always, well done. The man says I agree, well done.

Abhi says he is Mr. Bijoliya, one of the board members. The man praises Abhi and Akshu. He says Abhi is already our star and now his wife, we need such vision in the management, we have to fill Harsh’s position, I feel Abhi should give it a thought. Akshu asks Abhi to come. Mahima and Anand look on. Mahima says we have to do something for us soon, else we will have no place for ourselves.

Harsh comes to wake up Manjiri. He asks for his medicines and water. She says medicine is in the left side of your drawer, I will ask staff to get water. She calls the staff. She asks Harsh to have medicines and sleep. He leaves. The nurse says patient has a BP shoot up. Abhi checks Dadi. Akshu asks will she get fine. He says relax, don’t get scared. She hugs him. kuch na kaho…plays… She rests on his shoulder and sleeps.

Abhi also sleeps. Its morning, Dadi wakes up and sees them. Manish and everyone also smile seeing them. Akhilesh says they look so cute. Manish says and tired also. Akhilesh clicks their pic. His phone rings. Abhi and Akshu wake up. Manish says good morning. Akshu asks Dadi how are you. Dadi says fine. Abhi asks why didn’t you wake us up. Dadi says you both were sleeping like kids, Abhi let me go home now. Abhi asks her to take care of herself. Everyone advises her to take care.

Dadi says yes, just take me home. Aarohi asks Akshu is she coming home or not. Abhi says I will send the nurse. Akshu says I will go to washroom and come. Manish asks Akhilesh to tell the staff to get breakfast. Aarohi thinks I will tell Kairav, then he will get tensed and interrogate them. Abhi recalls Akshu and his moments. He says will she come home with me. Akshu comes to his cabin.

She says I should talk to him and clear the matter. Kairav and Aarohi look on. She says something is different, I m not wrong this time, its my concern, they were acting to be happy in Saawan milni, you think Akshu will tell anyone, something happened. Akshu asks the nurse to give the coffee to Abhi. She goes. Aarohi says you believe it now, right.

Kairav sees Akshu. She says I m worried for Dadi. He says she is fine. She says I m stressed that she can get unwell again. He says you are hiding a truth from us. She says no, come, everyone is waiting. He asks what happened between you and Abhi, tell me. Abhi says she didn’t come to give the coffee, I wish you come back home.

Kairav says you came home and cried having the chutney, I doubted that time, you stayed upset in Saawan milni, I m sure that something happened, won’t you tell me. She says there is nothing such. She cries. He asks why are you crying, I know Abhi is short tempered, what happened, did he say anything, did he blame you for something. She says no, everything is fine. Kairav asks Abhi, what did you do with my sister. She turns and sees Abhi behind. Kairav holds his collar.

Precap:
Kairav asks Abhi to answer, why is Akshu crying. Akshu says I can decide for myself, don’t tell me what to do and what not. 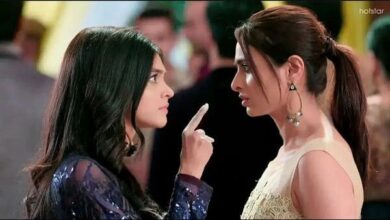 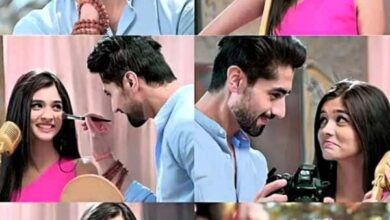 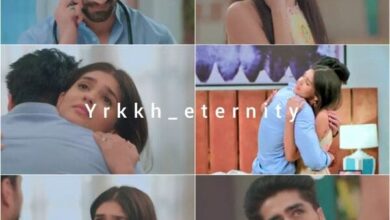 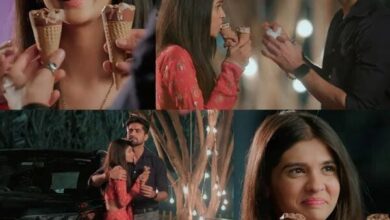