The Episode starts with Akhilesh asking everyone to handle the bangles with care, and also the partner’s wrist with care. He plays the song Bole Chudiyaan… Abhi and Akshu recall their dance on the same song. Aarohi says same song again, is there just one song on bangles. Akhilesh says its trending these days. Vansh says I m impressed. Neil says we will play this song only.

Abhi checks the bangles. Suwarna and Manish argue. He says don’t lower my morale. She says sorry, we will win the competition. Kairav says sorry, I m doing this for the first time. Manjiri says I will make any design you make. Vansh says your size isn’t there. Mahima asks how, see this. She wears a bangle and shows him. Aarohi says I want to come first, hurry up. Neil says okay. Akshu asks Abhi to hurry up. Abhi says you asked me to take more time. She jokes on the design.

Aarohi says if any other team wins, then I will hang you upside down as a bat. Akshu doesn’t give her hand to Abhi. Abhi holds her hand and makes her wear the bangles. Suwarna says its not my bangle size. She asks Manish to change it. Aarohi says I want to come first, stop nonsense and make the set. Neil says even I want to come first. Akhilesh counts down. Akshu gets hurt. He asks them to hide their hands now. He asks Manish not to hide his hands, get up and clap.

He claps and says everyone played well, when I count 3, all the ladies will show their partners’ hardwork. He counts to 3. All the ladies show their bangles. Akhilesh says Abhira is the number one jodi, they have come first, there is no second and third, congrats. Everyone claps. Manjiri says your love is like Radha Krishna. Akshu covers her wound and goes.

She removes the bangles and sees the bangle glass piece pierced in her hand. She says I can remove it, it will get fine. Abhi comes and sees the wound. He asks why didn’t you say that you are hurt. She says you don’t understand me. They argue. He says you do what I ask you not to do, you don’t do what I ask you to do, don’t move, you will be hurt. She says its better than I hurt myself.

Aarohi looks at them and says they are hiding something, its time to pull down the curtains on this drama. Akshu says no one called you. Abhi says I reach you when you are in pain. Akshu says I can’t afford your fees. He says I m your husband, I will treat you for free, I m not a villain that I don’t care for your wound. He treats her. She feels the pain and hugs him. Dil hai ke maanta nahi…plays…

Aarohi asks everyone to come with her, they will go that side and play. Kairav says fine, we shall go there. Akshu asks Abhi to leave her hand. They argue again. They see the family members coming. Akshu and Abhi cutely fight. Manish and everyone smile. Manish asks how did you get hurt.

Akshu lies. Suwarna says Aarohi got us here to play a surprise game. Manish asks what game. Aarohi says leave it, we will go and have the food now. Mahima says we shall leave now. Abhi says come. Suwarna says Dadi is tired, she went to take rest. Abhi says I will check her. Manish jokes. Manjiri says thanks for giving so much love and respect, Akshu come.

Suwarna gives them gifts. Kairav asks Akshu and all of them to come one day. Vansh says yes, it will be fun. Suwarna says get everyone along, we will plan this someday. Akhilesh comes and asks Abhi to come fast, don’t know what happened to mum. Abhi and everyone run to see Dadi. Abhi asks what happened. Dadi says my head is aching a lot. Abhi checks the BP and says her BP is very high, I will inject her, she will be fine. Dadi says no. Suwarna and Manish ask Dadi to take it.

Abhi says its done. Dadi asks done? Abhi asks did you eat more salt. Suwarna says she doesn’t take salt. Dadi says I came here to take rest, I had to gift you the pearls. Suwarna says she got this from Guru ji’s ashram, she wanted to gift this to Akshu and Abhi, so that their lives always have happiness and peace.

Dadi says marriage’s first year is tough, to understand each other, we can’t think of it, but this difference of thoughts, it should not bring difference in heart, so hearts have to stay calm. Manjiri says she is right, many times, relations are left behind, until we realize it, it gets too late, we should hold the relations well. Abhi sees Akshu.

Precap:
Akshu runs to Abhi, and shows Dadi admitted in the hospital. Abhi asks did she get to know our matter. He turns and sees Dadi hearing them. 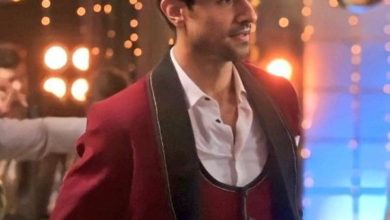 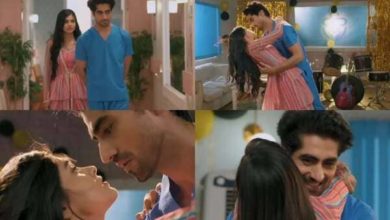 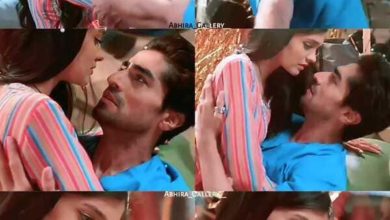 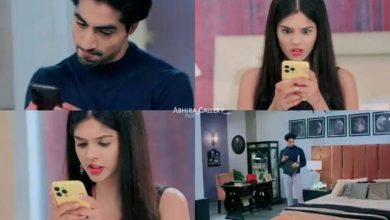