Neelum informs Malishka that the wedding was for one year after which Rishi was either way going to leave Lakshmi, but Malishka was not able to live and forced Rishi who left Lakshmi so now is in the ICU, but if Lakshmi was not in the bank she knows Rishi would not have been saved, she hugs Virender but Lakshmi is shocked hearing this from the corner.

Neelum informs this is why she wants Lakshmi to come back into Rishi’s life as she wants him to live more then to be in love, she only desires that he must be alive, Neelum sees Lakshmi standing in the corner but she steps back before anyone else can see her.

Lakshmi’s uncle is pulling Rano when she insists that she doesnot want her to ruin their reputation, he explains she should let Lakshmi meet Rishi but Rano threatens to yell if he doesnot leave her hand, she is going to yell that her reputation is being taken away as this is what Lakshmi is trying to do, Lakshmi walks past them not listening to anything that Rano is saying, her uncle exclaims that he knows something has surely happened.

The entire family is standing outside when the doctor comes out, Neelum immediately asks about the condition of her son, the doctor exclaims that he is not well and if he does not wake up then it would be really problematic, Neelum and Karishma exclaims he is the doctor so should do whatever he feels like, the doctor replies he has done all that he can but now everything is in hands of Bhagwan,

Neelum enters with the pandit jee to the room, the nurse says they cannot be here because it is not right, Neelum starts fighting with her exclaiming he is her son and they just need to spend some time with him because she is the mother and needs to try so he opens his eyes, the nurse leaves when Neelum requests the Pandit jee, he prays for Rishi and even performs a tilak on his forehead informing Neelum he has blessed rishi,

Neelum sits beside Rishi requesting him to open his eyes since he doesnot let her cry but now should see his mother is calling him, if someone hurts her he is the one to defend her but then why is he himself being the reason that she is crying, she requests him however he doesn’t listen.

Neelum exclaims he never listens to her as she asked him to stay back in the house but he did not listen and even at the bank, she once again pleads that he open his eyes, she starts forcing him when the Pandit jee calls Neelum, explaining that the love of a mother is really powerful but they would need to perform further rituals,

The door bell rings, Neha goes to open it and starts yelling at Lakshmi exclaiming they can hear it even if it is rung once, Rano questions why is she yelling since Lakshmi has even got deaf, Lakshmi uncle questions why is she scolding Lakshmi as he knows that something wrong has happened and it is the reason she is tensed,

Rano exclaims even then why is he being so worried about her, she has been the one to live with him and they lived in poverty but he cares for Lakshmi, he replies he loves her just like Neha and Rano should let her rest.

Lakshmi enters the room with Shalu, she sits down with the wall, seeing her condition Shalu gets really tensed wondering what might have happened so thinks of calling Aayush.

Virender is shocked when the receptionist informs that Lakshmi has been discharged and gone back home, Virender starts breathing heavily when Aayush informs he should not be so tensed since they knew Lakshmi is a fighter so got well but now even Rishi would be fine really soon.

Aayush gets a call from Shalu who asks about the health of Rishi, Aayush inform he is not well but would get better really soon however Shalu must take care of Lakshmi Bhabhi. Lakshmi thinks about what Rishi said to her revealing he can only marry her, she places her head on Shalu lap exclaiming Rishi was not wrong.

Virender is praying in front of the Mandir, he exclaims he forgot his own love after seeing the love of Neelum but is now realizing that he also loves rishi a lot, he slapped Rishi with his own hands but it was because Rishi wronged Lakshmi and so needed to be punished, however Maa knows whatever is in their hearts, he informs Aayush how he feels he doesnot have any strength because his son is fighting for his life.

Malishka questions Neelum in shock who replies that she is going to bring back her daughter in law Lakshmi, Malishka replies that it is her fear as she also knows Rishi loves her, Malishka enters the room when Karishma informs how it would have been better if Rishi had listened to her, Neelum replies it would not have mattered since the Markeshdosh would have followed him, he would have been injured even if he was in the house because Lakshmi was not with him.

Malishka tries to wake up Rishi informing that Neelum aunti has decided to bring back Lakshmi and he knows only he can stop her from doing it, the doctor arrives when Neelum explains he said Rishi needs to wake up within twenty-four hours, so she wants to know how much of that time is left, doctor replies nine hours have been left.

Malishka is with Rishi when the nurse comes questioning what she is doing in the room but she doesnot reply, the doctor also enters asking what is she doing, Malishka replies she is trying to wake Rishi, the doctor informs this is his job so he orders the nurse to take her out of the room, he starts checking Rishi.

Malishka walks out of the room, Neelum sees her from the reception so comes to ask if he woke up and opened his eyes, Malishka says he did not when Neelum exclaims she gave her a chance and now would do what she feels like, if Malishka cannot accept it then can leave, the doctor comes out when Karishma questions about the health, he informs that Rishi’s health has deteriorated even more.

Neelum rushes to leave and bring Lakshmi when Malishka tries to stop her explaining that if Lakshmi comes into that house then she will not be able to enter, Neelum replies she knows but does not have any effect, Malishka’s mother exclaims she waited for this humiliation only because her daughter loves Rishi, what did Neelum think of her daughter, that she is just a girl who came into her sons life but she also has a decision, if Neelum brings Lakshmi then her son can never come into her daughters life, Neelum replies she does not care and her decision would remain the same, Karishma is shocked. 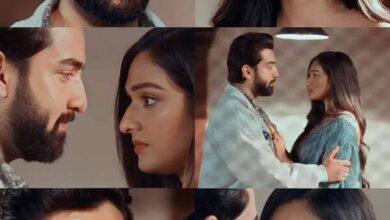