Akshu saying how did I think wrong about Abhimanyu, maybe he used to treat me well that I m Aarohi’s sister, he never told me that he likes me, I was thinking so much. Aarohi happily dances. Kairav comes to Akshu. He asks shall I talk to Abhimanyu and clear it. She says no, I m wrong, I was mistaken, its clear now, he likes Aarohi, so he told his mum about Aarohi. He says I think there is a confusion, we should clear it. She says there is no confusion, come. He says I always prayed for your and Aarohi’s happiness, I feel divided between your happiness now. She says Aarohi got her love, we have to do our work now. She goes. He thinks marriage is a big thing, a small mistake can end two lives, here its about three lives. Aarohi sees Abhimanyu’s pic and smiles. Akshu comes. She says our wish got fulfilled, you wished for Abhimanyu, right, you know what I asked, I prayed that you get what you want, I m really happy for you, you got your love. Aarohi says right. Manish and Akhilesh look on.

Abhimanyu talks to the nurse. She coughs. He says methi dana… She asks what. He says nothing. She goes. He takes some coffee to sip. He says message isn’t sent, I will call her. Akshu gets his call. He says please answer, I have to go for surgery. Aarohi says he will call me, not you. She takes the call. He says I thought Akshu will answer, I didn’t think I would do this, congrats to you also, we also have a relation now. She asks what dress should I wear on tilak. He says I have to go for a surgery. She says all the best, see you tomorrow. He ends call. He says when will I talk to Akshu… He goes. He thinks of Akshu. Piya…..plays….

Manjiri isn’t able to sleep. Harsh says I have to go for work in the morning, let me sleep. She says I m restless. He says you did a right thing, stop thinking, sleep now. Akshu cries and sings kyu saath hum nahi…. She thinks of Abhimanyu and her engagement. Abhimanyu says its our tilak today, Akshara and Abhimanyu will unite forever. She says I wanted Aarohi to stay happy, when she is happy, then I can’t get sad like this, I can do anything for your happiness, then let this relation happen.

Abhimanyu calls her again. He says her phone is off, once tilak happens, I will ask her to stop switching off the phone. He leaves an audio message to her. He asks his assistant to send a gift. He writes a note for Akshu and gives to him. Akshu writes her feelings in a letter, and puts it in a box. Kairav comes. She says we will surprise Aarohi and wake her up. Kairav thinks of Abhimanyu and Akshu. He thinks how can this happen. The doctor says people think doctor’s work is easy, but doctor has to leave much things for work. The other doctor says Abhimanyu isn’t able to go home even for his tilak. Manjiri handles her work. Mahima asks her for breakfast. She asks her to make her clothes and jewellery ready. Manjiri asks Harsh to take a half day leave and come. He says I can’t. She says its fine. Shefali says I have to handle work, a reporter met with an accident, boss said I have to do his work, I will come tomorrow. Parth and Shefali argue.

Anand says you should be here today, women have to attend the functions. Mahima supports Shefali and argues with Anand. Manjiri says end this matter here. Anand says no, we can’t end it. Mahima and Anand argue. She scolds Parth also. Shefali says sorry, I really have to go, I will talk to Abhimanyu. She goes. Anand and Harsh also go. Parth says sorry, Abhi and Aarohi’s lives will also have this work pressure. Manjiri says we have to think good, Abhi’s marriage will be good. Dadi asks everyone to do preparations. They all talk about Aarohi and Abhi’s alliance. Dadi says forget everything and prepare for tilak. Aarohi says tilak is mine, then things should be as I want. Vansh jokes. Akshu says that’s why, we are doing her bidaai soon. She asks Aarohi to have juice. Aarohi says I called the hospital, I got to know he is busy in back to back surgeries, its such a life of doctors, we will work together and have another type of romance. Akshu gets sad. She asks Aarohi to be happy and keep smiling. They hug. Kairav looks on. Vansh says see what Abhi has sent for his would be bride. Aarohi runs and takes the gift. She says how sweet, he is so caring, he sent a special gift for me. The note falls there. They see a heart model.

Akshu says who sends such a heart. Aarohi says wow, its unique, he is so different. The juice falls on the note. Akshara’s name gets wiped off. She says sorry and goes. She gets a panic attack. Abhimanyu asks someone to sing. Nurse asks him to sing, because he sings really bad. He says yes. Akshu thinks of Abhi’s humming. He hums a song. She also hums. She calms down. Kairav knocks the door. She opens the door. She says I came to clean my dress. He says dress has no sign, you were crying, right. She says no, it was my mistake. He says I can’t believe this. She says no, I was thinking wrong. They see Aarohi there. Kairav goes. Parth and Neil check the arrangements.

Neil says Aarohi isn’t good for Abhi, why didn’t he choose Akshara, she is better than Aarohi, she is like mum. Manjiri hears them and scolds Neil. She says I didn’t hear Abhi’s voice since morning, I have to ward off bad sight, I m restless, its not good. Anand and Harsh come. Anand asks her to send Mahima’s clothes to the hospital, she will come directly from there. Mahima says sorry Abhi, I had no way, I love my sister Manjiri, until she is behind me, Manjiri would have stepped ahead of me if this confusion didn’t occur, sorry, I had to do this. Akshu gives Sirat’s earrings to Aarohi. She says you are marrying first, so this is yours. Aarohi cries and hugs her. Akshu asks her to get ready. Birlas come to Goenkas house for Tilak. Manish introduces the family. Anand introduces his family. Vansh says Neil and I are old friends.

Akhilesh asks whose son is Neil. Anand says he is like our son. Dadi says he took care of us during the trip. Manjiri touches Dadi’s feet and greets. Dadi says you are lovely, your son is just like you. Suwarna says he said, you taught him to respect elders. Suwarna does their aarti. Manish asks where is Abhimanyu. Parth says he is coming directly from the hospital. Akhilesh says we understand, work comes first for doctors. Anand says surgeons, not doctors, you should know their difference. Akhilesh says Aarohi is the first doctor in our house. Manjiri asks Parth to call Abhi and ask if he left. Abhimanyu says finally, surgery is completed. Nurse asks him to go for his tilak. He checks Manjiri’s messages. He says Akshu didn’t check the messages, Aarohi has messaged so many. Mahima looks on. He gets Parth’s call. Mahima says I will talk to him, go and wear sherwani fast, you don’t have time. Everyone wishes him all the best. She says we are reaching in 30 mins.

Abhimanyu goes and sees his sherwani. He says I had much work today, I didn’t had time but even this I missed you, is this love. Akshu and Aarohi get ready. Aarohi asks how do I look. Akshu compliments her. Aarohi says thanks Akshu, I m so happy today. Kairav calls them and says they have come. Akshu worries. Abhi drives fast. Mahima asks him to drive slow. He says I can drive fast, but not wrong. She says I was helpless to come with you, please focus on the road. She thinks if the truth came out, then drama would have started, else it will start after we reach.

Precap:
Akshu sings. Abhi comes there. He is blindfolded. Vansh asks him to make his love wear the ancestral bangles. Abhimanyu makes Akshu wear the bangles. Aarohi gets shocked. 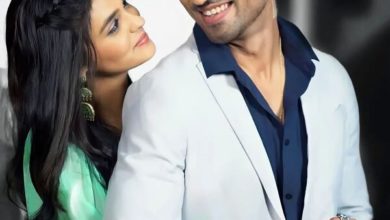 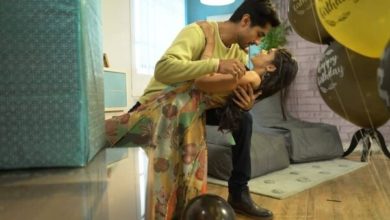 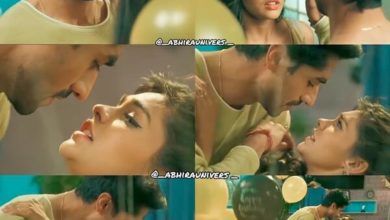 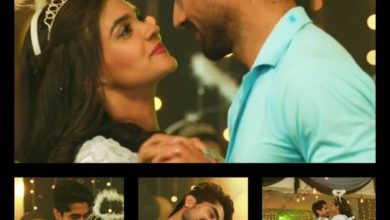