Preeta mentions arjun took Kajal from her eyes and applied the tika so how can he do this, Arjun questions Rakhi if he did anything wrong when Rakhi replies that anything done with a good intention is not wrong, Preeta leaves angrily saying now she is also taking his side. Rakhi tries to stop her but Preeta doesnot listen, Arjun exclaims she is like this and is like a bitter cord, Rakhi replies karan used to talk about her in the same manner when arjun exclaims this means she is like that, Rakhi leaves with a smile.

Prithvi is riding the motorcycle while singing when Raja stops the bike, Prithvi says he can do whatever when they reach the house but Raja replies to the petrol has ended in the bike, prithvi exclaims why is he so unprofessional since they came to break him from jail. Vishnu mentions he can bring the petrol from the petrol pump, prithvi replies they do not have their own mobiles when Raja questions if this means he is not going to give them their money,

Prithvi mentions raja should say if he looks like a liar and thief, Raja replies that he indeed seems like a liar and thief, Prithvi replies he should once again say what he looks in the eye, raja mentions he seems a really nice person. Prithvi assures he will make them rich if they just do what he asked them to, Raja assures hearing which Vishnu mentions this is cheating and they were the best of friends. The lawyer assures they both would still be friends but must know Prithvi is an amazing person.,

Prithvi explains he is good to bad people since they are fair with him but those who act to be nice but are evil, would have to pay the price for ruining him. Raja mentions he is talking about Arjun, Prithvi in frustration exclaims that he is surely going to make Arjun understand how wrong he has done to him.

Sameer requests Shristhi to not be angry with him since he has apologized, Shristhi replies she wants him to love her, he assures he loves her a lot. Shristhi replies she wants him to appreciate her work and compliment if she does something good, Sameer praises her for doing such a good work, Shristhi explains he praises her after she compliments her own self. Sameer tries to touch her legs but she takes a step back, Sameer exclaims he is going to surely apologize to her. Sameer mentions that Preeta Bhabhi is coming so she must not fight with him, Shristhi replies she doesnot want to give her sister any more tension. Sameer leaves Shristhi when Preeta informs that she heard Arjun likes Shristhi, she requests her to not panic and stay away from him but Shristhi leaves replying that she feels nice.

Bi jee is sitting with Janki when Shristhi comes and causes her to be dizzy, Bi jee asks her to understand Janki is not that young but old now, Janki replies she is still younger then Bi jee but she gets angry exclaiming that her entire family is old, Janki mentions they should not talk like this, Bi jee reveals she is the girlfriend of Arjun however Shristhi replies Preeta di just told her that Arjun likes her, she sees Anjali walking so warns her that she must stay away from Arjun since he likes her, Anjali replies she can do whatever she desires before walking away.

Anjali calls Rishab, she asks why did he tell Shristhi that she likes arjun and she is not interested in any competition, Rishab at once apologizes explaining he never intended to spread it all but is extremely sorry, Anjali exclaims even then it is not true since she doesnot like him, Rishab assures he would correct everything but Anjali is worried what he might do once he finds the truth, Rishab mentions he is a nice person so would not do anything wrong but he is still going to correct everything and until then she can have a drink.

Rishab walking mentions he first saw her and then the flower so feels she must have it, Shristhi exclaims that Arjun likes her when Rishab replies that everyone loves her, Shristhi exclaims he doesnot love her so Rishab questions if he has to tell her constantly that he likes her. Rishab mentions that Janki aunti knows he liks her and even Dadi knows it, Daid replies he even gave her a flower but not like karan as he did not make any new girlfriend after her, Rishab kisses her hand, so she gets nervous.Rishab clarifies whatever he said about Arjun and Anjali was wrong since it is his mistake, they all hearing it immediately run away which worries Rishab.

Mahesh standing is thinking how Rakhi said that arjun also accepted her order when she got strict with him, Arjun sees him when he comes to ask Mahesh why is he so tensed and that his face might even make the moon sad. Mahesh replies it is nothing like that, Arjun explains that moon and love have a deep relation as they look at it when their heart is broken and even when they have a girlfriend,

Arjun exclaims Mahesh might have heard the song which makes Mahesh smile, he exclaims that he did not know Arjun would be able to talk about the moon and romance but his conversation today made him feel a little emotional and happy. Mahesh explains he searches for Karan in the moon but is not able to find him anywhere. Mahesh explains he feels as if Karan is standing in font of him when he sees Arjun, he not able to control himself hugs Mahesh. Preeta is also not able to bear it so gets emotional.

She is about to walk away but Mahesh calls her close, saying she should tell him that he looks like Karan and they all talk about him saying Arjun behaves likes Karan and even talks like him, mentioning how he is the shadow of Karan so she must say if she also feels the same. Mahesh leaves after getting a call.

Preeta stands beside arjun, he calls her asking if she also misses karan the same as the rest of the family members and does she also feel some of his habits are like Karan. Preeta turns towards him with a tensed face, she is constantly thinking about how he also helped her just as karan used to do, and she felt the same feeling applying the ointment. Arjun says she did not answer him.

Sherlin opens the door and is stunned to see Prithvi, he exclaims she thought he would not attain the bail if she never helped him, he is rushing inside the house vows to ruin everyone but is shocked to see the broken remote. Sherlin hugs Prithvi when he gets worried asking what happened, Sherlin replies she is fed up with this life when Prithvi explains it all happened because of him as her mother refused to take her in because of him but must give him some time since everything would be fine.

Prithvi exclaims he can do anything but not look at any girl with an evil eye as he himself hates such women, but he has had enough of Arjun, however he doesnot know that Prithvi doesnot give a reply with stone but a mountain. Sherlin vows to ruin the life of Arjun when Prithvi explains therefore they all have come, Sherlin doesnot understand when Prithvi calls Raja and Vishnu inside, he informs he has come to take the pen drive that will ruin the life of Arjun.

Arjun asks Preeta if she doesnot miss Karan, she replies she doesnot but then clarifies she meant she doesnot want to talk about Karan with him, Arjun is stunned. 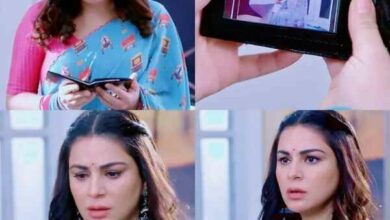 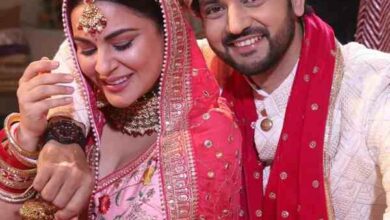