The Episode starts with Raj saying Gunjan had come to meet you, you weren’t there so she left. Choti and her husband come home. Everyone gets happy. Choti apologizes to Manmeet. She says sorry, I had vented anger on you, I guarantee you, you won’t get any chance to complain, Badi told me how you took them to office, I got to know this about mom because of you, thank you so much. Manmeet smiles. Bhairav asks what were you going. Choti says we will make everything good, we will have love and friendship, then something will happen, Manmeet will be out of our house.

Bhairav asks what will you do. She says I will play a game with her, I will lose and win her trust, then its my win, send Raj away. He says I will send him, just see. He calls Raj. Raj stares at Manmeet and smiles. He gets Bhairav’s call. Bhairav says agents gave done something wrong, we can’t lose our this work, we have to go to Jharkhand and solve this. Raj says I will go. Bhairav asks how will you go, you didn’t go to visit Kuldevi and also on honeymoon, Murari and I will go.

Raj says no dad, you aren’t unwell, I will go. Bhairav asks how can we send you. Manmeet says I will go with Raj, how will you go, I insist, you take rest. Bhairav asks who will handle the office, let Raj go. She says I don’t know Raj did land deal before. He says let him go, he will gain experience, can he go. Raj says yes, when shall I leave. Bhairav says tomorrow morning. Raj says fine. Choti happily hugs him.

Ajeet asks did anything happen with Manmeet. Puneet says no, I m worried for Gunjan. He says everything is fine at her place. She says you don’t know, she stays afraid, she keeps crying, I didn’t see her talking to Roshan till now. Bhairav calls him and says I got to know you came today from Shimla, I have to talk to Puneet. Ajeet asks what. Bhairav says Nirali wants to talk to her. Nirali and Puneet have a talk. Nirali says I have kept a small party at home, I wanted to invite you.

Puneet says Manmeet didn’t tell us. Nirali says it’s a surprise for Manmeet, we will make a new start, will you come. Puneet says yes, sure. Ajeet says we have to go. Raj and Manmeet come home. The family members give them a surprise. Manmeet meets her family. She says you didn’t tell me. Ajeet says we would have not got this happiness. Choti says thanks for coming, happiness came home because of me. Raj looks on.

Choti apologizes to Manmeet. She says we will make a new start. Manmeet hugs her. Bhairav asks Ajeet to come for drinks. They drink. Murari says everyone is waiting for Bhairav. Bhairav and Ajeet join the family games. Raj and Manmeet smile. Murari gets a call. He asks Bhairav to talk to Khanna. Bhairav says Murari, I have kept a bag in my study, it has 4 crores, get 2 crores from it. Murari goes.

Gunjan thinks to help herself. She goes. Bhairav looks on. Murari goes and gets the money. He leaves from the room. Gunjan goes there and steals the money. She drops the bag. The money bundles fall out. She picks the money. Someone comes. She gets worried. 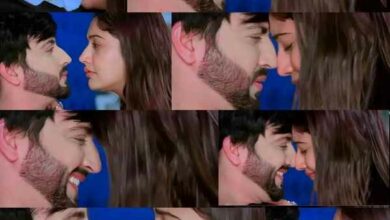