Virat asks Sai if she decided to stay again in his room. He asks her not to worry as she will not disturb him again, she came to take her belongings. He says he himself would have dropped her bags in her room. She asks if he is acting and asked aayi/Bhavani to shift Sai to another room when she gets discharged from hospital. He says even he found out just today. She says she believes him and goes to pick her bags. He says he will drop her bags to her room. She says she needs her Aaba’s photo. He opens bag and gives her Aaba’s photo. She gets happy. He says they were staying in same room and didn’t let him realize her plan of leaving house.

She says let us forget the past, he knows its easy for her to fool the great ACP Virat Chavan. He says she didn’t fool him but betrayed him, hence she had to return here. She says there is nothing like that, he must be happy though when she left home. He says he never asked her to leave home. He says he was showing so much care in hospital and was braiding her hair, but now showing his dominance again. He asks when did he. She says how will he when Aayi asked them to stay in separate rooms, but from what she knows, husband and wife stay together in same room, even his bestfriend said same.

He asks why she drags Pakhi between them always. She asks what is their relationship now. He smiles and says its a good question. She says its poetic also. He laughs and says she is very filmy. She asks again what is their relationship now. He says he doesn’t have answer to this question, does he have it. She says even she doesn’t and Aayi must be having the answer. He says must be.

Pakhi enters and sprinkles pooja water on them. She taunts that Ashwini announced that Sai and Virat will stay in separate rooms, she was thinking that she should visit 2 different rooms to sprinkle pooja water. Sai says she was about to go. Pakhi says it looks like she came to gossip with Virat. Virat says staying in different room doesn’t mean Sai cannot visit his room. Pakhi says she doesn’t need his justification or know their relationship. Sai murmurs even Pakhi wants to know about their relationship.

Pakhi says there is nothing to murmur, she just spoke what she saw, they are together even now. Sai says when she and Virat can do pooja together, they can chat also; anyways Pakhi came with a good intention and should finish it and go. Pakhi again sprinkles water on Sai. Virat gets angry and warns her to behave. Sai says its okay as Pakhi is worried for her and gave Bappa’s blessings like she brought her chair during pooja. Pakhi leaves burning more in jealousy. Virat asks Sai to go to her room and let him bring her bags later. She agrees and leaves.

Omkar applies medicine on Sonali’s hand injuries and says he can’t believe she was insulted today. Sonali says even he couldn’t speak against Bhavani. Omkar blames Sai. Karishma brings icepack for her. Omkar says her hand burning may heal, but seeing her pain his heart burning will not evade so easily. Virat takes Sai’s bags to her room and seeing her climbing a chair to fix Aaba’s photo stops her and says he will do all her work. She says he became too caring after she left his room.

Ashwini brings food for her and says Virat is her son and has her sanskars, he has a very helping nature. Sai taunts Virat. Their nok jhok starts. Ashwini asks them to stop fighting and says Virat will help Sai decorate her room as a friend. Sai asks friend? Ashwini says she didn’t say husband or boyfriend but just friend. She forces Sai to finish milk. Sai she wants to know about her and Virat’s relationship. Virat asks why she thought they should befriend. Ashwini remembers Dr. Anjali’s advice.

Sai says now Virat cannot fight or lock her in a room. Virat asks not to remind him about his mistake as he already apologized her. Sai says a friend Virat is very good who is apologizing her instead of yelling at her. Ashwini says they should shake hands and forgetting all their bitter past start their new friendship. Sai and Virat shake hands smilingly. Ashwini prays god to make their friendship forever. She then offers Bhavani’s prepared modak to them. Sai says she wants to thank Bhavani for modak.

Virat says Aayi decorated Sai’s room better than him. Sai says its obvious. Ashwini leaves saying she needs to give milk to Ninad. Virat fixes Aaba’s photo on wall and asks where should he keep her books and other stuff. She guides him. He gests confused and asks her to order properly. She sits on chair and orders him like a boss. He stands smiling and calling her a queen asks to give order one by one. She says she will think. Their nok jhok continues and they both laugh.

Precap: Virat and Sai miss each other.
He walks to her room and sees her sleeping. Ashwini catches him and says they should give Sai some time to make her realize how much she is connected to him. 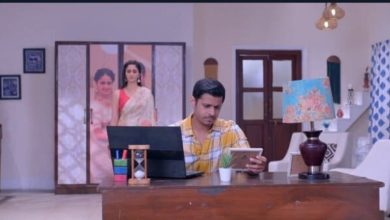 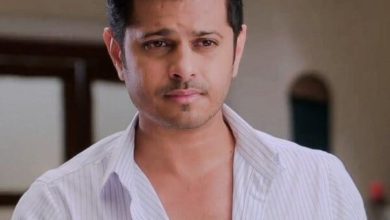