The Episode starts with Akshu getting ready in the room. Abhi tries to control and not see her. He switches on the laptop camera and sees Akshu behind him. He sees her necklace and says not this one. She wears the one of his choice. Jaaniye….plays… He smiles and says oye… Her earring falls and she says oye. She turns to him. He shuts the laptop. She sees him and says oye. His paper falls and he says oye. They both see each other. Tujhse roohdariyaan…. Plays.. He gives her the sindoor box. She recalls his words. She applies it herself and says thanks. He says mention not.

Suwarna asks Manish why are you worried, are you thinking of Mahima’s words. He says she meant that our pride will break because of Akshu. She says but we trust her. He says yes. Dadi asks him to come for puja. He says okay, then I will go to Jaipur and meet Akshu. Dadi worries. Shefali greets the ladies, and says Manjiri doesn’t know about Abhi and Akshu, don’t tell her anything. The lady asks Shefali not to worry, they won’t say anything. Aarohi comes there and sees the family. Abhi and Akshu come downstairs.

Aarohi doesn’t see Akshu. She says why did Abhi get so decked up. The light goes. Aarohi says great, it’s a good chance to go inside. Abhi says I will check the fuse. Aarohi enters the house. Akshu goes to help Abhi. She collides with Aarohi and goes. Neil takes Aarohi aside. He says if anyone sees us, then it will be a problem, come with me. Nishta gives the torch to Akshu.

Akshu thinks how can Aarohi be here. Aarohi says I m feeling hungry. Neil says me too. She says moon isn’t out. He says we can see the moon online and break the fast, some people see the star and break the fast. She says really, then there is the star, I will get the plate and channi. She goes.

Aarohi sees Neil through the channi. Neil guides her. Abhi and Akshu hear Neil and go to see. Neil and Aarohi compliment each other. Aarohi does his aarti and breaks his fast. He also breaks her fast. Abhi and Akshu see Neil with someone. Abhi says Neil is celebrating Karwachauth. Akshu asks but with whom. Neil sees them and runs with Aarohi. Akshu asks where did he go. Neil says I thought he had a breakup, he didn’t learn anything from me. She asks what’s there to hide.

She gets a bangle there. She says it belongs to Sirat. Abhi asks are you sure. She says I m not sure but I have this feeling. She runs to see. Abhi says you will fall down, take the torch, there is darkness. Aarohi says let them see, what’s the big deal. Neil says we have celebrated Karwachauth, get happy please, love you, go. She sits in the cab. Akshu runs to see. The lights come back. Akshu gets shocked seeing Aarohi in the cab. Aarohi also sees Akshu.

Akshu says Aarohi here on Karwachauth day. Aarohi says Akshu is here on Karwachauth day. Akshu says Aarohi… Abhi comes and asks Aarohi, it means the girl with Neil was Aarohi, when did this happen. He recalls Neil’s words. He says now I understood, why he didn’t tell me about his GF, he has hid a big thing, there are many issues between Birlas and Goenkas, he got this new angle, we have to handle this, else this matter will come out, mum isn’t well, there are guests in the house. He says like you have seen Aarohi, did she see you too.

She says I don’t think so. She says pray that she doesn’t tell anyone if she has seen you. Aarohi says Akshu is lying and meeting her husband when she got separated, I will go home and tell them. Abhi asks will Aarohi hide the truth. Akshu says Manish will feel bad if he knows this, he will be much hurt, he trusts me a lot, I don’t understand about Neil and Aarohi. She panics. He holds her and saves her from falling.

He asks her to calm down, she is getting a panic attack. He asks her to sing. She signs no. He says please sing. She hums a tune. She calms down. They have a moment. Jaaniye….plays… Shefali calls them to break the fast, the moon is out. Akshu says they are calling us. He asks her to come. 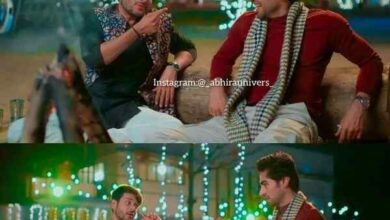 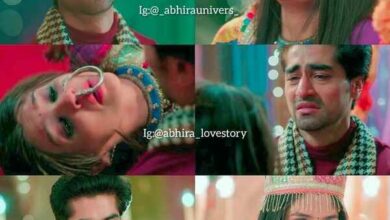 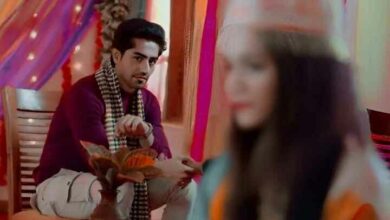 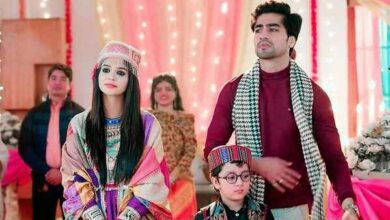