During youngsters’ party at Anupama’s house, Samar invites everyone for a dance. Anupama observes Pakhi and Adhik’s attention towards each other and joins them. Anuj with Ankush return home from office and asks how can they party without him.

Sara says it’s youngter’s party and not senior citizen’s. Anuj says he will teach them what party is and dances with Anupama and others on Kajra Re.. song. Anupama observes Pakhi’s attraction towards Adhik. Barkha watches them from a distance smiling.

Vanraj gets upset when his children visit Anupama’s house and expresses his concern towards Pakhi in front of Leela that she gets mad seeing the lavish lifestyle and he can’t lose his children. Leela says he is right.

Barkha asks Ankush how was his first day at office. Ankush asks him to let him enjoy the party first and says Anuj and Anupama don’t differentiate between children, so even she shouln’t. Barkha says it wouldn’t take much time. Ankush says everyone is not like her.

Anuj asks Pakhi to click selfie for her social media account. She does and uploads pic. Vanraj shows it to Leela. They all then play guess the picture game, and Barkha makes girl’s win. Kinjal feels uneasy and stumbles. Girls mock boys.

Anupama asks everyone to end the party now as Anuj and Ankush must be tired now. Anuj says he is not and mimics her that even she must be tired. Sara requests Anupama to give them 30 minutes more. Anupama agrees. They all then insist to watch Anupama’s dance.

Vanraj sits upset recalling Pakhi’s behavior. Hasmukh walks to him and asks if he didn’t sleep yet. Vanraj misses kids. Hasmukh misses kids too. Vanraj says he should be ready to take care of Kinjal’s baby. Hasmukh says let Anupama take care of the baby and realizes Anupama doesn’t stay with them.

Vanraj says he will take care of the baby and says he doesn’t want to send Kinjal to her mother’s house. Hasmukh says that decision should be of Kinjal and says nobody ca take care of a child like a mother. Vanraj asks not even a father. Hasmukh says his children at not near him doesn’t mean they don’t love him.

Anupama dance on Nainowalon Ne Chedi Madhushala.. song. Kinjal gets up to get something. Barkha also gets up looking at her mobile, slips, and pushes Kinjal. Kinjal falls on her stomach and shouts in pain. Anupama shouts Kinjal.. in shock.

Vanraj senses the trouble and wakes up from sleep. He tells Kavya that he feels uneasy as if something wrong is going to happen. He checks the whole house for safety. Kavya asks him to relax as everything is alright. Toshu rushes to him and informs him about Kinjal’s accident.

Pakhi gets afraid thinking of Vanraj’s reaction. Vanraj enters with Hasmukh and Toshu and gets angry hearing Barkha saying that Kinjal fell because of her. Barkha pleads that she didn’t do it purposefully and it was an accident. Vanraj says every accident happens similarly. Ankush warns him to stop shouting and supports Barkha. Vanraj warns him back. Hasmukh calms him down.

Toshu says he will rush to hospital. Hasmukh asks him to check with Samar which hospital they have gone. Vanraj warns them to pray that Kinjal and her baby are fine or else he will not spare anyone. Anupama returns with Kinjal and cries repeating soorrry soorryy. Vanraj worried asks her to say what happened.

Precap: Vanraj accuses Anupama that baby had come to meet its grandmother, but Anupama Kapadia stays here and hence his DIL and grandchild will not visit Anupama’s palace. 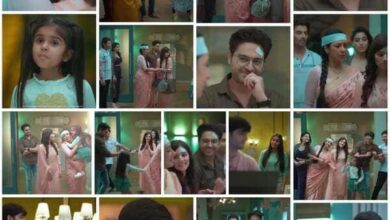 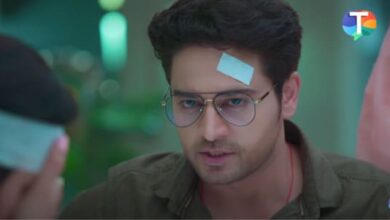 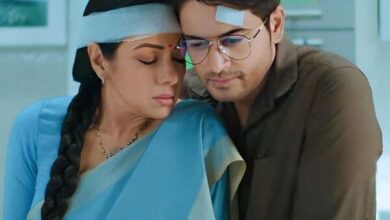 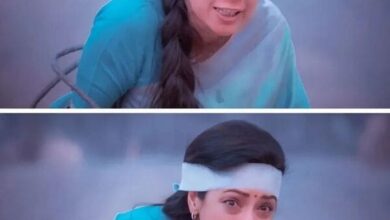