The episode starts Rishi telling Neelam that Lakshmi will not return in this house and says we don’t need her. Neelam says we need her. Rishi says we don’t need her. Neelam asks him to stop saying this. Rishi says everyone stopped living with the thought of my death. He says we have to stop thinking about kundali dosh, and tells that your Pandit ji says anything. Neelam says whatever Pandit ji told until now, came true and says Lakshmi has saved you. Rishi asks what about today? He says nothing has happened to me today even with iron, and says Pandit ji’s words haven’t come true as Lakshmi is not with us today. Ayush hears them.

Lakshmi tells that halwa will get cold and then it will not taste like before. She makes her sisters have halwa. Shalu then makes her have halwa. Lakshmi smiles. Rano thanks someone and tells Neha that they got lawyer’s number. Neha says if Rishi had married me, then I would have been abroad and lived a lavish life. Rano says it is good that Lakshmi got married to him, and tells that she will accused Rishi of having affair, tortured Lakshmi etc. She says she will get a big amount from them, Lakshmi and Rishi will not meet and we will get crores.

Rishi thinks of Lakshmi’s words and picks the wet cloth from the bed. Lakshmi tries to sleep with her sisters. Rishi tries to sleep and gets flashes of Lakshmi. He closes his eyes, but can’t sleep. Lakshmi also couldn’t sleep and thinks of Rishi. He gets up and thinks he is not that bad. He tries to call Lakshmi, just then Malishka’s call comes on his mobile. Malishka says I was waiting for you, you didn’t come. He says Mom was stressed, we will meet tomorrow. Malishka says ok and tells that she was missing him and thinking about him. He says me too. Ayush comes there and asks Rishi if he has spare phone, as his phone fell down and display broke. Rishi gives his phone. Ayush calls Lakshmi. Lakshmi sees Rishi’s call and doesn’t pick the call. Ayush returns the phone to Rishi. Rishi says I have ordered new phone for you. Ayush thanks him and asks did you talk to her? Rishi asks with whom? Ayush says nothing. Lakshmi thinks she shall not think about Rishi and tries to sleep.

Shalu asks Lakshmi if she didn’t sleep all night and cried all night. Lakshmi says I had applied village surma. Shalu says it was over and asks if you was God to stop yourself from crying and asks her to cry and vent out her pain. She asks her to give her sometime to come out of the trauma. Lakshmi says Chachi is not like I thought, and says she tried to send me there, don’t know what she can do with you both.

Shalu asks Lakshmi to give herself 2 days. Lakshmi says if I stay busy, then I will not miss Rishi. Rishi searches for his phone and recalls Lakshmi asking him to check where he has kept his phone. He opens the cupboard. Just then his phone rings, and it is on the drawing table.

Rano is about to take tea. Bani says I have made tea for Lakshmi, as you was sleeping. Lakshmi says I forgot to take jewellery store address. Shalu tries to feed her food. A lady takes the call and asks her not to come, as she didn’t get the job. Lakshmi says I talked to Darshan sir. The lady says Darshan is habitual to give jobs in charity, but we have no vacancy. Lakshmi says I need job. The lady ends the call.

Rano comes there and takes the paratha plate from Shalu’s hand. She says Lakshmi has badluck in her life and tells that she will not change her words and wants 8000 Rs rent, else she will throw her and her sisters from here. Lakshmi says I will not change my words, if I promised to give you rent, then will give. She says she has trust on herself as matter is about her sisters.

Neelam asks Rishi where is he going? Rishi says I can’t live scared and asks her not to be scared. He says I don’t believe on markesh dosh and kundali. Neelam says you are saying this due to Lakshmi, and says she did a big mistake by making a mountain out of nothing. Rishi says it is not Lakshmi’s mistake, if she don’t want to come here, then I can’t force her to come home. Ayush thinks when I tell you that you are wrong, you says Lakshmi is wrong, but when someone blames Lakshmi, you take her side, and says you are in deeply love with her.

Lakshmi tells that she will trust her and Mata Rani. She says this is Mumbai and the dreams get fulfilled here. She says we will see the dreams and fulfill it too. She says everything will be fine. Rano says I feel bad for you, and asks her to do whatever she wants, but don’t be sad. She pretends to be teary eyes and goes.

Lakshmi says I will go for another interview today. Shalu says Bau ji was not wrong, you are the girl on whom everyone shall be proud of, and says you are broken, but handling yours and us.

Precap: Rano comes to Neelam’s house and says you have done whatever you want to do, now Lakshmi will do what she wants to. Rishi prays in the temple that he wants to meet lakshmi and wants to tell her. Lakshmi is also in the same temple and thinks she don’t want to think about Rishi. Rano asks 50 percent compensation as alimony. Lakshmi and Rishi see each other. 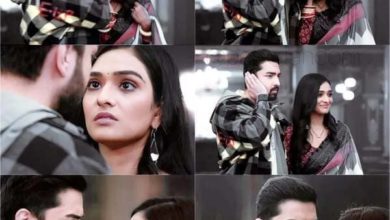 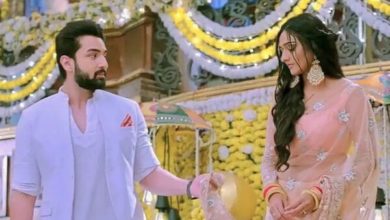 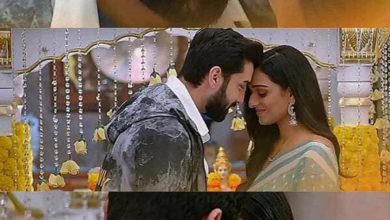