Anu calls Imlie and Aryan to come fast. Anu rushes to her and asks what happened. Anu asks her to click lehanga pic and show it to even her mother as they both wouldn’t have seen a 15 lakh rs expensive lehanga in life. She asks Malini to wear this lehanga and get ready for her pheras. Salesman says this lehanga is for Imlie. Anu asks if he is crazy, she ordered this lehanga for her daughter. Another salesman bring Anu’s ordered lehanga.

Malini says that lehanga’s dupatta is more beautiful than bridal one. Imlie says there must be some misunderstanding as she cannot afford it. Anu says she is right and orders to take it back. Aryan stops salesman and says he ordered it for Imlie and she will wear it today. Imlie says she cannot wear this expensive lehanga. Anu asks her to stop her drama and says her plan is to trap rich man and increase her standards. Arpita supports Imlie and says Imlie never sought anything from anyone. Anu says she creates a situation were men themselves get ready to shower money on her.

Aryan says his team should always be ready, his reporter’s dress was torn and hence he bought her a new dress. Anu asks why such an expensive lehanga only for Imlie, this looks more like a personal issue than personal. She taunts servant Imlie that she upgraded herself from village to a 15 lakh lehanga so soon. Aryan replies that she acts cheap by price tagging her daughter’s bridal lehanga, he doesn’t speak to cheap people. He orders Imlie to go and change. Imlie walks away.

Imlie blabbers venting out her frustration on Aryan. Aryan walks in front of her and asks to stop blabbering, change her dress, and get back to work. She asks if he is her school principal or mother that she should obey his order and wear whatever he orders, he wasted money, she doesn’t need it, etc. He warns her to shut up, she is neither her client nor business partner, that lehanga is a big designer’s design copy and not that expensive. She denies to wear it. He asks why she takes Anu’s words so seriously. Narmada with Arpita walks to them and tells Imlie that Aryan cannot understand Imlie’s problem, but she does; she should wear that lehanga as her and Arpital’s gift. Imlie agrees.

Malini gets ready in her bridal dress and smiles. Anu asks reason. Malini says Aryan provokes Adi more by giving that lehanga to Imlie; her fight is not for lehanga, she wants to win Adi back and will win him today; Imlie stooped so low to snatch her happiness and its end of her day today. Anu says her happiness would double if servant senior can watch her marriage. Dev walks in and criticizes that they both are doing mistakes by competing with Imlie and Mithi. Anu tells Malini that her father betrayed her for a villager and then villager again, he is a habitual betrayer. Malini asks Dev if he will not attend her wedding. He says he will when she will realize her mistake and walks away. Anu asks her not to bother about her father’s bitter words and cheer up for her wedding.

Adi notices Imlie in Aryan’s gifted lehanga and remembers Aryan’s words. Malini walks to him and asks how is she looking. He looking at Imlie says beautiful. She clicks selfie with him. Imlie feels disheartened seeing them and clashes with Aryan. Aryan scolds her to watch out. She yells lehanga is so heavy that she cannot concentrate. Their nok jhok starts. Her dupatta gets stuck in his cuff. He frees it and walks away yelling junglee. Arpita notices them and thinks he will be a fool always. She then walks to Sundar.

Sundar imagines a duet song with her as usual and then getting out of imagination asks her to leave. She asks him to go and asks what is he doing in kitchen. He touches her and says he thought she is his imagination. She says she is Arpita. He asks why she looks tensed. She says they both/Imlie and Aryan are so adamant. Their discussion continues. Pankaj asks Sundar if he saw Adi. He says no and thinks Adi must have gone to commit suicide. Imlie walks on bridal path. Guests praise her beauty. Anu pushes Imlie away yelling she made his pathway for her daughter and not a servant. Imlie remembers her wedding with Adi and thinks its a funeral of her love and not mandap, she shouldn’t be here. 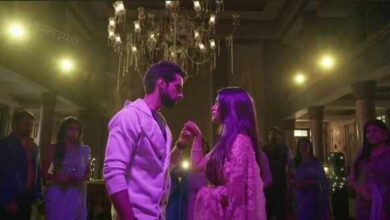